Research into waste management is a major part of international nuclear policy. New work offers an in-depth look into one solution, glasses. 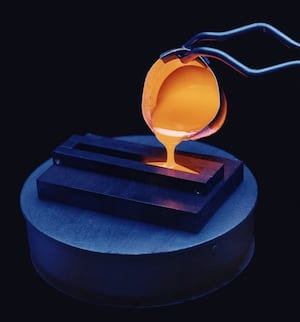 This article was originally published on the Ceramic Tech Today blog of the American Ceramic Society.

While nuclear energy policy issues are being worked out on a nation-by-nation basis, research on technological challenges continues apace, at least for now. Disposal of high-level nuclear waste is an essential, but expensive, part of the nuclear energy cycle.

Nuclear waste glasses are borosilicate compositions. Aluminum from fuel rod claddings enters the waste stream and brings a fair amount of sodium along with it. (Aluminum cladding is dissolved in nitric acid, which is then neutralized with sodium hydroxide.) The aluminum concentration limits the amount of waste that can be loaded into a glass composition because the presence of it and sodium leads to crystallization of nepheline (NaAlSiO4).

Precipitation of nepheline has two detrimental effects. First, it pulls glass forming constituents out of the glass, and second, nepheline has less long-term durability than the glass phase. The first effect-loss of glass formers-reduces the waste load that can be accommodated, which means increased costs to produce and store larger volumes of waste glasses.

A key question is how much aluminum can be loaded into the glass formulation. A new paper published in the International Journal of Applied Glass Science looks at this question. A group out of the Pacific Northwest National Laboratory compiled historical data for 523 simulated waste glass compositions and analyzed the amount of nepheline crystallized as a function of composition.

Two approaches were used: plotting of nepheline volume fractions on the Al2O3-SiO2-Na2O phase diagram for three boron content ranges, and mapping of compositions into a quadrant system based on two indicators, those being “nepheline discriminator” and “optical basicity.”

The quadrant system evaluates compositions based on a plot of optical basicity against “nepheline discriminator.” The ND is a composition-based index to predict compositions that are more susceptible to nepheline crystallization and is a function of the silica content normalized to the overall composition.

Optical basicity is related to the overall state of oxygen in the glass melt, and therefore is related to the glass structure. (It’s linked to the dissociation of silicates to produce oxygen ions in the melt, similar to the way acids dissociate to produce hydrogen ions in aqueous solutions.) OB is useful to predict trends in transport properties, such as viscosity, diffusion, electrical and thermal conductivity, etc. It is expected that nepheline will not form for compositions below a certain threshold ND and OB levels.

Data were analyzed with these two frameworks for 523 compositions.

Two results emerged from the phase diagram plots: the nepheline formation region is smaller for higher B2O3 compositions, and there are regions in the low-Na2O side of the ternary where nepheline does not form, despite high alumina contents.

The ND analysis showed that nepheline formation is suppressed for high-silica compositions. Nepheline crystallization is not expected for low OB values. The paper explains, “Reducing OB requires adding acidic components or removing very basic components.” That is, to reduce the OB in high-Al2O3 glasses, Na2O must be reduced (increasing Al2O3 content), or substituting in lower basicity alkali or alkaline earth elements, or increasing B2O3 content. The paper notes, “A trade-off is reached when adding components that reduce waste loading.”

By working the trade-off, for example, by using ND to identify favorable compositions on the ternary diagram and then modifying compositions for optimal OB, it may be possible to expand the “composition space [that] is available for formulating high waste loading.”

This study only considered the thermodynamic aspect of crystallization, but the authors note that the kinetics of cooling and heat treatment are important in the nucleation and crystal growth process. The researchers suggest that kinetics also may help expand the range of desirable waste glass compositions.

Turning waste heat from solar panels into a water distillation process
A high-capacity battery material developed from salmon DNA
Where in the world will direct air capture be most effective?
Key battery metrics identified by Johannes Betz