Studying the gasification of pinewood char 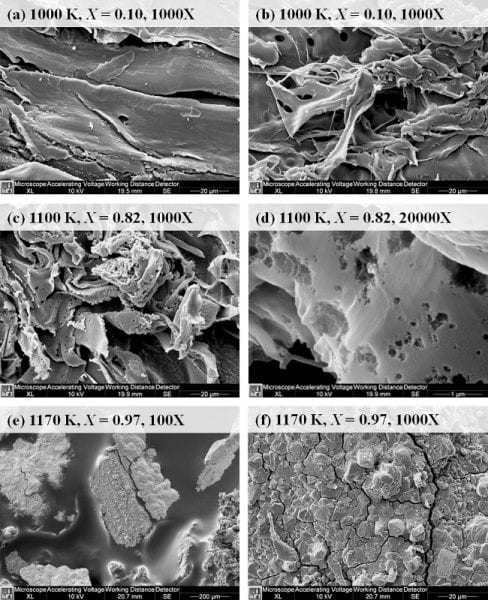 SEM images show pinewood sawdust (top) and char (below) using a Philips XL40 FESEM at 1,000 times magnification. The sawdust contains smooth surfaces divided by parallel walls. In contrast to the sawdust, the char surface appears rough because of randomly oriented fibers that exhibit significant wrinkling. Numerous wide tunnels protruding into the char particles are observed. These tunnels provide pathways for transport of CO2 into the particle. Image: Purdue University/Indraneel Sircar.

Researchers at Purdue University have successfully tested the conversion of large particles of pinewood char in a gasification process, a step necessary for the mass production of synthetic liquid fuel from recalcitrant biomass.

The results stemmed from a series of experiments using a new facility at Purdue’s Maurice J. Zucrow Laboratories aimed at learning precisely how biomass is broken down in reactors called gasifiers as part of a project to strengthen the scientific foundations of the synthetic fuel economy.

“The results of the study show that the apparent gasification rate parameters for relatively large particles of practical relevance are comparable to those obtained from laboratory studies with much smaller particles,” said Purdue mechanical engineering doctoral student Indraneel Sircar, a graduate assistant at Zucrow Labs and paper co-author. “On a larger scale, this research is a small part in the goal of creating a more sustainable synthetic fuel economy.”

Synthetic fuels currently are being blended with petroleum fuels for performance improvement in automobile and aircraft applications and also are used in equipment trials in commercial aircraft. New techniques, however, are needed to reduce the cost and improve the efficiency of making the fuels.

In the Purdue study, the researchers measured the rate parameters for pinewood char gasification with CO2, using large particles in relation to practical gasifiers.

The char was prepared by inert heating of a large quantity of low-ash pinewood sawdust in an electrical furnace to a temperature of 1,100 degrees Kelvin. The low-ash pinewood char was selected to minimize the catalytic effects of ash on mass-loss rates.

The researchers said char gasification for CO2 recycling was used because it has been studied less than char gasification in other environments and has the potential to reduce greenhouse gas emissions by recycling CO2 from stationary power plant exhaust streams.

They relied on independent measurements from gravimetric analyses and product gas composition analyses to determine char mass-loss rates and conducted detailed uncertainty analyses of both methods and reported uncertainties in kinetic rate parameters. They also investigated the char structure development with reaction progress and its implication on mass-loss rates.

“This study, specifically on the widely available pinewood, moves us a step closer toward mass producing this as a synthetic fuel for uses by the U.S. air transportation system, thereby reducing our reliance on petroleum oil,” Gore said.

Purdue researchers also are using the facility at Zucrow Labs to learn how coal and biomass “gasify” under high pressure in order to improve the efficiency of the gasification process. Students are working on doctoral theses on the system’s mechanical design, optical diagnostics and approaches for integrating aerospace-related technologies.

In addition, they hope to determine how to generate less carbon dioxide than conventional synthetic-fuel processing methods while increasing the yield of liquid fuel by adding hydrogen into the coal-and-biomass-processing reactor, a technique pioneered by Rakesh Agrawal, Purdue’s Winthrop E. Stone Distinguished Professor of Chemical Engineering.

Findings published in 2009 showed that carbon dioxide might be reduced by 40 percent using the technique.

The research is part of a larger effort to develop a system for generating large quantities of synthetic fuel from agricultural wastes, other biomass or coal that would be turned into a gas and then converted into a liquid fuel.