Spray-on LECs: dinner in the dark or a light-emitting fork?

A spray-sintering technique enables the fabrication of light-emitting electrochemical devices on complex substrates. 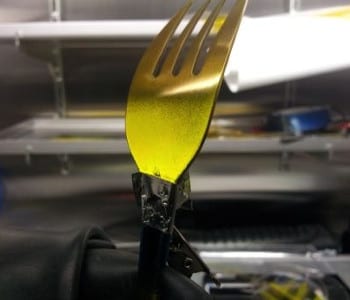 Organic light-emitting devices (OLEDs) have become omnipresent as displays in smartphones and tablets; however, producing them on a large scale still involves time-consuming and cost-intensive process steps under vacuum.

An alternative emissive device is the light-emitting electrochemical cell (LEC) consisting of a luminescent material (e.g., light-emitting conjugated polymer) in combination with an inorganic salt sandwiched between two electrodes. The electrochemical operation mechanism of LECs renders them insensitive to the work function of the electrodes and consequently enables the use of air-stable electrode materials. In stark contrast to OLEDs, LECs therefore have proven to be suitable candidates for a continuous ambient fabrication process.

With this in mind, Ludvig Edman and co-workers have developed a ‟spray-sintering” deposition technique that could make the vision of large-area and uniformly-emitting devices produced with a straightforward and cost-efficient fabrication technique. In the spray-sintering technique, the ink solution is atomized and sprayed onto the surface by means of an airbrush, forming mono- or multilayer films depending on the number of sweeps. These films possess a flat-particle-network morphology composed of deposited droplets that sinter together during drying rather than forming a wet film. Therefore, one major advantage is the encapsulation of dust particles rather than their spreading over a large area as in the case of wet films – a hypothesis that is reinforced by the strong suppression of dust-induced bright and black spots in the spray-sintered devices.

The researcher team presents uniform light emission from large area LCE devices (140-140 mm2) produced under ambient conditions at a low drive voltage of 3–5 V. Moreover, they demonstrate that spray-sintering allows the formation of multicolored devices using the sequential deposition of different inks based on similar or identical solvents. In other solution-based deposition techniques this process is rather challenging when using similar solvents, since the topmost wet layer usually dissolves the already deposited layer. One particular highlight visualizing the versatility of the spray-sintering technique is definitely the conformal fabrication of LEC devices onto complex-shaped surfaces by means of a mobile airbrush. Ludvig Edman and co-workers introduce emissive function to metal surfaces exemplified by a light-emitting fork. In this case, the metal acts as both substrate support and charge-injecting electrode.

In future, this straightforward approach could be used in space-limited applications such as flight cabins, car interiors, or on any surface requiring additional light.