With the help of thin-film technologies, researchers have now been able to turn solar cells into colorful creations. 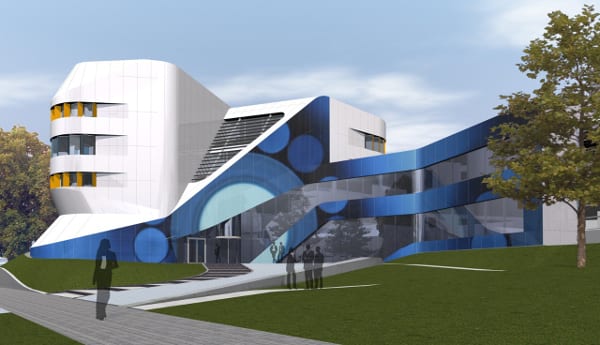 The photomontage shows how the Fraunhofer IAO building in Stuttgart could be fitted with an “efficient design” solar façade. Image copyright Fraunhofer IOF.

Until now, designers of buildings have no choice but to use black or bluish-gray colored solar panels. With the help of thin-film technologies, researchers have now been able to turn solar cells into colorful creations.

Covering a roof or a façade with standard solar cells to generate electricity will change a building’s original appearance – and not always for the better. At present only dark solar panels are widely available on the market. “Not enough work has been done so far on combining photovoltaics and design elements to really do the term ‘customized photovoltaics’ justice,” says Kevin Füchsel, project manager at the Fraunhofer Institute for Applied Optics and Precision Engineering IOF in Jena.

But things are changing. The IOF physicist has been focusing for the last four years on nanostructured solar cells suitable for mass production as part of a junior research group funded by Germany’s Federal Ministry for Education and Research (BMBF). Together with a Fraunhofer team and scientists from the Friedrich-Schiller University in Jena, the group of optics specialists is looking for cost-effective techniques and manufacturing processes to increase both the efficiency of solar panels and the design flexibility they give architects and designers.

Füchsel is currently working with his “efficient design” team on the fundamentals of how to make colored solar cells from paper-thin silicon wafers. These will be particularly suited to designs for decorative façades and domestic roofs. The silicon semiconductor material, just a few micrometers thick, absorbs light and turns it into electricity. To enable lots of light to reach the silicon substrate, the semiconductor layer is given an optically neutral protective barrier (insulator), onto which a hundred-nanometer-thick oxide layer is applied. This transparent conductive oxide (TCO) conducts electricity, and is there primarily to guide as many light particles as possible to the semiconductor layer below. “TCO has a lower refractive index than silicon, so it works as an anti-reflective coating,” Füchsel says.

The simple construction of this SIS (semiconductor-insulator-semiconductor) solar cell, with its transparent outer layer, has a further advantage: Not only does it capture more light, it means solar panels can be made in different colors and shapes. “The color comes from changing the physical thickness of the transparent conductive oxide layer, or modifying its refractive index,” Füchsel says. The Jena-based researchers have thus managed to combine wafer-based silicon with processes borrowed from thin-film photovoltaics. They are also pioneering the use of innovative coating materials. Indium tin oxide is the most common material used today, but it is expensive. The IOF laboratory is working on how to use cheaper zinc oxide with added aluminum. New opportunities in façade design are being opened up not just by SIS solar cells, however, but also by dye solar modules and flexible organic solar cells.

But how does color affect the efficiency of these new SIS modules? “Giving solar cells color doesn’t really affect their efficiency. The additional transparent TCO layer has barely any impact on the current yield,” Füchsel says. Simulations showed that SIS cells could be up to 20 percent efficient. In practice, the efficiency depends on the design of the solar panels and the direction the building faces. But not every color allows you to generate the same amount of electricity. There are restrictions for example with certain blends of red, blue and green.

The possibility of multicolored cells

To connect several solar cells to create a single module the IOF scientist will use laser-based optical welding processes. They enable accurate work at a micrometer scale and do not damage the surrounding material. Researchers are also developing an inkjet printing process to contact the conductive TCO later on the silicon wafer. This will make manufacturing faster and allow additional degrees of flexibility in design. SIS solar cells could even be used to make large billboards that produce their own electricity. Patents already cover the production of colored cells, as well as the ability to integrate design elements into solar panels and whole modules. “This opens up numerous possibilities to use a building to communicate information, displaying the name of a company or even artistic pictures,” Füchsel says.