A special issue on phase-change materials dedicated to the "Edison of our age". 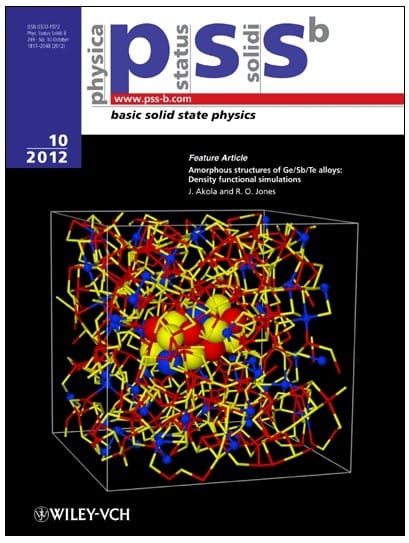 [Editorial note 19/10/12: We are deeply saddened by the news that Stan Ovshinsky has passed away. He did not live to hold the printed edition of the special issue in his hands, but he could see the on-line version, and guest editor Alexander Kolobov tells us that Stan Ovshinsky was very happy to acknowledge how many friends and colleagues wrote papers for this issue. Read his obituary here.]

On November 24th of this year Mr. Stanford R. Ovshinsky, the “Edison of our age” (according to The Economist), is to celebrate his 90th birthday. The October special issue of physica status solidi (b) on the science and applications of phase-change materials was guest-edited by Alexander V. Kolobov of AIST, Tsukuba, in honor of this outstanding scientist and inventor.

In his dedication, Hellmut Fritzsche, who knows Ovshinsky since 1963, outlines that many modern fields have their foundation in his inexhaustible creativity.  Based on self-teaching and driven by humanistic ideals, Ovshinsky showed astounding foresight with his pioneering research, often meant to solve scientific problems for society’s benefit: he envisioned displays ‘‘as thin as pictures hanging on the wall’’ and believed that depositing solar cells on thin substrates will be as easy as “printing newspapers” in the future.

Despite his success, Ovshinsky is a “generous person and enjoys giving happiness to people surrounding him”, testifies Eugenia Mytilineou, a former visiting scientist in his group. Konstantin Tsendin summarizes the research on the important switching and memory effects in chalcogenides fused at the Ioffe Institute mainly after Ovshinsky has established the field of amorphous semiconductors. In addition, Ovshinsky also lends his name to an award for “Excellence in amorphous chalcogenides”: Mihai Popescu reports on the history of the “Stanford R. Ovshinsky Prize” that has been awarded to a total of 14 scientists since it was established in 2001.

The feature articles highlight particularly interesting aspects: Noboru Yamada (Panasonic Corp.  and AIST, Japan) discusses different criteria that make for a good phase-change material; he points to the importance of being able to fine tune the properties of GeSbTe alloys for industrial applications such as Blu-ray discs. According to the contribution of Matthias Wuttig (RWTH Aachen), the optical contrast of a phase-change material is linked to resonance bonding and the corresponding electron delocalization. This knowledge can be used to predict potential new candidates for phase-change materials. Robert Jones (FZ Jülich) discusses limits and opportunities of parameter-free molecular dynamics simulations of the crystallization process. In addition, contributed articles cover fundamental questions ranging from p-type doping to pointing out the connection to topologically insulating phases, but topics related to growth and device properties are also touched on.

Aside from phase-change materials, today we look at thin film electronics in flexible solar cells, nickel-metal hydride batteries in hybrid and electric cars, and hydrogen storage alloys as just a few examples for the breadth of Ovshinsky’s innovations. His inventions lead to more than 400 patents total. 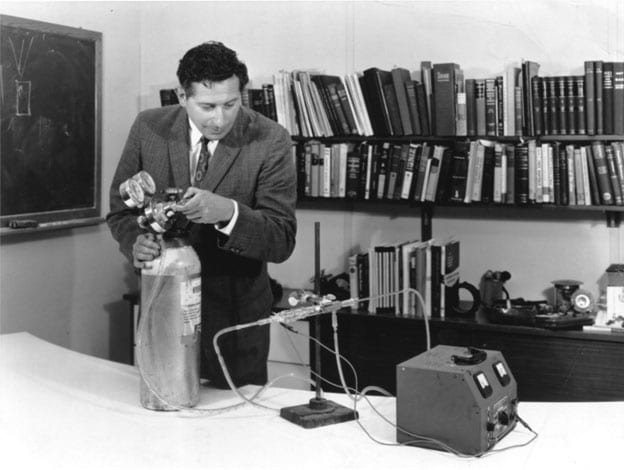 The young Ovshinsky in his laboratory apparently exposing his fuel cell to hydrogen.