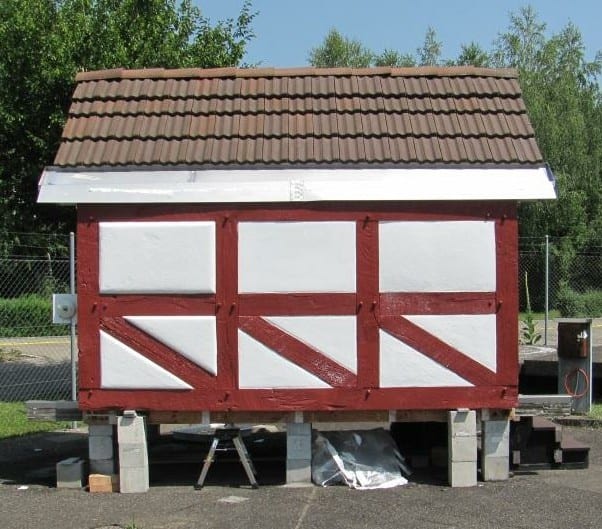 Old buildings are beautiful – and hard to insulate. Empa and the Swiss render manufacturer Fixit AG together developed a new Aerogel-based plaster that provides twice the insulation of currently used insulating renders. The product should come onto the market next year.

There are one and a half million old buildings in Switzerland. We have to live with these buildings – indeed we want to live with them. Yet at the same time the country’s energy consumption is increasing. According to the Federal Office of Energy, 4.5 million tonnes of light fuel oil and 3 million cubic metres of natural gas are imported every year, 43 percent of which goes up the chimney for heating. Anyone who wishes to cut down on fossil fuels must therefore insulate their home. But how do I insulate my historical building? Heritage protection would be none too pleased if the historical façade was covered with modern insulating panels.

Rendering is the most suitable way of maintaining the look of an old house. Cutting insulating panels to size (and shape) is also a cumbersome business when lining winding staircases, round arches and supporting walls. “An inner lining of insulating render is considerably quicker to apply”, says Empa building physicist Thomas Stahl. “The render also lies directly on the brickwork and does not leave gaps where moisture could condense.”

Stahl and his colleague Severin Hartmeier from Fixit’s central laboratory made it their task to take the insulating properties of render to a new level, and to develop a render that provides as much insulation as a polystyrene board. Years of research have now finally paid off: The product has come through laboratory testing, and initial trials on buildings started in July 2012. If the new insulating render holds up to its promise, the material could come onto the market in the course of next year.

But what does this marvellous render from the Empa labs consist of? Stahl and his colleagues decided on the best insulating material that can be produced industrially: aerogel. The material, which is known as “frozen smoke” because of its appearance, consists of around 5 percent silica – the rest is air. Aerogel was used back in the 1960s for insulating space suits, and has 15 entries in the Guinness Book of Records, including “best insulator” and “lightest solid”.

Aerogel is already being used in the building industry, as cavity-injected wall insulation or in the form of insulating boards made from fibrous fabrics. So where is the problem? Why hasn’t anybody already mixed aerogel with render? Thomas Stahl doesn’t waste his breath on a lengthy explanation. He takes a transparent plastic box off the shelf and opens the lid: “Put your hand in and rub it a little”. The aerogel globules really are extremely light, almost weightless, and can be held between thumb and forefinger. But as soon as you rub your fingers, it crumbles. After two or three rubs, a fine powder is all that remains of the wonder material. “And that was precisely our problem”, says Stahl, “if we mix the powder with water and apply the render by hand, the results are good. But imagine if the render was pumped through the hose of a professional rendering machine at a pressure of 7 to 8 bar. There wouldn’t be much left of our aerogel.”

In order to make the render “machine-compatible”, a tremendous amount of knowledge about the contents of dry render mixtures and their interactions with aerogel was required. And a series of tests – from palm- sized laboratory samples to weathering tests lasting for months. Eventually the researchers at Empa and Fixit found a solution, which they now want to have patented. The samples of the aerogel render exhibited a heat conductivity of less than 30 mW/(mK) – twice as much insulation as the insulating render that is currently commercially available (see bar diagram on left). If the innovation asserts itself on the market, Swiss house owners will soon see a considerable reduction in fuel consumption.