Southern Mesopotamia: Water and the Rise of Urbanism 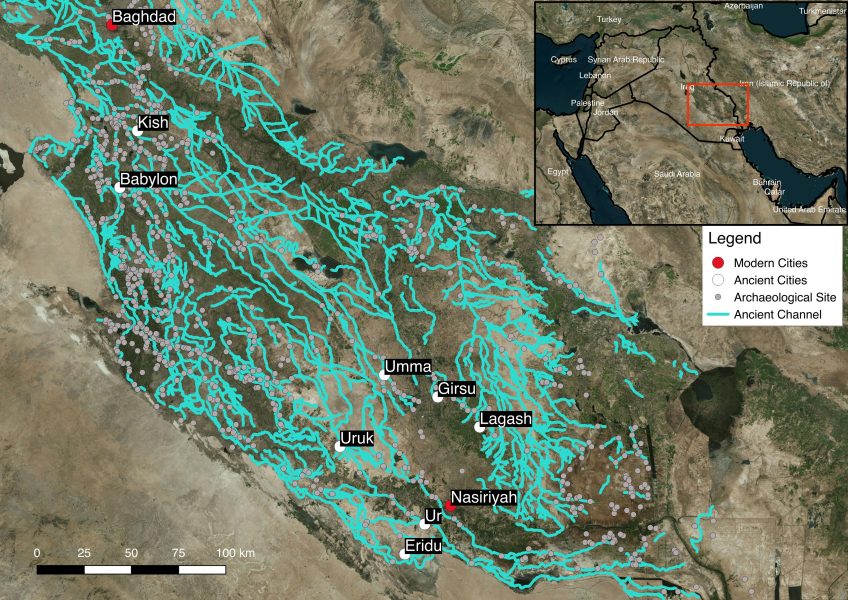 In this WIREs Water review, new developments in understanding the rise of complex societies in southern Mesopotamia and it’s relationship to water are explored.

The region of southern Mesopotamia, modern southern Iraq, was home to the world’s oldest known cities and complex societies. These cities and towns became possible because they developed in close harmony with the natural waterworks of the region, with these societies also developing irrigation works and other water features. Settlements were built along levees and so-called ‘turtle backs’ made up of natural accumulation and human-made debris (see feature image, a map of southern Iraq showing ancient sites and channels along with major ancient cities).

Water was critical to the rise of cities and the unique evolution of societies. Societies in southern Mesopotamia evolved along with their environmental surroundings, creating irrigated fields  built from natural crevasse splays is evident in the landscape. By-products of these developments were increasingly complex social practices, including religious institutions, the rise of governments, written language, laws, and other behaviors that we associate with our own societies.

Recent work in southern Iraq demonstrates that the region was likely occupied much earlier than previously thought and the steady progression towards complex societies started even earlier. New climate data and other work will mean the picture of how the environment shaped the development of these urban-based societies in southern Mesopotamia will evolve in the coming years. New fieldwork, including surveys and excavations, will also shape a new understanding of how urbanism arose in this complex landscape.

Tourism, water, and gender
Drinking water disinfected in minutes by natural and abundant catalyst
Turning waste heat from solar panels into a water distillation process
Freshwater in the seabed: An opportunity for creative solutions