A new asteroid that orbits the Sun in just 113 days was recently discovered in twilight images. 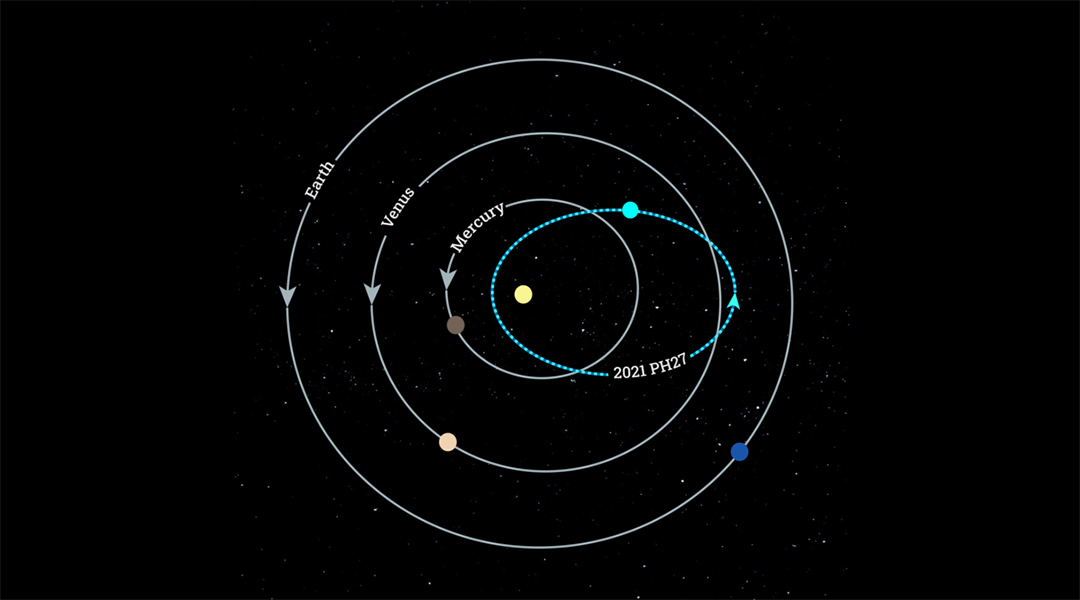 The Sun has a new neighbor that has been hiding in plain twilight. An asteroid that orbits the Sun in just 113 days — the shortest known orbital period for an asteroid and second shortest for any object in our Solar System after Mercury — was discovered by astronomers using evening twilight images.

The newfound asteroid, called 2021 PH27, is about 1 kilometer in size and is on an unstable orbit that crosses that of Mercury and Venus. This means that within a few million years it will likely be destroyed in a collision with one of these planets or the Sun, or it will be ejected from its current position.

Studying objects like this can help scientists understand where asteroids originated and the forces that shaped our Solar System’s architecture. “Most likely 2021 PH27 was dislodged from the Main Asteroid Belt between Jupiter and Mars and the gravity of the inner planets shaped its orbit into its current configuration,” said discoverer Scott Sheppard. “Although, based on its large angle of inclination of 32 degrees, it is possible that 2021 PH27 is an extinct comet from the outer Solar System that ventured too close to one of the planets as the path of its voyage brought it into proximity with the inner Solar System.”

Because 2021 PH27 is so close to the Sun’s massive gravitational field, it experiences the largest General Relativistic effects of any known Solar System object. This is seen in a slight angular deviation in its elliptical orbit over time, a movement called precession, which occurs at about one arcminute per century. Observation of Mercury’s precession puzzled scientists until Einstein’s Theory of General Relativity explained its orbital adjustments over time. 2021 PH27’s precession is even faster than Mercury’s. “2021 PH27 gets so close to the Sun that its surface temperature gets to around 900 degrees Fahrenheit at closest approach, hot enough to melt lead,” Sheppard said.

Future observations of this object will shed more light on its origins. Comparing 2021 PH27 to objects that orbit beyond Earth will improve researchers’ knowledge of its composition and the materials that enable its survival under these extreme conditions. An object like 2021 PH27 experiences tremendous thermal and internal stresses due to its proximity to the Sun.

A census of asteroids near and inside of Earth’s orbit is crucial for identifying those that could potentially impact our planet, but are difficult to spot because they approach Earth during daylight. These types of asteroids are not easily detected by most surveys, which usually observe at night. The asteroid will soon pass behind the Sun and be unobservable from Earth until early next year, at which time observers will be able to refine its orbit to the precision needed to give it an official name.

The only efficient method for spotting asteroids that move around the Sun in orbits closer than Earth’s own is to take images as the Sun sets or rises, which Dell’Antonio and Fu did with the Dark Energy Camera on the National Science Foundation’s Blanco 4-meter telescope in Chile. Their main research is part of the Local Volume Complete Cluster Survey, which is observing most of the massive galaxy clusters in the nearby universe with increased detail. In collaboration with Sheppard, Dell’Antonio and Fu switched from focusing on some of the most distant objects in the universe to some of the nearest, using the first few minutes of evening twilight on August 13 to take images in which Sheppard was able to find 2021 PH27 a few hours later.

“Because the object was already in the Sun’s glare and moving more toward it, it was imperative that we determine the object’s orbit before it was lost behind our central star,” explained Dave Tholen of the University of Hawaii, who measured the fast-moving asteroid’s position on the sky and predicted where it would be the night after the initial discovery. “I surmised that for an asteroid this size to remain hidden for so long, it must have an orbit that keeps it so near to the Sun that it is difficult to detect from Earth’s position.”

Additional images were obtained the following night using the Magellan telescopes at Carnegie’s Las Campanas Observatory in Chile as well as again with NSF’s 4-meter Blanco telescope. A third night of follow-up observations were needed to determine the new asteroid’s orbit before it was lost, but cloudy weather in Chile elicited a trek around the world to South Africa thanks to the activation of the Las Cumbres Observatory’s extensive network of global 1-meter telescopes.

“Although telescope time is very precious, the international nature and love of the unknown makes astronomers very willing to override their own science and observations to follow-up new interesting discoveries like this,” said Sheppard. “We are so grateful for all of our collaborators who enabled us to act quickly on this discovery.”

Phosphine on Venus could actually be caused by volcanic activity
Growing interest in Moon resources could cause tension
Can bacteria survive in space?
Seeking life on Mars: What you need to know about the Perseverance mission