Solar Refinery: Can we have our carbon cake and eat it too?

Professor Ozin explores the feasability of a solar refinery for making fuels and chemicals from CO2, H2O and sunlight. 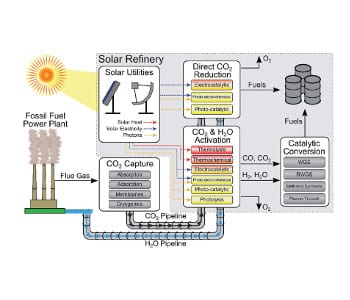 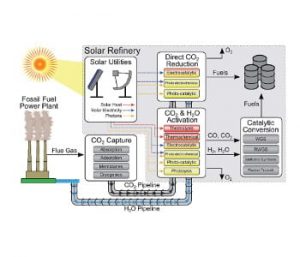 Scheme Futuristic ‘solar refinery’ for making fuels and chemicals from CO2, H2O and sunlight, Reproduced from A general framework for the assessment of solar fuel technologies, Energy & Environmental Science, DOI: 10.1039/C4EE01958J with permission of The Royal Society of Chemistry.

There is a global effort underway to discover advanced engineering materials and processes to realize the ‘solar refinery’ of the future.

The purpose of the envisioned solar refinery is to enable an energy transition from today’s unsustainable ‘fossil fuel economy’ with its associated risks of climate change caused by CO2 emissions, to a new and sustainable ‘carbon dioxide economy’ that instead uses the CO2 as a C1 feedstock, together with H2O and sunlight, for making solar fuels.

There is actually nothing too surprising contained within each module of the solar refinery: (i) A solar utility harvests sunlight in the form of heat, light or electricity; (ii) A CO2 facility uses absorption, adsorption, membrane or cryogenic techniques for capturing, purifying and releasing CO2 on demand; and (iii) The CO2 is piped with H2O and either directly transformed to fuels using electrochemical, photoelectrochemical or photocatalytic methods or indirectly converted to CO and H2 by thermochemical, electrochemical, photoelectrochemical or photocatalytic means. The CO and H2 formed by these processes are subsequently made into fuels by well known industrial heterogeneous catalytic processes based on Fischer-Tropsch, methanol synthesis, water gas shift or reverse water gas shift chemistry.

However what has been sorely missing in the open literature, to assist the teams of materials chemists, scientists and engineers around the world who are eager to contribute to the development of this solar refinery, is a life-cycle-assessment, a holistic techno-economic analysis of the energy and economic costs of the alternative technologies contained within each module, including that required to build the solar collectors and chemical facilities. These teams of researchers also need to understand, how the ultimate price tag of fuels produced in the solar driven refinery compare with those generated in a fossil fuels powered refinery. With this information, they can improve the energy efficiency and economic burden of the materials and processes required for making fuels from the sun that can compete in the marketplace with those made from fossil fuels.

In a chemical engineering tour-de-force, Christos Maravelias and colleagues from the University of Wisconsin have recently modeled and analyzed the energy and economic cost of every step and each alternative technology contained in a solar refinery (Energy and Environmental Science, 2014, DOI: 10.1039/c4ee01958j). Their analysis encompasses all scales and all parameters that underpin the energy and economic costs of running a solar refinery. The result is a general framework that will allow scientists and engineers to evaluate how various improvements in materials’ manufacturing and processing technologies that enable carbon dioxide capture and conversion to fuels using solar, thermal and electrical energy inputs would accelerate the development, influence the cost and impact the vision of the solar refinery. It will also enable evaluation of which alternative technologies are the most economically feasible and should be targeted or highlight those that even if developed would still be hopelessly uneconomic and can therefore be ruled out immediately.

The view that emerges from this techno-economic evaluation of building and operating a solar refinery is one of guarded optimism. On the subject of energy efficiency, it is clear that solar powered CO2 reduction is currently lagging far behind that of solar driven H2O splitting and more research is needed to improve the activity of photocatalysts and the efficacy of photoreactors. In the indirect process of transforming CO2/H2O to fuels, it is apparent that if the currently achievable solar H2O-to-H2 conversion (>10%) can be matched by solar CO2/H2-to-fuel conversion efficiencies, through creative catalyst design and reactor engineering, this would represent a promising step towards an energetically viable solar refinery. For the process that can directly transform CO2/H2O to fuels, improvements in conversion rates and product selectivity are key requirements for achieving energy efficiency in the solar refinery.

Economic efficiency is also a key to the success of the solar refinery of the future. For currently achievable CO2 reduction rates and efficiencies, the minimum selling price of methanol, a representative fuel, was evaluated by the techno-economic analysis and turned out to be more than three times greater than the industrial selling price analysis, even though the cost of the CO2 reduction step, which is estimated to be quite costly, was not included in the estimates. Improvement in the activity of CO2 reduction photocatalysts by several orders of magnitude would have a significant impact on the energy and economic costs of operating a solar refinery. It is anticipated that these developments are in the pipeline!

The paper by Christos Maravelias and his colleagues makes clear that the cost and energy efficiency of carbon capture and storage is an area where big improvements need to be made if the solar refinery is to be a success. Also, that absorption of CO2 from the air was not going to be viable for some time and that carbon capture and storage from power stations and industrial plants would be concentrated on initially. In this context, there are encouraging developments underway at an emerging Swiss company Climeworks AG (www.Climeworks.com) with commercially available equipment that enables an efficient two-step process involving (i) CO2 capture and purification using specialized sorbents followed by (ii) CO2 release using solar power. This positive development, together with advances in CO2 photo-reduction rates and efficiencies, and product selectivity’s, could enable ‘net fuel energy generation’ in a solar refinery, a prerequisite for successful commercialization.

One other point that is worth making is the question of the availability of water, which has not so far been referred to in the above discussion, although the paper by Christos Maravelias and his colleagues touches on it and then decides not to discuss it further, as the transportation cost is a very small fraction of the overall process cost. However, in some parts of the world the availability of water could be a major factor. The whole question of water and solar availability could be the subject of another opinion editorial.

Returning to the question in the title of this article: can we have our carbon cake and eat it too? One very important result of the dream of the solar refinery is that it will enable us to continue to have our carbon cake. We have become used to our carbon cake or carbon world and the movement to a sustainable ‘carbon dioxide economy’ will be a change which the world should be able to take in its stride. In the long term who knows what kind of cake will replace the carbon cake!

Multidisciplinary teams of materials chemists, materials scientists, and materials engineers across the globe believe in the dream of the solar refinery and a sustainable CO2 based economy. It is abundantly clear from the analysis by Christos Maravelias and his colleagues that developing models to evaluate the energy efficiency and economic feasibility of the solar refinery, and at the same time identifying hurdles which have to be surmounted in order to realize the competitive processing of solar fuels, will continue to play a crucial role in the development of the required technologies. These analyses will serve to identify key aspects of materials properties and process design that are required to facilitate the transformation of ongoing solar fuels research and development into the solar refinery of the future.