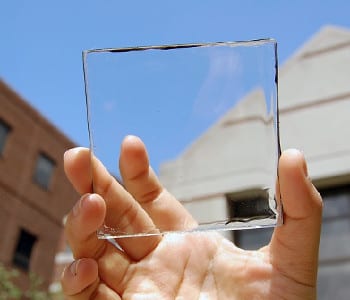 Last year, a team of researchers at Michigan State University demonstrated a new type of solar concentrator that when placed over a window creates solar energy while allowing people to actually see through the window. They called it a transparent luminescent solar concentrator.

Co-Founder and CEO, Miles Barr: “We look forward to demonstrating ClearView Power’s potential as an efficient energy source for a range of electronic devices that include wearables, tablets, and digital signage.”

Implemented as a fully transparent film that covers a device’s display area, ClearView Power technology transmits light visible to the human eye, while selectively capturing and converting ultraviolet and near-infrared light into electricity to power the device and extend its battery life.

Numerous attempts to develop see-through solar cells have resulted in only modest transparencies. In contrast, ClearView Power is the first truly transparent solar technology that can overlay the surface of an electronic display without affecting device performance or display clarity. We really can be excited about the innovations this technology will bring.