Soft magnetic steel is the core of a new generation of solar cars. 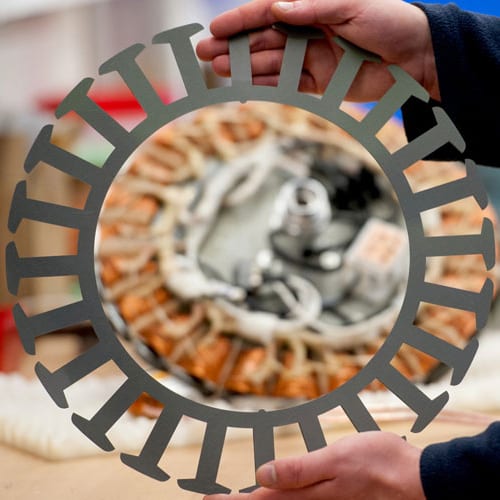 In October 2013 the “PowerCore SunCruiser” will be taking part in the World Solar Challenge in Australia. The solar-powered, high-tech car is the first of a new generation featuring materials from ThyssenKrupp Electrical Steel. Together with experts from the Bochum University of Applied Sciences the specialists spent months working on the motor of the new vehicle: the PowerCore SunCruiser. The four-wheel, three-seater vehicle is a functional car. While the first solar-powered cars were extremely low profile, with large surfaces for the solar panels, only three wheels and generally only enough room for a driver, the latest generation is more like a normal car, even featuring a trunk. 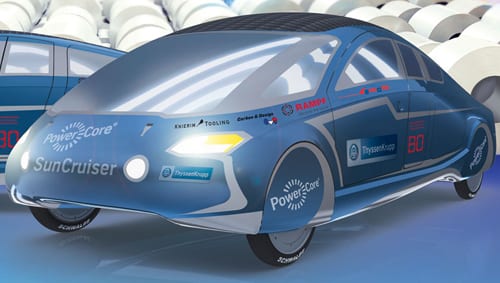 For the first time, the motor is made with material from ThyssenKrupp Electrical Steel – a special soft magnetic steel used mainly in motors for efficient power transmission. The Germany based company is a leading manufacturer of this material for high-efficiency electric motors. Hub motors are installed in each of the solar car’s front wheels and transmit power directly to the tires, eliminating large transmission losses. “The use of electrical steel here is a revolutionary step,” says Stefan Spychalski, who has been working on the solar car project at Bochum University of Applied Sciences for over ten years.

“Previously we used air core motors, but to achieve higher power we needed to use a core material.” They decided in favor of PowerCore non-oriented electrical steel, which offers numerous advantages: The high-quality, soft magnetic material has low electrical power requirements and provides a controlled magnetic flux for high power density and maximum motor torque.

“We were excited immediately by the project and the dedication of the students,” says Dr. Andreas Jansen, head of applications technology at ThyssenKrupp Electrical Steel, which has plants in Gelsenkirchen, Bochum and elsewhere. “We knew right away that we wanted to be involved in developing this motor.” The PowerCore SunCruiser thus benefits from two areas of expertise: The roughly 40-strong team of students carries out motor simulations on an in-house test rig based on know-how gathered from the last five solar car generations, while the ThyssenKrupp subsidiary provides a tailored ingredient: “We customized the thickness of our electrical steel to 0.30 millimeters, and we also made changes to the alloy composition and the annealing process,” says Jansen. The result is an electrical steel that helps make very efficient use of the sun’s energy with minimal core losses. 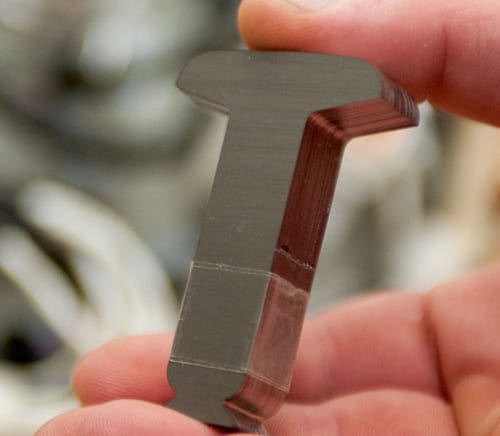 The natural energy flows directly from the non-reflecting solar cells on the roof to the motor or in strong sunshine to the battery, where it is stored for use in dull weather. “The drive system delivers the required mechanical and electrical properties. Now we have to do the fine tuning,” says Benjamin Geiger, one of the students on the team who already took part in the round-the-world tour by the predecessor model SolarWorld GT in 2012 – 30,000 kilometers in 14 months in a car that can circumnavigate the world on the energy equivalent of 60 liters of diesel.

The partners have a vision for their joint project: “We want the project to contribute to the targeted development of electrical steel for use in vehicles, tailored to location, motor design and driving cycles,” explains Jansen. “We can use the results of our research on the solar car to position ourselves more strongly in the area of electric mobility.” The engineers are putting their inside knowledge to direct use at the company’s “E-Mobility Center Drives”. Spychalski knows from experience: “Building cars powered only by the sun’s rays inspires us to be inventive. So when it comes to areas such as weight reduction and energy efficiency, we’re taking a big step towards the car of the future.”

A plant to help the planet: A strong, tough, and scalable material from fast-growing bamboo
The world's smallest motor
Dynamic 3D printing process features a light-driven twist
A new material for thermal camouflage