Soft Wheels and Rotary Motors Based on Peristaltic Motion 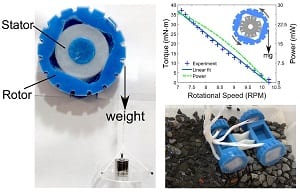 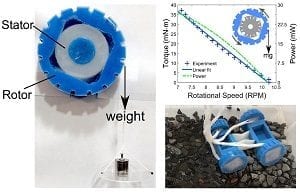 Wheels on axles – distinct from rolling mechanisms employed by animals (e.g., three-banded armadillos, pangolins, wheel spiders, and pebble toads) – do not exist in nature at the macro scale. Competitively advantageous modes for soft creatures on land tend to resemble walking, crawling, and jumping. Wheels and rotary motors have also been notably absent from recent advances in elastomeric actuators, which have been incapable of delivering torque through pure rotation. In contrast, peristalsis is common in nature, and the circular muscles of the human esophagus use this motion to push a bolus of food toward the stomach. A variety of limbless crawlers, such as earthworms, snails and snakes, use peristaltic mechanics and have inspired worm-like robots.

The Mazzeo Research Group, a team focusing on soft actuation, disposable electronics, and centrifugal processing at Rutgers University, has demonstrated the design and fabrication of soft motors by combining pneumatically-driven elastomeric structures with peristaltic motion. These rotary actuators have either an internal rotor for winch/joint-like applications or an external rotor that can serve as a wheel. Fabrication of these actuators employs the use of 3D-printed molds and millimeter-scale soft lithography of squishy and soft elastomers. Characterization of the relationships between speed, torque, and power for these actuators provides a baseline for potential uses in locomotion and transportation of payloads. An elastomeric four-wheeled vehicle enabled by these actuators can travel at a speed of 3.7 cm/s, negotiate irregular terrain, and endure mechanical impact from a drop eight times its height.

This class of actuators extends the potential functionality of soft robotic systems by providing rotational torque without requiring bending or twisting. Future wheeled robots with elastomeric components might find uses in search and rescue missions in extreme environments or over varied terrains, such as an irregular tunnel that requires a compliant body with large deformation, or a rugged lakebed. With the low sensitivity of elastomers to magnetic fields, wheeled robots or rotary joints made of elastomers might facilitate the manipulation of objects during magnetic resonance imaging (MRI). Lacking sharp or metal components, soft rotary actuators may also serve as safe motors and be compatible with future human-friendly robots or vehicles.

A plant to help the planet: A strong, tough, and scalable material from fast-growing bamboo
Facial mask used to improve solar cells quality
A new diode could be a game changer for server farms and aircraft
Indoor 5G gets a much-needed signal boost