Professor Guangsheng Guo, the President of BJUT, presents appointment in ceremony in Beijing. 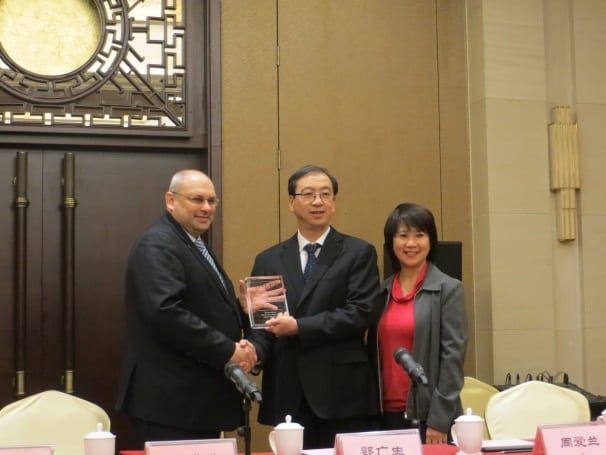 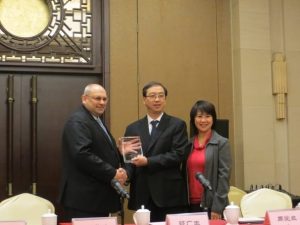 On November 18th, 2013, an award ceremony was held at Beijing University of Technology to confer a guest professorship on José Oliveira, Editor in Chief of Small and Advanced Healthcare Materials. The ceremony was combined with a Wiley materials science journals symposium.. Professor Guangsheng Guo, the President of Beijing University of Technology (BJUT) presented and awarded the guest professor appointment certificate to Dr. José Oliveira in person.

Ms. Stella Chou, Managing Director of Wiley China, Prof. José Oliveira, Dr. Duoduo Liang, and Dr Guangcheng Xu, gave presentations at the meeting. They respectively introduced the development of Wiley, Wiley’s materials science portfolio and Chinese research publications, the peer review process of the Advanced Materials family of journals, and online methods for the further promotion of papers and research results. Prof. Yijian Jiang, the Vice-President of Beijing University of Technology and Professor Jinshu Wang, the Dean of the College of Materials Science and Engineering also gave presentations to introduce the status of materials science development in Beijing University of Technology.

“BJUT has always been investing in research to publish high-quality papers,” said Prof. Guangsheng Guo, the President of BJUT..” Wiley is an international publisher with a good reputation. With Dr. Oliveira’s professorship at BJUT, we are looking forward to more cooperation between Wiley and BJUT in terms of research publication and enhancing global impact.”