Skyscrapers Sweat it Out: Sweating Surfaces for Building Materials 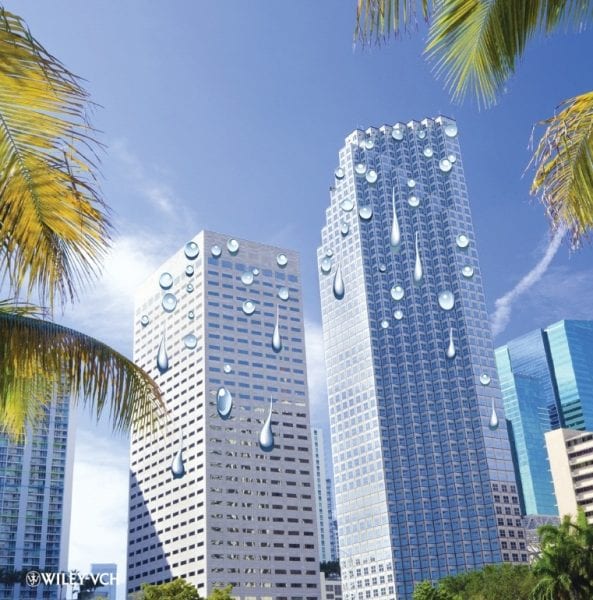 Our buildings waste energy in an endless cycle of heating and cooling. We mammals, however, have our own (low-cost) method of temperature regulationy sweating.  The front cover of this issue of Advanced Materials (Issue 39, Volume 24) nicely illustrates a great new idea for smart materials in the real world: using sweating polymers to passively cool buildings. 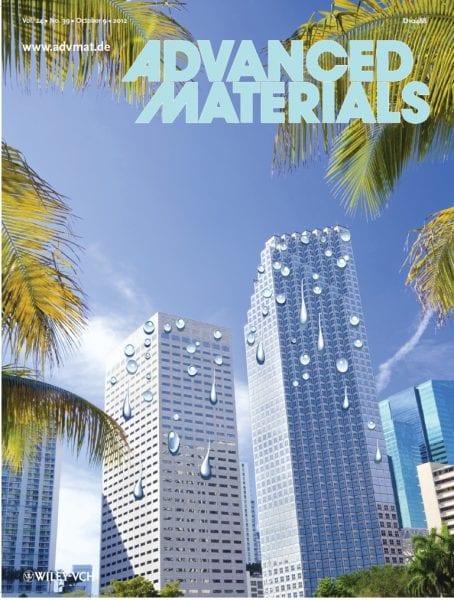 Prof. W. J. Stark and his co-workers wondered if a thermoresponsive material, PNIPAM, poly-N-isopropylacrylamide, could be used to keep a model house cool. PNIPAM has a lower critical solution temperature of 32 °C. Below that temperature the polymer is well-swollen and hydrophilic; above that temperature the polymer collapses to a hydrophobic state, “sweating” out water in the process. In an initial experiment, the researchers took two identical model houses and replaced their roofs: one with a roof made from 3-mm-thick layers of partially crosslinked PNIPAM and the other with a roof made from a conventional hydrogel: poly-hydroxyethylmethacrylate (HEMA). The houses were then allowed to bask in solar irradiation equivalent to noon-time sun. As can be seen in the infrared images below, the ground in front of the houses heated up very quickly to 60 °C (red color) while the hydrogel surfaces on the roofs remained a cool blue. After twenty minutes, however, one can see the difference in performance between the two roofs: the pHEMA roof has now warmed up to a greenish color while the PNIPAM roof remains blue. After prolonged irradiation, the PNIPAM roof heats up to the same temperature as the pHEMA roof (35 °C).

In a set of quantitative experiments, the team showed that the PNIPAM layers remained cooler for longer due to fast evaporated cooling. The team showed that when conventional hydrogels are heated, they rapidly develop a dense top layer of desiccated polymer which hinders water diffusion. In contrast, irradiation and heating of a thermoresponsive polymer causes water release and a subsequent volume decrease, without formation of a dried-out top layer. The bulk hydrogel heats up uniformly and responds as a whole to the temperature change, allowing it to maintain a temperature around its LCST until most of the water has evaporated.

Of course, to keep on cooling the building, the polymer would need to have its water supply replenished. This could occur naturally through the afternoon rains in tropical parts. In other climates, the authors say, materials scientists could develop polymers that can absorb humidity at night to slowly reload the cooling layer without rainfall.

The authors calculate that such a sweating roof could reduce the electrical consumption of a family home by up to 60%. So maybe sweating skyscrapers are something we’ll see in the future. But you probably won’t want to sit next to one on a bus!