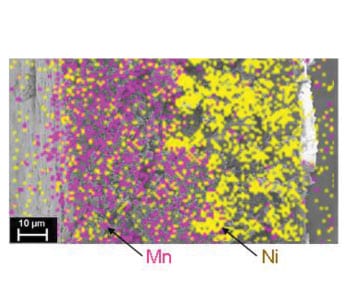 Swiss and Japanese researchers have developed an effective method to study the perpendicular inhomogeneities of lithium electrodes in real time, with convincing results that indicate electrode porosity is a prime factor. While there have been several studies on lateral inhomogeneities in Li electrodes, very few have been carried out in the direction perpendicular to the current collector.

The durability and safety of Li-ion batteries is affected by overuse and overcharge behaviour. This arises due to inhomogeneous reactions, which causes regions of concentrated current flow. Using four arrangements of a two-layer electrode in a “coffee bag” cell, the international research group has investigated the effects of different layer ordering and porosity on the electrode stability. The electrodes comprised two self-standing films of LiNi0.80Co0.15 Al0.05O 2 (NCA) and LiMn2O4 (LMO). Each of the four designs used had almost the same mass of active material, with the molar ratio of NCA to LMO varied between 0.93 and 0.97. Using the bilayer structures as working electrodes, in situ X-Ray diffraction measurements carried out at the Swiss Light Source were used to determine which of the two active materials was reacting. 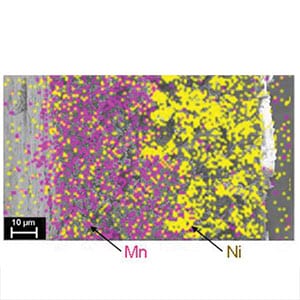 The electrodes with lower porosity (which corresponds to higher density) showed a higher activity at the separator side than at the current collector side, i.e., a “rush” of current towards the separator side. It is probable that this behaviour results from rate-limitation due to a relative lower ionic resistance at the separator side. The high porosity electrodes on the other hand, did not show any such rate-limiting behaviour and displayed less inhomogeneity. Given that tuning the porosity of the electrode will in turn affect the ionic and electronic conductivities, it is concluded that porosity is a prime factor where inhomogeneous reactions are concerned.

Full details of the electrode fabrication and in situ measurement process can be found in the published article. The study offers an important basis for electrode stability improvements, to prevent overcharge and overuse in Li-ion batteries. The experimental technique also paves the way for in situ investigations of inhomogeneous processes in a variety of applications, not just electrodes.