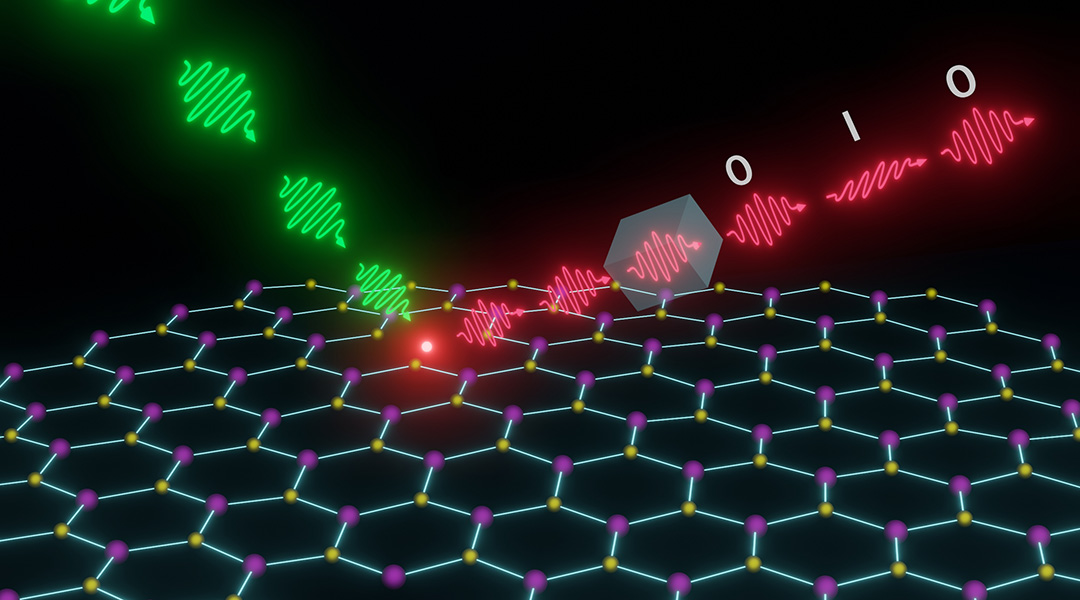 In recent years, quantum mechanics has become the basis for entire areas of computing and information technology. Among them is quantum key distribution (QKD), which establishes a secure communication channel between two parties where security is guaranteed by fundamental quantum principles.

The parties share a secret key known only to them which can be used to encrypt and decrypt messages transmitted over classic communication channels, such as broadcasting, television, or the internet. Typically, the key is generated by one party and then sent to the other, having been encoded in quantum states — referred to as qubits — as opposed to bits used in classical communication. Usually, qubits are created from photons, and different quantum states of qubits correspond to different directions of particle spin, which is the quantum mechanical analogue of classical rotation.

This way of key sharing is secure because users can detect the presence of any third parties (or eavesdroppers) trying to obtain information about the key. This stems from a fundamental principle of quantum physics that states that the measurement of a quantum system perturbs it, changing it. An eavesdropper trying to intercept the key must measure the states of the photons, which leads to certain anomalies in the signal that can be detected by the communicating parties.

For this type of encryption to work, a reliable source of single photons is needed to generate the keys — if the party transmitting the key accidentally creates two photons in the same state, the eavesdropper can intercept one without changing the state of the other, thus obtaining information about the key without it being revealed to the communicating parties.

It is this issue that has been addressed by a team of physicists led by Serkan Ateş at the Izmir Institute of Technology in Turkey, where a reliable method for producing single photons was developed.  The technique relies on the excitation of defects in hexagonal boron nitride, a solid that has a crystal lattice structure similar to that of graphene. The excitation of the defects is achieved by applying polarized laser radiation, which causes the material to emit photons in well-controlled quantum states.

“The fundamental ingredient of quantum key distribution is a bright single photon source,” explained Ateş in an e-mail. “There are several, well-studied single photon sources, such as quantum dots, single molecules, or atomic systems, each of which has their own advantage in terms of operating conditions. Defects are used as single photon sources for QKD due to their high efficiency and [ability to operate] at room temperature.”

In general terms, defects are localized disturbances in a material’s periodic crystal structure, which in the case of hexagonal boron nitride, is a honeycomb shape. This “disturbance” can be an atom that occupies a site in the crystal lattice where another atom would naturally occur (for example, a nitrogen atom replaces a boron atom), or the absence of an atom in the lattice, leaving behind an empty site.

“One of the most prominent advantages of defect centers in hexagonal boron nitride is their bright and stable single photon emission from cryogenic temperature up to 800 Kelvin,” said Çağlar Samaner, first author of the paper and a Ph.D. student in Ateş’ lab. “In addition, hexagonal boron nitride hosts several types of defects that operates over a wide spectral window from [ultraviolet] to [near-infrared].”

The material the researchers worked with was made up of many layers of hexagonal boron nitride but was still so thin that it could essentially be considered two-dimensional, giving it very important properties. Two-dimensional materials have proven very attractive in other areas, with high brightness and operation under ambient conditions.

“[Two-dimensional] materials, in general, are much easier to integrate into nano-photonic systems, as their reduced dimensionality provides a flexible yet strong mechanical features to work with wide range of applications,” added Ateş.

In their experiments, the scientists achieved the quantum bit error rate — the percentage of qubits that differed between the sent and received keys — of 9%, which is comparable with other, state-of-the-art single photon sources. They expect that this could be further improved by modification of the experimental setup.

The team believes that defects in hexagonal boron nitride have a great potential for practical implementation of high-speed and long distance, free space quantum key distribution.

“We expect that defects in hexagonal boron nitride will attract a great attention as efficient single photon sources in the space-based quantum key distribution systems in near future,” concluded Ateş.