SF6 Worries – The Most Potent and Persistent Greenhouse Gas

The most potent and persistent greenhouse gas is neither carbon dioxide nor methane, but sulfur hexafluoride, a colorless, odorless, non-polar, inert gas. 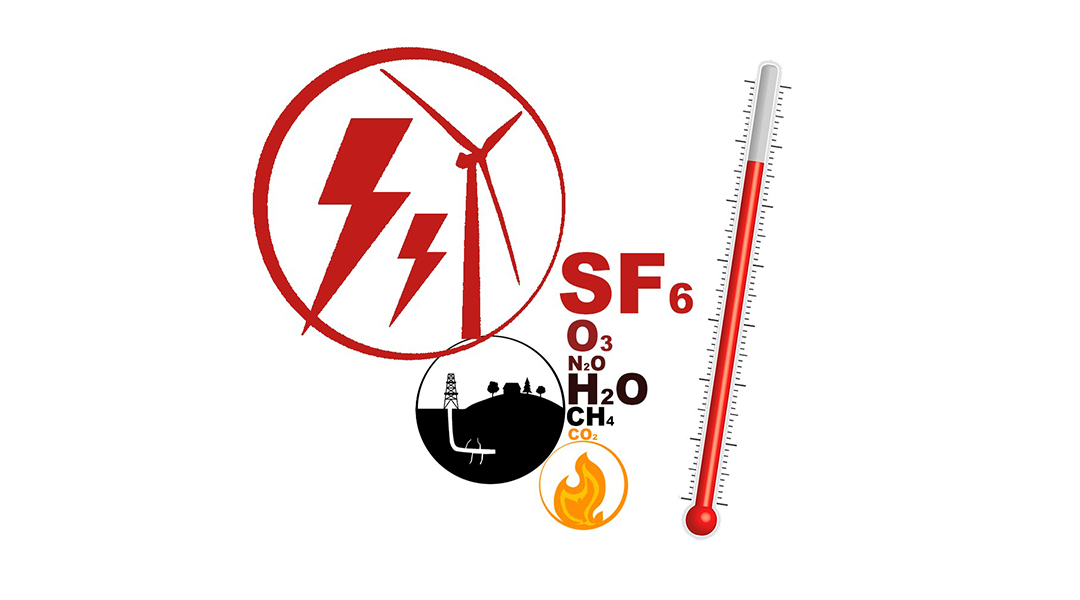 It is not well recognized that the most potent greenhouse gas is, surprisingly, neither carbon dioxide nor methane, but sulfur hexafluoride (SF6) a colorless, odorless, non-polar, inert gas.

Something else to worry about!

This gas, which enjoys wide-ranging large and small scale uses, is readily condensable to a liquid, can then be stored, transported, metered, and dispensed under its own vapor pressure.

The discovery of SF6 can be traced to the work of Henri Moissan and Paul Lebeau in 1901, who found that sulfur reacted with fluorine according to the reaction equation:

Under ambient conditions of temperature and pressure, SF6 exists as a gas; this property is traceable to the small size and low polarizability of the fluorine atoms covalently bound to sulfur, resulting in weak Van der Waals interactions between SF6 molecules.

The profound chemical robustness of SF6 arises from the steric congestion created by its six constituent fluorine atoms being bonded in a tight octahedral geometry about the central sulfur atom (see Figure 1), thereby protecting it from reaction with even molten sodium. One of the few exceptions is the massively exothermic reaction of SF6 with lithium:

The energy released in this reaction has been utilized to great advantage in torpedo and missile propulsion engines.

Besides weaponry, the unique properties of SF6 enable widespread applications that include dielectric insulation of electrical equipment, thermal window insulation, medical imaging, surgical procedures, semiconductor processing, metal casting and audio equipment. The major problem with using SF6 in all of these applications is escape of the gas into the environment during handling.

Today, SF6 has been listed by the Intergovernmental Panel on Climate Change (IPCC) as a greenhouse gas with a global warming potential of 23,900 times greater than that of CO2 over a 100 year period. Being a synthetic gas it is not absorbed or destroyed naturally. Ten years ago, the contribution of SF6 to climate change was estimated at 195 Mt CO2 equivalents and it can remain active in the atmosphere for up to 3200 years.

While SF6 concentrations are about 10 parts per trillion in Earth’s atmosphere and projected to rise (see Figure 2), taking into account its greater global warming potential relative to CO2 brings it to an effective concentration of 240 parts per billion (CO2 equivalents), which is just about 1000 times less than the present-day levels of CO2 of around 410 parts per million.

A few words of caution are in order about health and safety issues concerning a molecule that results from the effect of electrical arcs, discharges, and sparks on SF6. It has been identified as disulfur decafluoride, S2F10, a gaseous molecule with a sulfur-sulfur bond and each sulfur atom octahedrally surrounded by five fluorine atoms. It likely forms via an electrically induced decomposition reaction of SF6:

S2F10 has a toxicity four times that of phosgene, COCl2!

In WWII, gaseous S2F10 was considered a chemical warfare pulmonary agent. Its toxicity emanates from the disproportionation reaction:

The SF6 is inert but the SF4 hydrolyses in the lungs to lethal sulfurous and hydrofluoric acid. Other toxic byproducts reported to be formed in electrical equipment containing SF6 subjected to arcs, sparks and discharges include: HF, SOF4, SO2F2, SOF2, and SO2.

Currently, electrical utilities and equipment are responsible for consuming 80% of the 10 000 tons of SF6 produced every year, an amount which is growing with the increasing global production and demand for renewable forms of energy, such as wind and solar. As a result, there has been an increase in the number of connections to the electricity grid compared with the traditional fossil power stations, with the consequential rise in the use of switchgear to deal with arcing and to stop short circuits.

Unfortunately, this growing usage of SF6 continues unabated due to the technological and economical challenges of switching to more environmentally benign alternatives. It has been estimated that emissions from use of the product on a cradle-to-grave basis was as high as 15% of the amount of product used. In an effort to ameliorate the rise of these emissions into the atmosphere, regulations are being imposed on producers and users that include recycling and minimizing of SF6 emissions during various operation, maintenance and refill processes.

Furthermore, companies are being required to monitor and report the cradle-to-grave SF6 emissions from their operations, beginning with production and including transportation, distribution, commissioning, service inspection, maintenance, and end-of-life collection.

Isn’t it interesting how two of the most troublesome and abundant greenhouse gases being emitted into our atmosphere, CO2 and SF6, are among the most thermodynamically and kinetically stable molecules on earth and therefore pose the greatest challenge for science and engineering solutions to global warming and climate change?

While thermochemical, electrochemical, and photocatalytic means of converting CO2 into value-added chemicals, pharmaceuticals, polymers, and fuels are under active development, similar attention to SF6 appears to be minuscule or completely lacking.

With this background as inspiration, the gauntlet is thrown down to chemists and chemical engineers to rise to the challenge of solving the looming SF6 problem, keeping in mind the health and safety toxicity issues of bi-products associated with the chemistry of SF6.

A final comment is a thought regarding the difference between greenhouse gases CO2 and SF6. The former is a naturally occurring molecule on earth although of course humans have added to the amount present by its activities. At times the amount of CO2 on earth has been much higher than now without the fault of humans. The amounts of CO2 can also be increased enormously by natural disasters such as volcanoes. However, the SF6 molecule is not naturally occurring and has been synthesized by humans who have been entirely responsible for introducing it into diverse technologies. It could be withdrawn from service in myriad applications although this would be costly and also would have safety implications unless a viable alternative is available.

I am deeply grateful to Paul Duchesne and Bob Davies for their critical and insightful feedback on this article and Chenxi Qian for his artwork that creatively embodies the climate concerns of increasing SF6 emissions in the earth’s atmosphere.

A natural way of turning off the carbon dioxide tap, California style
How to spot and support a river champion
Americans are migrating towards wildfires, reveals national study
Evidence of Microplastics in Arctic Sea Ice