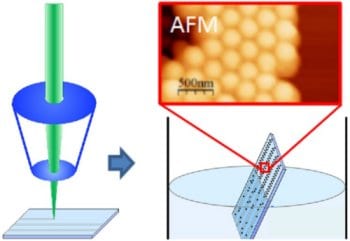 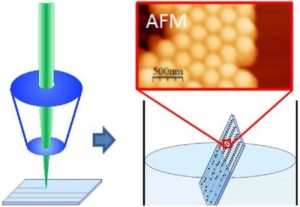 Bottom-up nano patterning of silicon oxide e.g. by a chemical surface modification has matured to become a useful tool for an efficient manufacturing of optoelectronic and electronic devices. In particular, patterned layers of colloidal nanoparticles have attracted considerable interest for a number of applications, ranging from graphic imaging with structural colors, optical filters based on photonic crystals via organic light-emitting devices to catalytically active nanoparticle patterns for structured growth of nanomaterials and quasi one-dimensional metallization with metal nanoparticle dispersions. In that field of research and technology, surface energy patterning using self-assembled monolayers plays an important role.

Researchers from Chemnitz University of Technology, Germany and Linköping University, Sweden, have now developed an approach to obtain colloidal crystal films from polystyrene nanoparticles (diameter 260 nm) as a model system in narrow structured molecular monolayers that are photochemically patterned. Using a laser-direct-write photothermal decomposition of the molecular monolayers, they suggest a slope-self-assembly process to deposit colloidal polymer nanoparticles from an aqueous dispersion within the hydrophilic regions of the alkyl-desorbed lines. This approach yields highly ordered colloidal nanoparticle stripes a widths of only 1.5 µm which is below 10 µm as reported previously.