A new catalyst facilitates the first general protocol for the cross-coupling of aryl chlorides and reactive organolithium reagents. 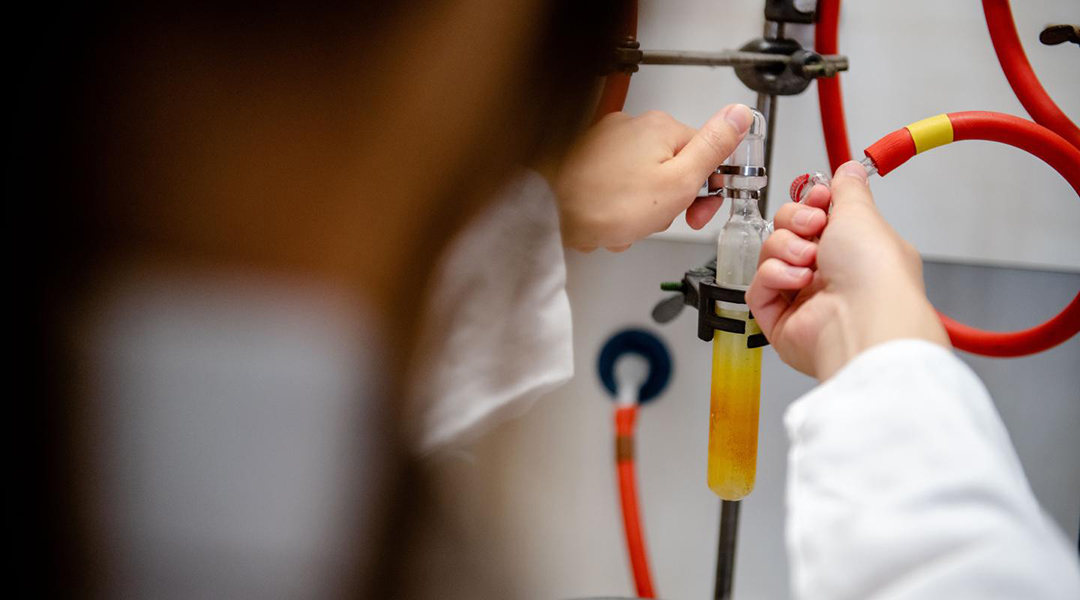 Within the realm of synthetic chemistry, the formation of carbon-carbon bonds through palladium-catalyzed cross-coupling revolutionized the way in which chemists could build and assemble molecules. This contribution to the synthetic toolkit was so impactful that the 2010 Nobel Prize in Chemistry was awarded to Richard Heck, Ei-ichi Negishi, and Akira Suzuki “for palladium-catalyzed cross couplings in organic synthesis”.

Equally as exciting are the countless innovations within this chemistry that expand its scope and capabilities. In a recent paper published in Angewandte Chemie, Professor Viktoria Däschlein-Gessner of Ruhr-University Bochum and her group report a recent advance in this area.

Organolithium compounds are useful reagents in synthetic chemistry, used to create carbon-carbon bonds to build molecular scaffolds. While they are found extensively in synthesis, they’re elevated reactivity limits their applications. “Due to their special properties, they are indispensable in many applications, even on an industrial scale,” says Däschlein-Gessner. “However, high reactivity often also leads to unwanted side reactions. As a result, organolithium compounds have so far only been considered to a limited extent, or even not at all, for some applications.”

Within the context of palladium-catalyzed cross-coupling reactions, organolithium compounds are generally not used, but are instead converted to more suitable coupling partners like organoboronates traditionally used in Suzuki cross-couplings. This is because during the reaction, organolithium reagents are too reactive and lead to a number of unwanted by-products that limit the efficiency of the reaction. But Däschlein-Gessner and her team were able to overcome these limitations using a new phosphine-palladium catalyst that helps suppress these side reactions.

In their study, they were able to selectively couple two carbon atoms using different organolithium compounds with aryl chloride coupling partners, which are difficult to use in cross-coupling reactions. Prior to Däschlein-Gessner’s paper, there were no general protocols for the coupling of these two partners in the literature.

According to the paper, the widespread limitation arises from the fact that aryl chlorides are difficult to use because their addition to the catalyst (in a step called oxidative addition) is slow at low temperatures and the addition of their organolithium partners (especially alkyllithium reagents) is quite fast. This results in wanted side reactions, such as the coupling of organolithium reagents with themselves instead of with the aryl chlorides. “Thus the coupling of aryl chlorides with alkyllithium reagents represents the most challenging combination and unresolved problem,” wrote the authors in their study.

To get around this and other mechanistic problems, electron rich ligands are usually attached to catalyst to speed up the oxidative addition of aryl halides at milder temperatures. While this has worked in other cases, Däschlein-Gessner notes that these ligands seem to reach a limit when it comes to alkyllithium compounds.

This led the team to develop a new class of electron-rich phosphine ligands called YPhos, which are exceedingly strong donors. “This encouraged us to test these ligands for their activities in the coupling of organolithium compounds including alkyllithiums with aryl chlorides, which led us to the development of the first generally applicable reaction protocol,” the team wrote.

What’s appealing about the reaction is that no additional additives are needed and it can be done at room temperature. This not only expands the arsenal of cross-coupling reactions, but means that intermediate steps can be avoided, which results in less metal-salt waste. The reaction proved to be highly selective, even when carried out on the scale of several grams of material, which is quite important if the catalyst is to be used on industrial scale.

“Their particular activity is not only advantageous in the described reactions, but also offers improvements for numerous other transformations in almost all areas of fine chemical synthesis,” said Däschlein-Gessner. In addition to the production of pharmaceuticals and chemicals for agriculture, these include fragrances and materials for organic light-emitting diodes.