Electronic components built from graphene could pave the way for smaller, faster and more green and sustainable electronic devices. 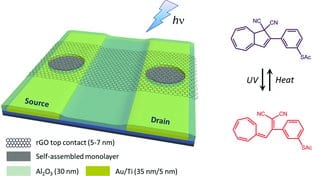 A molecular integrated circuit has been created by a group of chemists and physicists from the Department of Chemistry Nano-Science Center at the University of Copenhagen and Chinese Academy of Sciences, Beijing. The breakthrough was made possible through an innovative use of the two dimensional carbon material graphene.

Kasper Nørgaard, associate professor at the University of Copenhagen, believes that the first advantage of the newly developed graphene chip will be to ease the testing of future molecular electronic components. But he is also confident that it represents a first step towards proper integrated molecular circuits. “Graphene has some very interesting properties, which cannot be matched by any other material. What we have shown for the first time is that it’s possible to integrate a functional component on a graphene chip. I honestly feel this is front page news”, says Nørgaard.

The molecular computer chip is a sandwich built with one layer of gold, one of molecular components and one of the extremely thin carbon material graphene. The molecular transistor in the sandwich is switched on and of using a light impulse so one of the peculiar properties of graphene is highly useful. Even though graphene is made of carbon, it’s almost completely translucent.

The hunt for transistors, wires, contacts and other electronic components made from single molecules has had researchers working night and day. Unlike traditional components they are expected to require no heavy metals and rare earth elements. So they should be cheaper as well as less harmful to earth, water and animals. Unfortunately it has been fiendishly difficult to test how well these functional molecules work – until now.

Previously the testing of microscopic components had researchers resort to a method best compared to a lottery. Using the new graphene chip researchers can now place their molecules with great precision. This makes it faster and easier to test the functionality of molecular wires, contacts and diodes so that chemists will know in no time whether they need to get back to their beakers to develop new functional molecules, as Nørgaard explains.

“We’ve made a design, that’ll hold many different types of molecule” he says and goes on: “Because the graphene scaffold is closer to real chipdesign it does make it easier to test components, but of course it’s also a step on the road to making a real integrated circuit using molecular components. And we must not lose sight of the fact that molecular components do have to end up in an integrated circuit, if they are going to be any use at all in real life”.