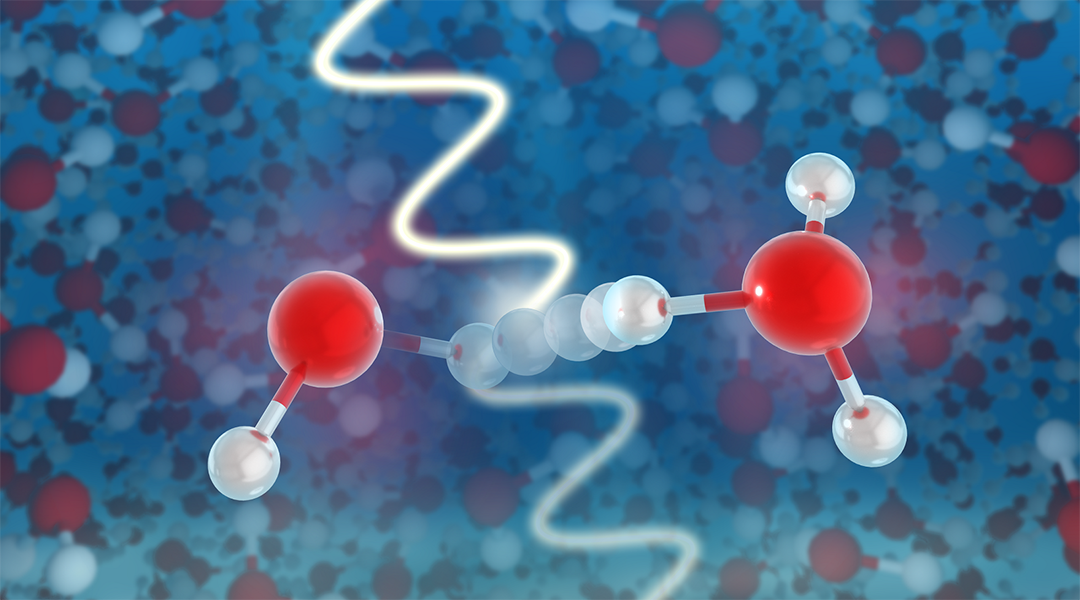 One of the earliest mechanisms we learn in organic chemistry is the proton transfer reaction. It is an elementary reaction of incredible significance not only in chemistry but in fields such as medicine, nuclear engineering, and environmental remediation. The reaction is ultrafast, and although evidence in the form of electrons ejected from water by radiolysis appeared in the 1960s, scientists have had no way to observe the residual positively charged ion, the other half of the reaction pair.

“The truly exciting thing is that we’ve witnessed the fastest chemical reaction in ionized water, which leads to the birth of the hydroxyl radical,” said Linda Young, the senior corresponding author of the study, in a press release. “The hydroxyl radical is itself of considerable importance, as it can diffuse through an organism, including our bodies, and damage virtually any macromolecule including DNA, RNA, and proteins.”

During this process, radiation with sufficient energy hits a water molecule and ejects an electron, leaving a positively charged water molecule (H2O+). The lifetime of the H2O+ is extremely short, and within a fraction of a trillionth of a second, H2O+ gives up a proton to another water molecule, creating hydronium (H3O+) and a hydroxyl (OH) radical.

The observation was made possible by ultrashort X-ray pulses generated by the Linac Coherent Light Source (LCLS) at SLAC. LCLS is able to provide what is essentially a “freeze-frame” for the reaction, meaning that the researchers could watch the evolution of the hydroxyl radical. “By adjusting the ‘color’ of these X-ray pulses, we can distinguish between the specific ions and molecules that participate,” said SLAC instrument scientist Bill Schlotter, who with Young led the conceptual design of the experiment.

According to the Argonne press release: “The ultrafast proton transfer that creates the hydroxyl radical gives rise to a special spectroscopic signature that indicates the rise of the hydroxyl radical and is a ‘time stamp’ for the initial creation of the H2O+.” According to Young, the spectra of both species is accessible because they exist in a “water window” where liquid water does not absorb light. The researchers would also have liked to isolate the spectroscopic signature of the H2O+ radical cation as well, but its lifetime is so short that its presence was only inferred from the OH spectroscopy measurements.

“The major accomplishment here is the development of a method to watch elementary proton transfer reactions in water and to have a clean probe for the hydroxyl radical,” Young said. “No one knew the time scale of proton transfer, so now we’ve measured it. No one had a way to follow the hydroxyl radical in complex systems on ultrafast timescales, and now we have a way to do that as well.”

The study provides a deeper mechanistic understanding of hydroxyl radical formation. This is of particular interest in medicine where such radicals formed during radiation therapy are known to cause significant damage; this new understanding could allow researchers and doctors to develop strategies to suppress OH radical formation, leading to safer treatment options.

The experiment design was led by Robin Santra of the Center for Free-Electron Laser Science at DESY in Germany. Santra showed that through ultrafast X-ray absorption, scientists could detect the structural dynamics, both in terms of electron and nuclear motion, near the ionization and proton transfer site.

“We could show that the X-ray data actually contain information on the dynamics of the water molecules that enable the proton transfer,” said Santra. “In just 50 quadrillionths of a second, the surrounding water molecules literally move in on the ionized H2O+ until one of them comes close enough to grab one of its protons in a sort of handshake, turning into hydronium H3O+ and leaving behind the hydroxyl radical OH.”

This work was motivated by earlier research by Zhi-Heng Loh from NTU Singapore, the lead author and co-corresponding author for this paper.

“Since joining NTU nine years ago, I and the members of my group have been studying the ultrafast dynamics that accompany the ionization of molecules, both in the gas phase and in aqueous medium, using femtosecond laser pulses spanning the infrared to the extreme ultraviolet. Our earlier work on ionized liquid water provided a glimpse of the lifetime of the H2O+ radical cation, albeit via indirect probing in the near-infrared,” Loh said. “We realized that a definitive experiment to observe the H2O+ radical cation would require soft X-ray probing, which however, lies beyond the capability of most tabletop femtosecond light sources. So when Linda approached me after hearing my talk on ionized water at a meeting in 2016, and wanted to collaborate on an experiment at the LCLS X-ray free-electron laser, I was absolutely thrilled.”