Scientists discover new exoplanet with an atmosphere ripe for study

Astronomers have discovered a new, temperate sub-Neptune sized exoplanet with a 24-day orbital period orbiting a nearby M dwarf star. 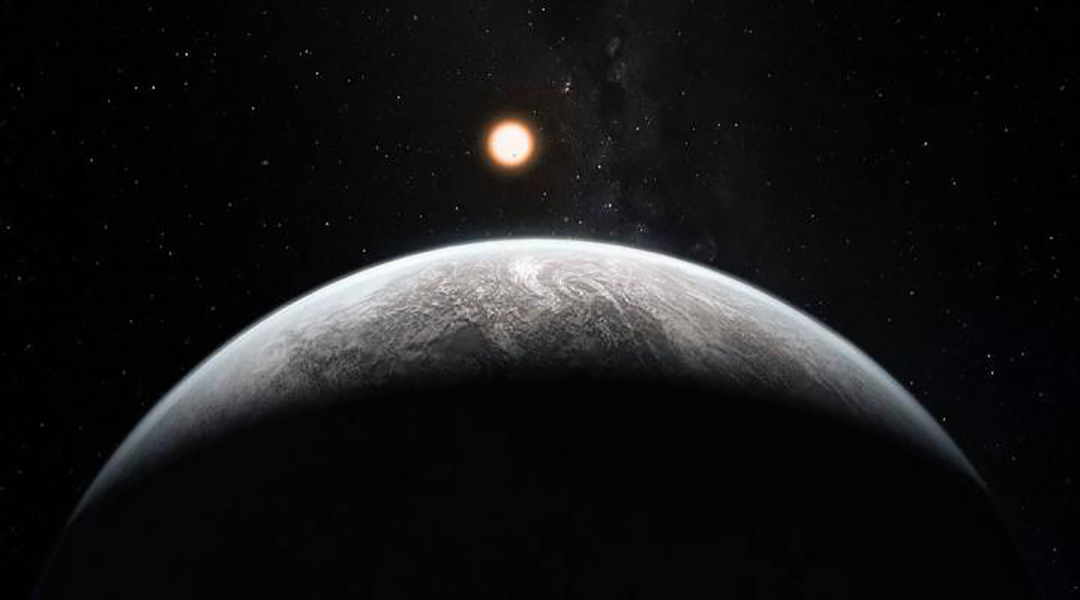 An international group of collaborators, including scientists from NASA’s Jet Propulsion Laboratory and The University of New Mexico, have discovered a new, temperate sub-Neptune sized exoplanet with a 24-day orbital period orbiting a nearby M dwarf star. The recent discovery offers exciting research opportunities thanks to the planet’s substantial atmosphere, small star, and how fast the system is moving away from the Earth.

The exoplanet, TOI-1231 b, was detected using photometric data from the Transiting Exoplanet Survey Satellite (TESS) and followed up with observations using the Planet Finder Spectrograph (PFS) on the Magellan Clay telescope at Las Campanas Observatory in Chile. The PFS is a sophisticated instrument that detects exoplanets through their gravitational influence on their host stars. As the planets orbit their hosts, the measured stellar velocities vary periodically, revealing the planetary presence and information about their mass and orbit.

The observing strategy adopted by NASA’s TESS, which divides each hemisphere into 13 sectors that are surveyed for roughly 28 days, is producing the most comprehensive all-sky search for transiting planets. This approach has already proven its capability to detect both large and small planets around stars ranging from sun-like down to low-mass M dwarf stars. M dwarf stars, also known as a red dwarf, are the most common type of star in the Milky Way making up some 70 percent of all stars in the galaxy.

M dwarfs are smaller and possess a fraction of the sun’s mass and have low luminosity. Because an M dwarf is smaller, when a planet of a given size transits the star, the amount of light that is blocked out by the planet is larger, making the transit more easily detectable. Imagine an Earth-like planet passing in front of a star the size of the sun, it’s going to block out a tiny bit of light; but if it’s passing in front of a star that’s a lot smaller, the proportion of light that’s blocked out will be larger. In a sense, this creates a larger shadow on the surface of the star, making planets around M dwarfs more easily detectable and easier to study.

Although it enables the detection of exoplanets across the sky, TESS’s survey strategy also produces significant observational biases based on orbital period. Exoplanets must transit their host stars at least twice within TESS ‘s observing span to be detected with the correct period by the Science Processing Operations Center (SPOC) pipeline and the Quick Look Pipeline (QLP), which search the 2-minute and 30-minute cadence TESS data, respectively. Because 74 percent of TESS’ total sky coverage is only observed for 28 days, the majority of TESS exoplanets detected have periods less than 14 days. TOI-1231b’s 24-day period, therefore, makes its discovery even more valuable.

NASA JPL scientist Jennifer Burt, the lead author of the paper, along with her collaborators including Diana Dragomir, an assistant professor in UNM’s Department of Physics and Astronomy, measured both the radius and mass of the planet.

“Working with a group of excellent astronomers spread across the globe, we were able to assemble the data necessary to characterize the host star and measure both the radius and mass of the planet,” said Burt. “Those values in turn allowed us to calculate the planet’s bulk density and hypothesize about what the planet is made out of. TOI-1231 b is pretty similar in size and density to Neptune, so we think it has a similarly large, gaseous atmosphere.”

“Another advantage of exoplanets orbiting M dwarf hosts is that we can measure their masses easier because the ratio of the planet mass to the stellar mass is also larger. When the star is smaller and less massive, it makes detection methods work better because the planet suddenly plays a bigger role as it stands out more easily in relation to the star,” explained Dragomir. “Like the shadow cast on the star. The smaller the star, the less massive the star, the more the effect of the planet can be detected.

“Even though TOI 1231b is eight times closer to its star than the Earth is to the Sun, its temperature is similar to that of Earth, thanks to its cooler and less bright host star,” says Dragomir. “However, the planet itself is actually larger than earth and a little bit smaller than Neptune – we could call it a sub-Neptune.”

Burt and Dragomir, who actually initiated this research while they were Fellows at MIT’s Kavli Institute, worked with scientists specializing in observing and characterizing the atmospheres of small planets to figure out which current and future space-based missions might be able to peer into TOI-1231 b’s outer layers to inform researchers exactly what kinds of gases are swirling around the planet. With a temperature around 330 Kelvin or 140 degrees Fahrenheit, TOI-1231b is one of the coolest, small exoplanets accessible for atmospheric studies discovered thus far.

Past research suggests planets this cool may have clouds high in their atmospheres, which makes it hard to determine what types of gases surround them. But new observations of another small, cool planet called K2-18 b broke this trend and showed evidence of water in its atmosphere, surprising many astronomers.

“TOI-1231 b is one of the only other planets we know of in a similar size and temperature range, so future observations of this new planet will let us determine just how common (or rare) it is for water clouds to form around these temperate worlds,” said Burt.

“The low density of TOI 1231b indicates that it is surrounded by a substantial atmosphere rather than being a rocky planet. But the composition and extent of this atmosphere are unknown!” said Dragomir. “TOI1231b could have a large hydrogen or hydrogen-helium atmosphere, or a denser water vapor atmosphere. Each of these would point to a different origin, allowing astronomers to understand whether and how planets form differently around M dwarfs when compared to the planets around our Sun, for example. Our upcoming HST observations will begin to answer these questions, and JWST promises an even more thorough look into the planet’s atmosphere.”

Another way to study the planet’s atmosphere is to investigate whether gas is being blown away, by looking for evidence of atoms like hydrogen and helium surrounding the planet as it transits across the face of its host star. Generally, hydrogen atoms are almost impossible to detect because their presence is masked by interstellar gas. But this planet-star system offers a unique opportunity to apply this method because of how fast it’s moving away from the Earth.

“One of the most intriguing results of the last two decades of exoplanet science is that, thus far, none of the new planetary systems we’ve discovered look anything like our own solar system,” said Burt. “They’re full of planets between the size of Earth and Neptune on orbits much shorter than Mercury’s, so we don’t have any local examples to compare them to. This new planet we’ve discovered is still weird – but it’s one step closer to being somewhat like our neighborhood planets. Compared to most transiting planets detected thus far, which often have scorching temperatures in the many hundreds or thousands of degrees, TOI-1231 b is positively frigid.”

In closing, Dragomir reflects that “this planet joins the ranks of just two or three other nearby small exoplanets that will be scrutinized with every chance we get and using a wide range of telescopes, for years to come so keep an eye out for new TOI1231b developments!”

Press release provided by the University of New Mexico

The ongoing search for life on Venus
Supermassive black holes on a collision course
Pluto's beating heart drives icy winds
Will the flight to Mars be too dangerous for a crewed mission?