This pollen sponge can absorb oil contaminants, such as gasoline and motor oil, at a rate comparable to commercial oil absorbents 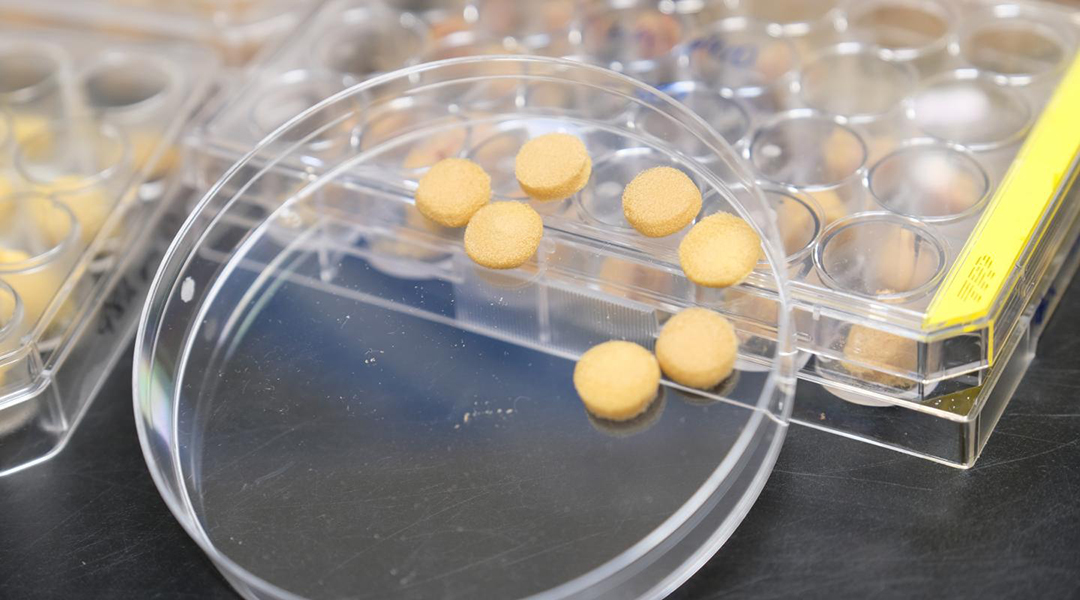 Tough pollen grains were transformed into a soft gel-like material, before freeze-drying the material. Image: NTU

A team of scientists led by Nanyang Technological University, Singapore (NTU) has created a reusable, biodegradable sponge that can readily soak up oil and other organic solvents from contaminated water sources, making it a promising alternative for tackling marine oil spills.

Oil spills are difficult to clean up, and result in severe long-lasting damage to the marine ecosystem. Conventional clean-up methods, including using chemical dispersants to break oil down into very small droplets, or absorbing it with expensive, unrecyclable materials, may worsen the damage.

Made of sunflower pollen, the sponge repels water thanks to a coat of natural fatty acid. In lab experiments, the scientists showed the sponge’s ability to absorb oil contaminants of various densities, such as gasoline and motor oil, at a rate comparable to that of commercial oil absorbents.

So far, the researchers have engineered sponges that measure 5cm in diameter. The research team, made up of scientists from NTU Singapore and Sungkyunkwan University in South Korea, believes that these sponges, when scaled up, could be an eco-friendly alternative to tackle marine oil spills.

Professor Cho Nam-Joon from the NTU School of Materials Science and Engineering, who led the study, said: “By fine tuning the material properties of pollen, our team successfully developed a sponge that can selectively target oil in contaminated water sources and absorb it. Using a material that is found abundantly in nature also makes the sponge affordable, biodegradable, and eco-friendly.”

This study builds on NTU’s body of work on finding new uses for pollen, known as the diamond of the plant kingdom for its hard exterior, by transforming its tough shell into microgel particles. This soft, gel-like material is then used as a building block for a new category of environmentally sustainable materials.

Last year, Cho, together with NTU President Professor Subra Suresh, led a research team to create a paper-like material from pollen as a greener alternative to paper created from trees. This ‘pollen paper’ also bends and curls in response to changing levels of environmental humidity, a trait that could be useful for soft robots, sensors, and artificial muscles.

“Pollen that is not used for plant pollination is often considered biological waste,” added Cho. “Through our work, we try to find new uses for this ‘waste’ and turn it into a natural resource that is renewable, affordable, and biodegradable. Pollen is also biocompatible. It does not cause an immunological, allergic or toxic reaction when exposed to body tissues, making it potentially suitable for applications such as wound dressing, prosthetics, and implantable electronics.”

The findings were published in the scientific journal Advanced Functional Materials.

Building a sponge from pollen

To form the sponge, the NTU team first transformed the ultra-tough pollen grains from sunflowers into a pliable, gel-like material through a chemical process akin to conventional soap-making.

This process includes removing the sticky oil-based pollen cement that coats the grain’s surface, before incubating the pollen in alkaline conditions for three days. The resulting gel-like material was then freeze-dried.

These processes resulted in the formation of pollen sponges with 3D porous architectures. The sponges were briefly heated to 200°C — a step that makes their form and structure stable after repeatedly absorbing and releasing liquids. Heating also led to a two-fold improvement in the sponge’s resistance to deformation, the scientists found.

To make sure the sponge selectively targets oil and does not absorb water, the scientists coated it with a layer of stearic acid, a type of fatty acid found commonly in animal and vegetable fat. This renders the sponge hydrophobic while maintaining its structural integrity.

The scientists performed oil-absorption tests on the pollen sponge with oils and organic solvents of varying densities, such as gasoline, pump oil, and n-hexane (a chemical found in crude oil).

They also tested the sponge for its durability and reusability by repeatedly soaking it in silicone oil, then squeezing the oil out. They found that this process could go on for at least 10 cycles.

In a final proof-of-concept experiment, the team tested the ability of a sponge 1.5cm in diameter and 5mm in height to absorb motor oil from a contaminated water sample. The sponge readily absorbed the motor oil in less than 2 minutes.

“Collectively, these results demonstrate that the pollen sponge can selectively absorb and release oil contaminants and has similar performance levels to commercial oil absorbents while demonstrating compelling properties such as low cost, biocompatibility, and sustainable production,” said Cho.

Going forward, the researchers plan to scale up the size of pollen sponges to meet industry needs. They are also looking to collaborate with non-governmental organisations and international partners to conduct pilot tests with pollen sponges in real-life environments.

“We hope our innovative pollen materials can one day replace widely-used plastics and help to curb the global issue of plastic pollution,” said Cho.