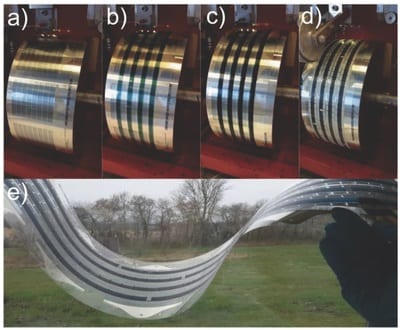 A new paper by Cheng et al., recently published in Advanced Science, introduces a new fabrication method for fullerene-free organic solar cells which aims to help address some of the limitations of these cells and to improve production efficiency. Cheng et al. avoid the use of fullerenes due to their absorption limitations and lower long-term stability, and instead focus on fullerene-free organic solar cells. To date, these have only been manufactured on a very small scale, as they are not yet able to be easily fabricated over a large area in the same way as those containing fullerenes. 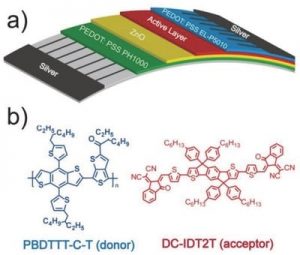 The development of efficient and stable solar cells is critical for the renewable energy industry and to reduce carbon emissions. Traditional silicon-based solar cells, while efficient, require an expensive and complex manufacturing method.  In response to the disadvantages of silicon-based solar cells, new alternatives have been sought, such as polymer-based, organic solar cells. These alternatives offer a cheaper and easier manufacturing process, but have previously been hindered by stability and efficiency limitations. Roll-to-roll fabrication has been suggested as a potential method for advancing the industrial production of fullerene-free organic solar cells as it is fast and able to produce large, flexible and stable solar cells in favorable conditions.

Using the roll-to-roll method the authors successfully fabricated a fullerene-free organic solar cell with a polymer donor of PBDTTT-C-T and a non-fullerene small molecule acceptor of DC-IDT2T. They found that their best power conversion efficiency value of 1.019% was achieved with a device area of over 1 cm2 and a flexible substrate, in conjunction with the vacuum-free, ambient and (ITO)-free conditions provided by roll-to-roll fabrication. Thermal annealing and the use of a chlorobenzene processing solvent produced the best results. When comparing fullerene-based and fullerene-free examples the authors found that the fullerene-free solar cell was the most stable, indicating the potential of this type of cell to become a viable alternative to traditional solar cells.