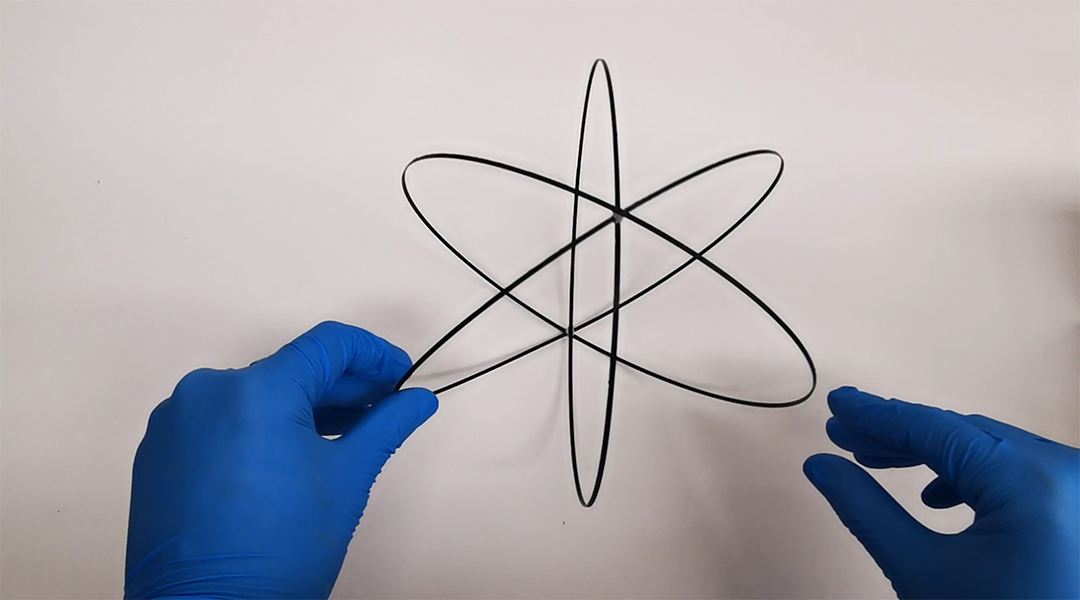 Ring structures are widely used in many engineering and biomedical applications, such as satellite solar panels and biomedical stents. These structures are usually composed of a thin canopy supported by stiff skeleton frames to provide the required stiffness and stability. Although they are attractive alternatives to rigid counterparts because of their lightweight, transporting large structures can be challenging and sometimes limits application.

As a result, efforts have been devoted to determining materials with space-efficient packing mechanisms. For example, origami, an art of paper folding, has been widely studied in recent years for space-saving packaging and deployable structures. In origami, two-dimensional (2D) sheets are folded into three-dimensional (3D) structures. However, to achieve the desired final folded shape, most origami designs require a person to have the right skill to manipulate the paper. The reliance on dexterity reduces the error tolerance and the reliability of the folding and deploying processes.

In a recent study, researchers at the Ohio State University and Georgia Institute of Technology have introduced the concept of “ring origami”, which are foldable ring geometries. Under an initial mechanical twisting, the ring can be folded and into a smaller, desired shape. Due to mechanical stability, the folding process can be self-guided or snap-fold into the final desired shape once the initial twisting force is applied.

This self-guidance can tolerate the errors of the initial twisting force and guarantees the final shape. However, not every ring can have this self-guidance feature, and the key is to find the proper design of ring cross-section shape. Numerical tools were used to study the snap-folding of the origami ring and guide its structural design for optimized folding behavior.

After learning the fundamental mechanism, the team further assembled multiple origami rings that allow the rapid transformation of pop-up structures from an almost 2D shape to a 3D structure in a self-guided manner. By using this strategy, the team demonstrates folding and deploying of 3D assemblies with significant packing ratios.

This concept can apply to various devices including aerospace solar panels and biomedical stents. In these cases, once the external load reaches a critical value, the structure triggers a snap-through deformation to the desired stable configuration. The snapping behavior leads to the deformed state with high geometric precision and a high tolerance of loading error under external perturbations.

Although the origami ring concept offers a new way to design snap-folding structures, there are still a few challenges to overcome. For example, as the number of rings in the structure increases, determining how to fold these rings could be a challenge as neighboring rings may interfere each other during folding. Also, adding a canopy to form a mask could also interfere the folding. The team is currently working on addressing these challenges.

A new way to create permanent magnets
A new diode could be a game changer for server farms and aircraft
A plant to help the planet: A strong, tough, and scalable material from fast-growing bamboo
Indoor 5G gets a much-needed signal boost