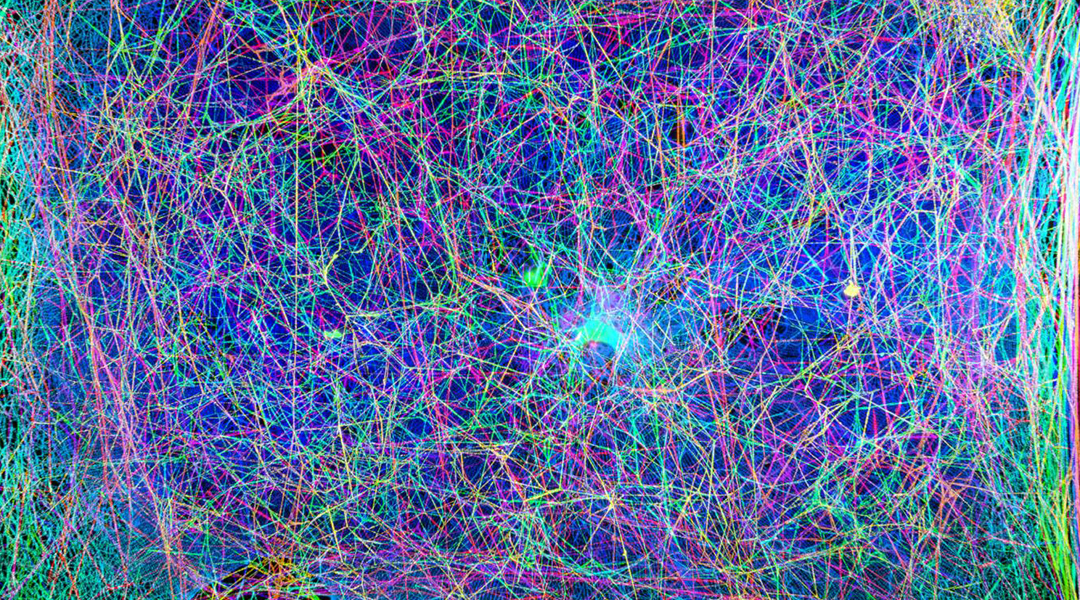 Cross-sectional images of a spider web were combined and translated into music. Isabelle Su and Markus Buehler

Humans think about the world in a very human-centric way, and in fairness, how can we not? But every now and then, research provides us with insights into the perceptions and experiences of other species, providing a glimpse into an almost alien world.

This is what Markus Buehler, professor in engineering at MIT, and his team have been exploring; specifically, how spiders build their webs and use them to communicate. “The spider lives in an environment of vibrating strings,” he said in a statement. “They don’t see very well, so they sense their world through vibrations, which have different frequencies.”

Spiders are of course expert builders, weaving strands of silk into intricate 3D webs that serve as their home and hunting ground. By “plucking” the strands of their web like the strings of a guitar and listening to how the sound of the web changes, they gain information about their surroundings such as the presence of a potential mate, prey caught in a trap, or the structural integrity of the web. They perceive their environment through, well, music.

While scientists, including Buehler, have spent decades studying this hidden language, truly understanding and replicating it has remained challenging. However, Buehler and his co-workers have recently made breakthrough.

Presenting their results at the spring meeting of the American Chemical Society (ACS) being held online, the team of scientists report that they have successfully translated the structure of a web into music.

They did so by scanning a natural web with lasers to capture 2D cross-sections and then used computer algorithms to reconstruct the web’s 3D network. By assigning different frequencies of sound to individual strands, the algorithm could then assign musical “notes” that combined frequency patterns made as a result of the web’s 3D structure. They then created a harp-like instrument upon which they could play their spider music.

“The sounds our instrument makes changes during the process, reflecting the way the spider builds the web,” Buehler said. “So, we can explore the temporal sequence of how the web is being constructed in audible form.” The team has played their spider music in live performances around the world.

Scanning the web at different points of construction also allowed the team to transform each stage of web building into music with different sounds. The hope is, by breaking down the web and analyzing it both visually and audibly, new insights into web building can be gained for a number of different materials applications.

To better demonstrate this, a virtual reality setup was built to allow people to “enter” the web. “The virtual reality environment is really intriguing because your ears are going to pick up structural features that you might see but not immediately recognize,” Buehler explained. “By hearing it and seeing it at the same time, you can really start to understand the environment the spider lives in.”

Aside from providing a “new source for musical inspiration that is very different from the usual human experience”, the study has another practical purpose. In understanding how spiders “print” their webs, researchers could use this knowledge to build better 3D printers for complex and delicate microelectronics. “The spider’s way of ‘printing’ the web is remarkable because no support material is used, as is often needed in current 3D printing methods,” added Buehler.

Speaking their language could also allow scientists to directly communicate with spiders, perhaps influencing the types of webs that they build or helping to better understand their behavior. Though imperceptible to the human ear, the team recorded web vibrations from different activities, such as web building or when attracting mates, and trained a machine learning algorithm to classify the different sounds or notes according to activity.

“Now we’re trying to generate synthetic signals to basically speak the language of the spider,” Buehler said. “If we expose them to certain patterns of rhythms or vibrations, can we affect what they do, and can we begin to communicate with them? Those are really exciting ideas.”