Using ultrasonic standing waves, researchers levitate droplets of solvent, which can be used for chemical reactions. 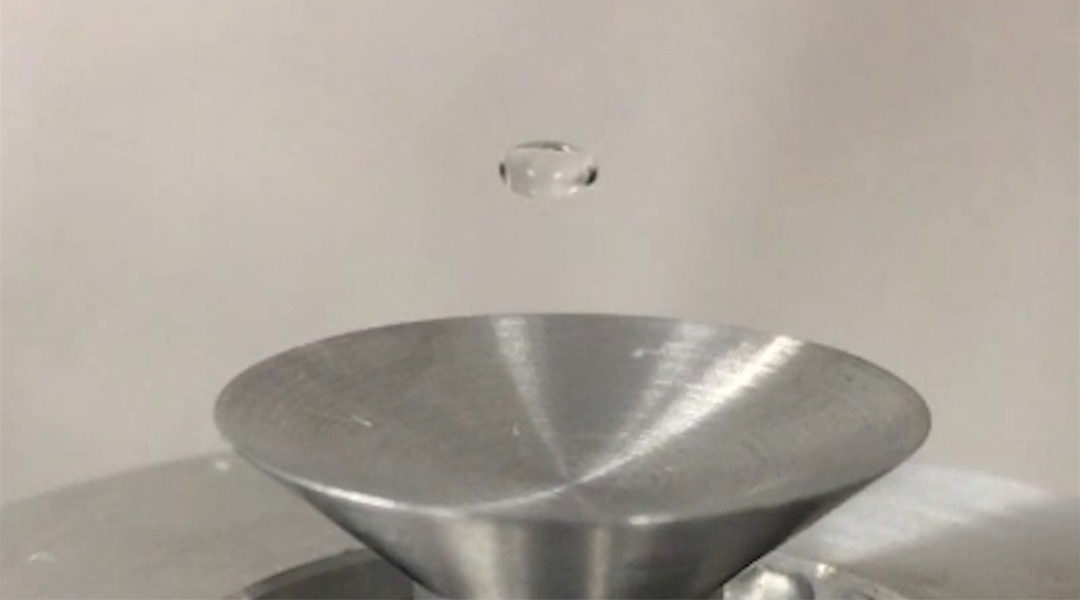 Running chemical reactions requires a an awful lot of glassware. For labs without a dishwasher, the cleaning and management of dirty glassware can be a massive source of friction. No one enjoys discovering that a reaction can’t be run because all of the 1 liter flasks in the lab are caked with miscellaneous brown sludge.

If chemistry could be done without the need for a flask, labs might become a good deal more harmonious, not to mention the savings in detergent and washing acetone. A group from Japan has dared to dream this dream, and while their recent report in Advanced Science is carried out at a small scale, it offers a tantalizing glimpse into what would be a truly sci-fi future for chemistry.

Droplets of solvent were levitated in between an ultrasonic transducer and a reflector (see image above). This system produced an ultrasonic standing wave powerful enough to counteract the effects of gravity.

Reagents could then be added to the levitating solvent. In the example shown below, peroxide was added to a chemical that colors as it oxidizes. The team also demonstrated that the technique could be applied to a polymerization reaction and click chemistry.

In the polymerization reaction, the liquid turned into a gel after one minute, and the levitating gel was collected with a cotton swab. The click reaction took a little longer, with the reaction monitored by HPLC at regular intervals up to 20 minutes.

The levitating solvent usefulness isn’t restricted to traditional organic chemistry. The team also suspended a linear DNA fragment in the standing ultrasonic wave. A restriction enzyme was then added and allowed to do its work for 15 minutes. The success of the DNA digestion was confirmed by electrophoresis.

While this work is presently limited in terms of its scale, and by the need for physical containers to be used in preparation and purification, it serves as an elegant proof of concept for this technique.

Three distinct molecular qubits in one supramolecule
Unique insights afforded to us by computational chemistry
Decarbonizing the chemical industry with sustainable photons
Buttoned up biomolecules: A click reaction for living systems