By cooling antimatter to absolute zero, physicists may finally be able to answer questions that could fundamentally alter our understanding of the universe. 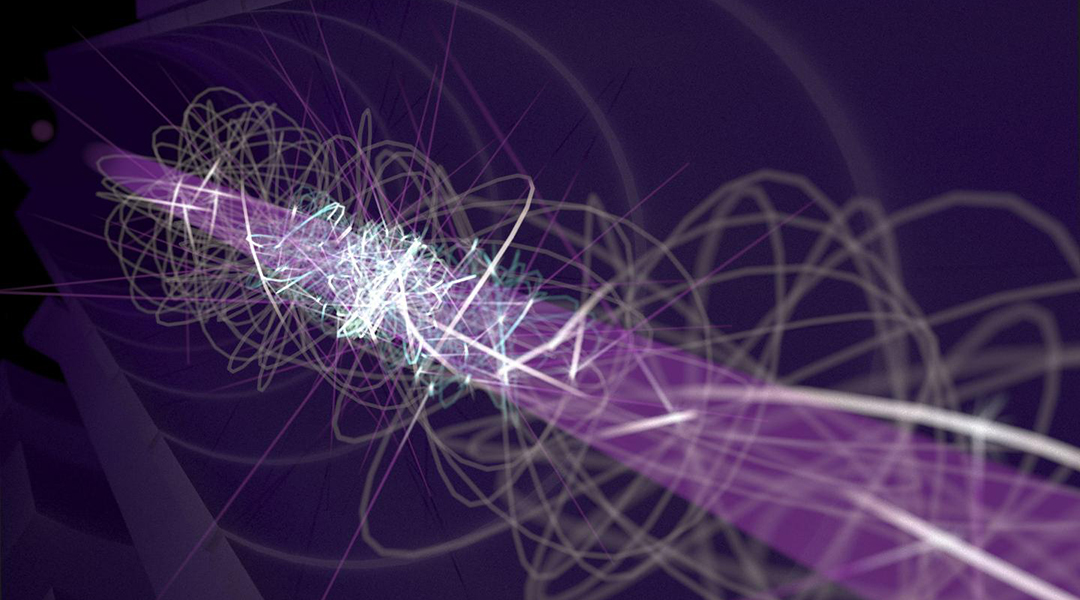 An artistic illustration of the movement of an antihydrogen atom in the ALPHA magnetic trap. Image: Chukman So/TRIUMF

Antimatter is perhaps one of the most exciting discoveries made in physics during the 20th century — though this of course depends on who you might ask. Defined as matter composed of antiparticles, it is the opposite and compliment to “ordinary” matter, like having an identical twin from the Bizarro World who does everything you do but opposite. Cutting your hair? Bizzaro twin is growing it. Confident in your decisions? Bizarro twin regrets theirs.

Every particle we know of has a “Bizzaro” twin, or to put it more scientifically, an antimatter partner that is virtually identical but with opposite properties. An electron, for example, has a negative charge and its antiparticle, called a positron, is identical save for its positive charge.

Beyond its sci-fi novelty, antimatter is important to our understanding of how the universe works, but it remains one of the greatest mysteries in physics. While physics predicts that matter and antimatter should behave oppositely and have been created in equal quantities during the Big Bang, the universe appears to be made almost entirely of matter. Very little antimatter exists, and why this is the case, nobody can say. This is in addition to the fact that when a particle and its antiparticle meet, they annihilate each other in a flash of light and energy. As a result, antimatter atoms are exceptionally difficult to create and control in our world, making answering fundamental questions such as “Do the same laws of nature apply to both matter and antimatter?” difficult to answer.

But there does seem to be (a pin prick of) light at the end of the tunnel, as this week scientists at CERN have announced that in a world first, they were able to cool a sample of antihydrogen down to near absolute zero (−273.15 degrees Celsius, or -459.67 Fahrenheit) — the temperature where a system reaches its lowest possible energy or thermal motion.

The results mark a watershed moment for ALPHA’s decades-long program of antimatter research, which began with the creation and trapping of antihydrogen for a world-record one thousand seconds in 2011.

“It was a bit of crazy dream to manipulate antimatter with laser,” said Makoto Fujiwara, ALPHA-Canada spokesperson, TRIUMF scientist, and the original proponent of the laser cooling idea. “I am thrilled that our dream has finally come true […].”

Atoms can be cooled by hitting them with specific wavelengths of light, the energy from which they absorb and spontaneously re-emit. Since photons carry both energy and momentum, when they collide with another particle, they transfer their momentum and slow down said particle. This becomes more complicated with gaseous particles, like a bunch of hydrogen or antihydrogen atoms, which are continuously in motion because atoms moving toward the light-emitting laser will absorb wavelengths of light that are different to those moving away — thanks, Doppler effect! To cool the whole “cloud”, the laser must be pulsed at specific frequencies or wavelengths, starting high and then gradually moving low, to eventually cool all the atoms (or antiatoms!).

Why is this important you might ask? “The antihydrogen atom, the simplest example of atomic antimatter, offers unique opportunities in challenging the foundational framework of contemporary physics,” wrote the authors in their study.

At such cold temperatures, atoms and antiatoms move very, very slowly, making measurements much easier. At absolute zero, the CERN team will be able to perform a variety of tests to investigate the properties and characteristics of antimatter and then compare them to “the well studied hydrogen atom”, which will allow them to test fundamental symmetries of our universe predicted by CPT symmetry — in plain terms (I tried), it predicts a mirror-image of our universe where matter is replaced with antimatter and the same physical laws evolve as we move backward in time. Essentially, we are equal and opposite to this mirror world in both time and space. But there are holes in this theory, and this is exactly what the CERN team is trying to prove.

“These answers may fundamentally alter our understanding of our Universe,” said Takamasa Momose, the University of British Columbia (UBC) researcher with ALPHA’s Canadian team who led the development of the laser.

One experiment that the team will pursue is investigating whether gravity affects antimatter in the same way it affects matter. Does antimatter fall toward the Earth at the same rate as ordinary matter, or does it behave differently? This has been difficult to determine given the fact that the affects of gravity can be difficult to measure on gaseous particles. But at ultra cold temperatures, like absolute zero, these particles behave a little more like a liquid than a gas.

If symmetry holds true, the antihydrogen atoms should fall upwards, but most mainstream physicists believe this will not happen; they believe the antihydrogen will fall. But demonstrating that these symmetries are broken will result in a very exciting fundamental revision of our ideas about physics, affecting not only particle physics but also our understanding of gravity and relativity (and maybe even Bizarro World).

The CERN team expects their experiments will begin sometime this August. I’ll be waiting on the edge of my seat. Who knows what will be discovered?

A bright future for supernovae
How does the structure of ice change around impurities?
Stable qubits for more compact quantum computers
Discovery of an Unusual Quasiparticle in a 2D Material