Electrical conductivity increased by as much as a factor of 50. 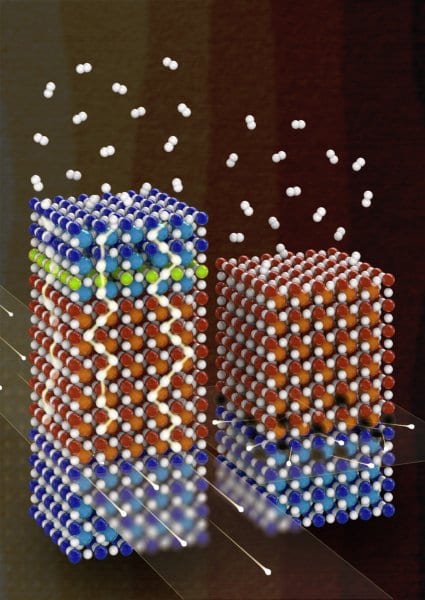 Researchers from MESA+, the research institute for nanotechnology at the University of Twente, have developed a method to reduce the number of ‘defects’ in heterogeneous oxide materials. As a result, the electrical conductivity of these materials can increase substantially; in their experiments, the researchers observed an increase by as much as a factor of 50. The secret lies in an extra layer of copper oxide. The materials are, for example, interesting for fuel cells, sensors and catalysts.

There is increasing interest in so-called heterogeneous oxide materials, partly because of their electrical properties. These materials, which consist of several layers and where the atoms have reacted with oxygen, can be used in fuel cells, sensors and catalysts. With these materials it is important that all of the atoms in the crystal lattice have reacted with oxygen, but in practice the materials often contain defects: points on the crystal lattice where there should be an oxygen atom, but where this is not the case.

In collaboration with researchers from the universities of Antwerp and Amsterdam, researchers at the University of Twente have now found a method to greatly reduce the number of defects. By adding an extra layer of copper oxide to the material it appears that oxygen in the air penetrates the material better, thereby repairing the defects. In their experiments, the researchers observed an increase in the electrical conductivity by a factor of 50.

According to Mark Huijben, one of the researchers involved, the research not only produces relevant fundamental scientific knowledge, but society also benefits from the improved control during the production of smart materials. “At the University of Twente we have a lot of knowledge and high-quality facilities in the field of materials research. We are engaged in fundamental research into and development of all kinds of smart materials for numerous applications. For example, we will soon publish another article in Advanced Materials that examines the limits of nanotechnology for a new material that enables you to influence the magnetic properties with an electric field. This material is interesting for applications in the field of data storage, for example.”