Geoff Ozin asks if carbon dioxide capture and utilization, a potential solution to the CO2 problem, is feasible with today's photo-conversion technology.

Because of energy and climate concerns, research into carbon dioxide capture and utilization has skyrocketed in the past decade. Of all the different approaches proposed to solve this problem the only one that appears to offer the capacity to have a significant impact on greenhouse gas emissions, is a solar-to-chemical conversion gas-phase artificial photosynthesis process with an efficiency that can surpass natural photosynthesis. The goal is to sequester carbon dioxide either from concentrated sources and/or thin air and transform it to an organic fuel or chemical feedstock using sunlight as the only energy input.

The intergovernmental panel on climate change, the trillion tonne communiqué and the carbon exchange in 2014 aptly put the intertwined climate and energy conundrum into stark perspective with some key facts and messages that include:

• Remaining fossil fuels should stay in the ground

To amplify on the science and technology of artificial photosynthesis, the Holy Grail is to discover a carbon dioxide photo-catalyst that is at least an order of magnitude more efficient than natural photosynthesis, one that can convert at least 10% of sunlight into organic fuels or chemicals. 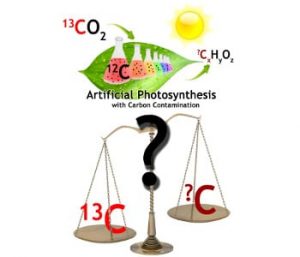 Translated into the recommended United States Department of Energy metric of 10% efficiency for the solar powered transformation of carbon dioxide to carbon monoxide, methane or methanol requires the discovery of a photo-catalyst that can achieve conversion rates of millimoles per gram of catalyst per hour at a solar irradiance of AM 1.5.

Research on photo-catalytic water splitting into hydrogen and oxygen greatly outweighs that on carbon dioxide reduction to organic chemicals and fuels where the bulk of the work today is conducted in the aqueous phase with relatively little effort being expended on the more practical gas phase process. For water splitting in the aqueous phase state-of-the-art photo-catalysts achieve rates of 10 mmol gcat-1 hour-1 with photonic efficiencies of 56%.

Of the dozen or so reports that do describe gas phase carbon dioxide photo-reduction the photo-catalyst is based on single or multi-component nano-structured materials, mainly metals and metal oxides, and organic products are usually characterized by gas-chromatography.

Generally speaking the majority of reported carbon dioxide conversion rates and efficiencies are currently well below the US Department of Energy 10% target required for a practical artificial photosynthesis process that could be engineered at a large enough scale to have a meaningful effect on the reduction of greenhouse gas emissions.

Even though valiant measures are taken through solvent and chemical removal, oxygen plasma and high temperature oxidation post-treatment methods to strip nano-structured photocatalysts of adventitious carbon, the problem of artifacts arising from such carbon residues can remain.

The main concern comes from carbon contamination on the surface and within the bulk of photo-catalysts. This kind of carbon residue, which can originate from organics in the environment as well as from incomplete removal of solvents, precursors, surfactants and additives and their decomposition products, can complicate the analysis of organic products by gas-chromatography, giving artificially elevated rates of photo-conversion.

This is a problem that can arise from carbon residues as low as 0.001- 0.1 wt % of the photo-catalyst, which can only be revealed and quantified by 13CO2 isotope tracer experiments best analyzed by on-line and coupled gas-chromatography mass-spectroscopy.

Very few literature reports have included this kind of isotope tracing data so any conclusions drawn about photo-catalysts boasting champion photo-conversion efficiencies that lack this information must be considered dubious at best.

Of the very few that have employed 13CO2 isotope labeling it is important to realize that it is not only evidence of 13C labeling that matters but also the 12C/13C ratio of unlabelled to labeled organic photo-products, enabling one to define the selectivity towards real products of carbon dioxide photo-catalysis relative to artifacts of deleterious carbon contamination.

Another pitfall that can go unrecognized with 13CO2 isotope labeling experiments which are required to differentiate reality from artifact in the formation of solar fuels is the specified purity of the 13CO2 from the supplier, which for the cheaper lower grade 13C enriched carbon dioxide often contains significant amounts of 13CH4, so buyer beware!

Without this pivotal isotope tracer confirmatory information it is exceptionally hard to judge fact from fiction in the bourgeoning field of gas-phase carbon dioxide photo-catalysis, a difficulty which is severely impeding the rate of progress towards the vision of global artificial photosynthesis. Hopefully practitioners in this vitally important and rapidly expanding field will realize this predicament exists and will make every effort to improve the current situation.

On closing it is worth mentioning that unrecognized carbon contaminations of carbon dioxide reduction nano-structured photo-catalysts can have a disastrous affect on the work and lives of researchers and students who expect published work in the literature to be reliable and reproducible. My solar fuels group knows firsthand how much time, effort and money can be wasted pursuing promising leads published in top-rank, peer-reviewed journals that prove to be specious. Unfortunately such false positives can terribly mislead newcomers trying to enter the field with similarly devastating consequences.

It is instructive to recognize however that water splitting photo-catalysts have evolved from conversion rates of nanomoles to milimoles per gram of catalyst per hour within a decade, so there is no reason to believe carbon dioxide photo-catalysts cannot follow suit.