A unique combination of a columnar and multilayer structure was observed for an electrodeposit produced by dc plating in a single bath. 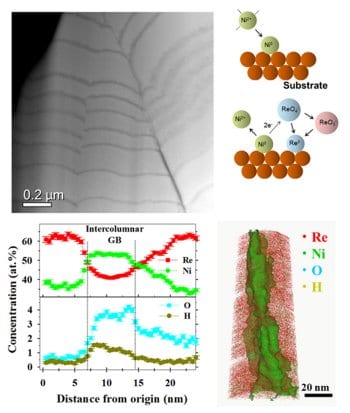 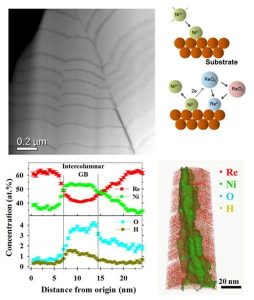 Rhenium (Re) is a refractory metal that possesses an exclusive combination of physical, mechanical and chemical properties. Consequently, Re and its alloys are considered high-performance engineering and coating materials in a diverse range of defense and civilian industries that include aircraft and aerospace, energy, nuclear, electrical, chemical production, and biomedical. Rhenium has the second highest melting point of all metals, the third highest Young’s modulus of elasticity, the fourth highest density, one of the highest strain hardening exponents, a low coefficient of friction, a high hardness, and superior tensile strength and creep-rupture strength over a wide temperature range compared to the other refractory metals. It is resistant to a wide range of harsh environments, does not possess a ductile-to-brittle transition at subzero temperatures, and does not form carbides while the wettability between rhenium and carbon is good and the solubility of carbon in rhenium is relatively high.

These properties imply that structures made of Re have excellent mechanical stability and rigidity, and they enable the design of parts with thin sections. It can also be concluded that Re is extremely attractive for high-temperature structural and energy system applications. In the aircraft industry, Re is used as a coating for face seal rotors, in air turbine starter components for gas turbine engines, as a diffusion barrier (e.g., on top of graphite), and as an alloying element in a Ni-Al-based superalloy for vanes and in a niobium-based alloy for advanced jet engines. Rhenium is also an attractive material for missile propulsion and space systems, e.g. in in nozzles for both solid and liquid rocket engines. NASA has reported the development of iridium-coated Re rocket chamber technology, allowing an increase in satellite life from 12 to 15 years, and gaining 30–60 M$ in the added revenue per satellite.

Rhenium suffers from two main limitations: (1) It has become one of the ten most expensive metals, and (2) its fabrication is time and energy intensive using current commercial methods. Chemical vapor deposition (CVD) has been the most commonly used coating technology. Near-room temperature electroplating using non-toxic aqueous bath chemistries has shown promise as an alternative to apply uniform Re and Re alloy coatings on complex shapes. Unfortunately, Re belongs to a group of metals that are difficult to produce by electrolysis of their aqueous solutions. The Eliaz & Gileadi research group at Tel-Aviv University, Israel, in a research funded by the US Air Force Office of Scientific Research and the Israel Department of Defense, has found that the addition of even very small amounts of iron-group metals (Ni, Fe and Co) to the plating bath catalyzes the electrodeposition of Re, increases significantly the current efficiency, and allows formation of good coatings with high Re content. It was proposed that the mechanism by which addition of nickel to the solution enhanced the rate of deposition of Re was through a unique type of electroless plating, in which the reducing agent was metallic Ni formed in situ.

Recently, the Eliaz & Gileadi research group has collaborated with the Seidman research group at Northwestern University, IL, and the Klie research group at the University of Illinois at Chicago, in characterizing the atomic-scale structure and atomic part-per-million (at. ppm) level three-dimensional (3D) chemistry of a Re–Ni binary alloy coating. Toward this goal, spherical aberration-corrected scanning transmission electron microscopy (STEM) and atom-probe tomography (APT) analyses were utilized. A unique combination of a columnar and multilayer structure was observed, for the first time, for an electrodeposit produced by dc plating in a single bath. The multilayers exhibited hetero-epitaxial growth behavior, which resulted in the development of very high residual shear stresses. These high stresses are most likely responsible for several observations, including formation of rough interfaces between the Ni-rich and Re-rich layers and mud-cracked outer layer. Alternating Re- and thinner Ni-rich layers support a mechanism in which nickel acts as a reducing agent, allowing the deposition of rhenium. This study calls for the development of alternative routes for high-quality electrodeposition of essentially pure rhenium coatings; thereby, modifying the structure of the coating material, reducing residual stresses and eliminating micro-cracking, which will be of paramount technological importance given the great interest in rhenium-based coatings for high-temperature, catalytic and other applications.