By synthesizing a hollow Pt/TiO2/CxNy-triazine nanocomposite, the low activity of TiO2 has been addressed. 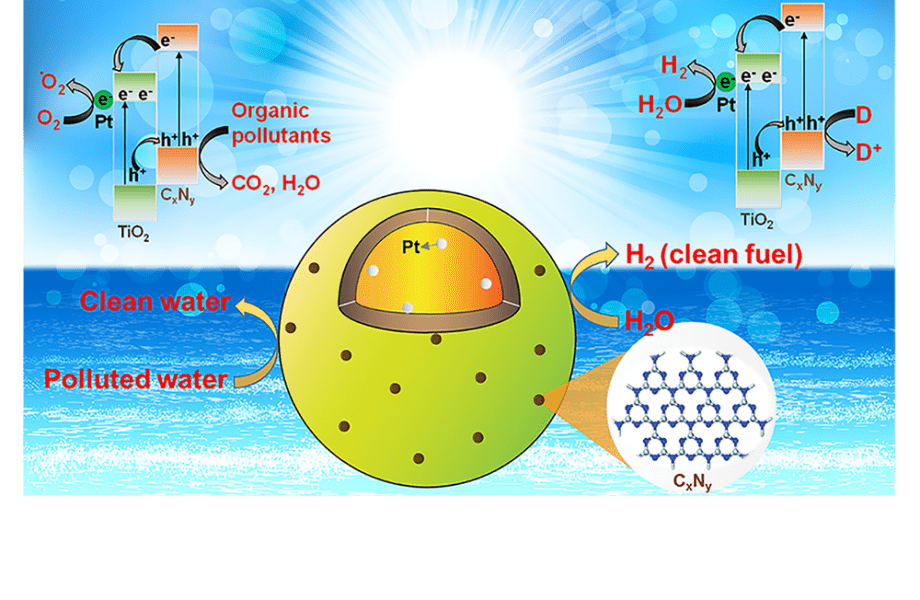 The utilization of solar energy is an attractive and sustainable solution for major global energy and environmental issues.

One of the promising approaches to solar energy production is using semiconductor-based photocatalysts, since their photogenerated electron–hole pairs can be used to either produce solar fuels or decompose organic pollutants.

Over the past decades, many semiconductors have been identiﬁed as potential photocatalysts and among these, TiO2 is considered as one of the most prominent examples. However, the low activity of TiO2, which stems from the fast recombination of the photo-excited electrons and holes and low specific surface area, limits its photocatalytic application.

In a recently published article in Solar-RRL, scientists addressed this challenge, by synthesizing a hollow Pt/TiO2/CxNy-triazine nanocomposite for the first time. This nanocomposite has two distinct co-catalysts,Pt and CxNy-triazine, which are located on the two opposite sides of TiO2 hollow spheres.

These co-catalysts act as active sites and attract the photo-excited electrons and holes, while suppressing the charge recombination. Moreover, in addition to enhancing the specific surface area, CxNy-based triazine co-catalyst improves the efficiency of the photo-catalysis for hydrogen production from water and for the decomposition of organic pollutants under solar light irradiation, in comparison to the commercial TiO2 (P25).

Collectively, these results make Pt/TiO2/CxNy-triazine nanocomposite one of the best TiO2-based photocatalysts to date.

Colloid transport through soil: Moving through “gaps” with “waves”
How do nanoplastics affect crop yield and nutrition?
One step closer to organic batteries
SF6 Worries – The Most Potent and Persistent Greenhouse Gas