Production of a CRP engine hood in just a few minutes 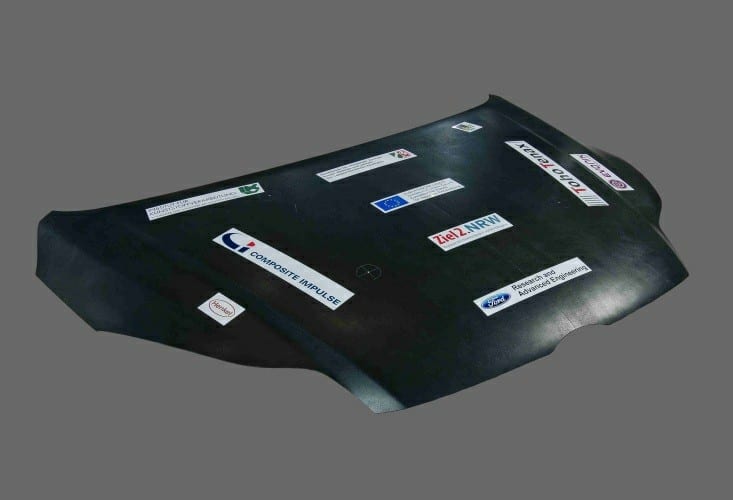 Together with the Institute of Automotive Engineering (ika) at RWTH Aachen University and a number of well-known industry partners, IKV has introduced a first prototype engine hood made of carbon fibre for the Ford Focus. Compared with a typical series-production steel hood, the CRP hood is around 60 percent lighter, weighing less than 5 kg.

The aim is to produce the CRP engine hood by the gap impregnation process and develop it to a stage where it is suitable for series production. In 2009, a gap impregnation unit was developed by IKV in conjunction with the firm Hille Engineering for the automatic short-cycle production of high-performance parts of fibre-reinforced plastics (FRP). Since then, IKV has been working continuously on extending the process. At present, high-quality parts measuring 50 x 50 cm² can be manufactured with integrated functional elements in less than five minutes. For the CRP engine hood for the Ford Focus, these findings have been transposed to dimensions of 105 x 158 cm². A time of less than 15 minutes has been calculated for the production.

Apart from the curved part and stiffening structures, the CRP engine hood also contains the fixing elements for assembly of the engine hood. In terms of the design, the mechanical properties (e.g. pedestrian protection), materials selection, service temperature and surface quality of the part played a key role. After determining the mechanical data from the previously selected resin and prepreg systems, ika designed the hood by simulation, focusing primarily on the aspects of stiffness and crash properties. The actual properties of the hood were then determined in crash and rigidity tests. The test results confirm the final geometry of the part.

Based on these test results, a special mould is being designed for the gap impregnation unit installed in the IKV laboratory, which should enable automatic part production in less than 15 minutes. Following the start-up of the mould, further research will be carried out at IKV on process optimisation with regard to process speed and surface quality of the finished part. Prototypes will be produced on the gap impregnation unit after it has been converted for engine hood production. These prototypes will then be subjected to special tests – for example, on head impact protection and temperature stresses – which are necessary to gain approval for series production.

Aside from IKV and ika, the industry partners involved in the joint project are the Ford Research Centre in Aachen, Composite Impulse, Toho Tenax Europe, Evonik Industries and Henkel. The project is financed by the German State of NRW as part of the Hightech.NRW project “Exterior body parts of CRP for large-volume production”. The aim is to conclude the project by September 2013 with the near-series, cycle time-optimised manufacture of the engine hood by the gap impregnation process.