The clock is ticking for the development and deployment of renewable synthetic fuels substituting for non-renewable fossil-based oil to enable a sustainable energy resource for the benefit of all people. 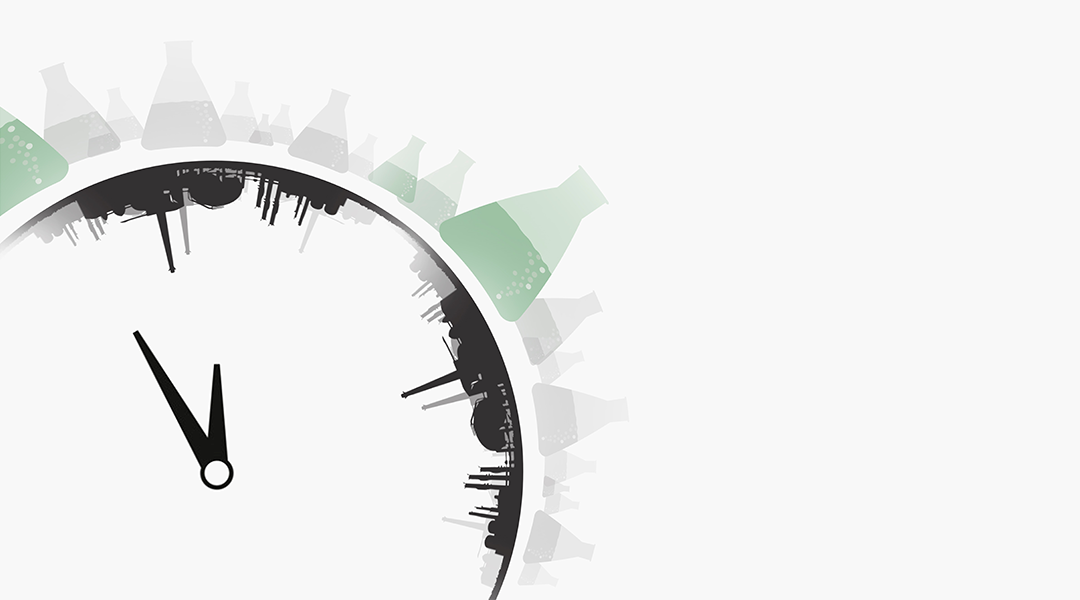 Parties to the Paris Agreement, virtually all countries, aim to hold the increase in the global average temperature to well below 2°C above pre-industrial levels and pursue efforts to limit the increase to 1.5°C. The Intergovernmental Panel on Climate Change (IPCC) recently completed an assessment of the scientific literature related to warming to 1.5°C.1 Since human activity has already increased the global mean temperature by 1°C this is a very challenging goal. A global imperative is to reduce CO2 emissions by about 45% by 2030 compared to 2010 levels and reach net-zero around mid-century. That will require rapid and extensive transitions of energy, transport, building and industrial systems to reduce fossil fuel use. Limiting warming to 1.5°C also requires increased CO2 removal by natural or anthropogenic means.

Renewable synthetic fuels could make a significant contribution to achieving the 1.5°C objective. They are common fuels such as hydrogen, methane, methanol, ammonia, gasoline, kerosene and diesel produced from biomass or CO2 and H2O feedstock’s, using renewable electricity or a combination of both. Renewable synthetic fuels could easily replace their fossil-fuel cousins thus facilitating the transition away from fossil fuels. The use of non-fossil or unavoidable fossil CO2 as a feedstock also contributes to meeting the objective. 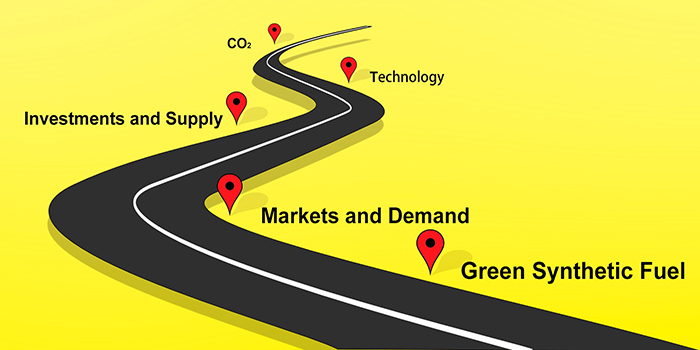 How do we produce CO2-based synthetic fuels on the scale required? This necessitates technologies to capture CO2 from emissions streams, ambient air, or the ocean, to generate H2 from water or a mixture of CO and H2 from CO2 and water, and to produce various hydrocarbon fuels from these feedstocks. Generation of renewable electricity would have to increase greatly to meet the present fuel demand and displace existing fossil-fired generation. A technological roadmap could help academia, industry, government and stakeholders plan the changes required to produce renewable synthetic fuels on the scale required to ameliorate the deleterious consequences of climate change, Figure 1.

Technological road mapping originated in the 1980s, with Motorola’s focus on the technologies required for continued product development. In the 1990s, this strategy became industry-pervasive, first applied to research and development activities in the US semiconductor industry (SEMATECH) before migrating to the energy sector (US DOE). Today, technological road mapping crosses academic, corporate and government lines, enabling product and process development through regional, national and global collaborations.

While not widely recognised, technologies for making renewable synthetic fuels are in an advanced state of readiness for manufacture and commercialization by a host of companies. These technologies and companies include direct CO2 capture from air, commercialized by Climeworks AG Switzerland, Carbon Engineering Canada and Skytree Netherlands. Electrolysers for generating H2 electrochemically from H2O are available from Siemens AG Germany, Hydrogenics Canada, Sunfire GmbH Germany and Proton On-Site USA. Syngas (consisting predominantly of H2 and CO) is accessible via the reverse water gas shift reaction of CO2 and H2, or by co-electrolysis of H2O and CO2 produced by Sunfire GmbH Germany. Last but not least, catalytic production of hydrocarbon fuels from CO2 and H2 or synthesis gas are provided by INERATEC GmbH Germany, Gensoric GmbH Germany, Velocys USA, Primus Green Energy USA and Carbon Engineering and Hydrogenics Canada, Figure 2. 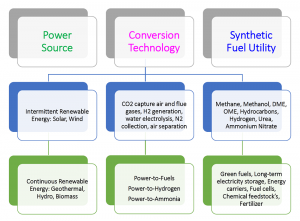 It is also worth mentioning that the direct conversion of solar radiation, CO2 and water into hydrocarbon fuels in the future may complement the indirect way of first generating power from photovoltaics or concentrated solar energy and then splitting water or CO2 by electrolysis. Focused solar fuels research is underway worldwide, for example at the Joint Center for Artificial Photosynthesis (JCAP) of the California Institute of Technology in Pasadena, CA, USA, the Helmholtz Center Berlin, Germany, and the University of Toronto, Canada. In addition, technology for direct solar thermal fuels is under development, for example at the Swiss Federal Institute of Technology (ETH) in Zürich, Switzerland, the German Aerospace Center (DLR) in Cologne, Germany, and the Weizman Institute of Science in Rechovot, Israel.

Renewable electricity generation, primarily wind and solar, is expanding rapidly around the world accounting for over half of all capacity additions in recent years.2 The costs of these technologies continues to fall, but their intermittent generation increases the need for storage and challenges the stability of voltage and frequency in the power grid. Battery performance and costs continue to improve, and large capacity batteries are now being added to electricity distribution systems to stabilise the grid and bridge temporary shortage. A complete transition to renewable electricity may take decades due to the long lives of existing fossil-fired generating units and the need for grid expansion, new grid topologies and electricity storage on a seasonal scale.

Clearly, large-scale production of renewable synthetic fuels will entail further development of several technologies, decisions on where to locate different facilities and infrastructure to transport the fuels to where they are needed. A proposed roadmap has recently been developed and is available online for the global community to appraise and debate, thanks to a heroic study by Frontier Economics at the commission of the World Energy Council Germany.3

Countries are not equally endowed with solar, wind, geothermal and hydrothermal forms of renewable energy. To surmount this obstacle, the roadmap envisions creation of a global renewable electricity to synthetic fuel (Power-to-X) market, involving trade of synthetic fuels and the technologies to produce them. Over time, this scenario will facilitate continued cost reductions in fuels and technologies, thereby helping to sustain the transition from fossil to renewable fuels.

The anticipated size of a Power-to-X global market should incentivise significant investments in synthetic fuels plants and infrastructure. By 2050, the energy demand for carbon-neutral fuels could reach 10,000 to 20,000 TWh/a, which is about 50% of the current global demand for crude oil. Ultimately, the market could approach USD $30T, the projected size of the global fossil energy market in 2100.

To implement the roadmap and realize the potential of renewable synthetic fuels the report recommends that governments:

A global renewable synthetic fuels roadmap and its implementation is a step in the right direction, allowing humanity to care for planet earth as seriously as humans look after their own health. Preventative care of our planet, would deliver long-term gains in the quality of life for all inhabitants of our planet. The cure will demand worldwide adherence to the roadmap, a guide to how we generate, transport, distribute, store and utilize power, transitioning from one mainly dependent on fossil fuels to one based on renewable synthetic fuels.

The clock is ticking for the development and deployment of renewable synthetic fuels substituting for non-renewable fossil-based oil to enable a sustainable energy resource for the benefit of all people, Figure 3.

1 Global Warming of 1.5 °C: An IPCC special report on the impacts of global warming of 1.5 °C above pre-industrial levels and related global greenhouse gas emission pathways, in the context of strengthening the global response to the threat of climate change, sustainable development, and efforts to eradicate poverty. http://www.ipcc.ch/report/sr15/

4 In 2009 the G20 countries pledged to phase-out inefficient fossil fuel subsidies. In 2015, the subsidies amounted to USD $373B. IEA and OECD, Update on Recent Progress in Reform of Inefficient Fossil Fuel Subsidies that Encourage Wasteful Consumption, http://www.oecd.org/site/tadffss/publication/. Carbon prices cover 15% to 20% of global greenhouse gas emissions but in many jurisdictions the price is less than USD 10/tCO2e. World Bank Group, State and Trends of Carbon Pricing 2018, https://openknowledge.worldbank.org/handle/10986/29687.

A Walking, Grasping, Four-Legged Robot
A Catalyst for Sustainable Methanol
Extending the Range of Electric Cars with Invisible Solar Panels
Your brain: Built by cilia