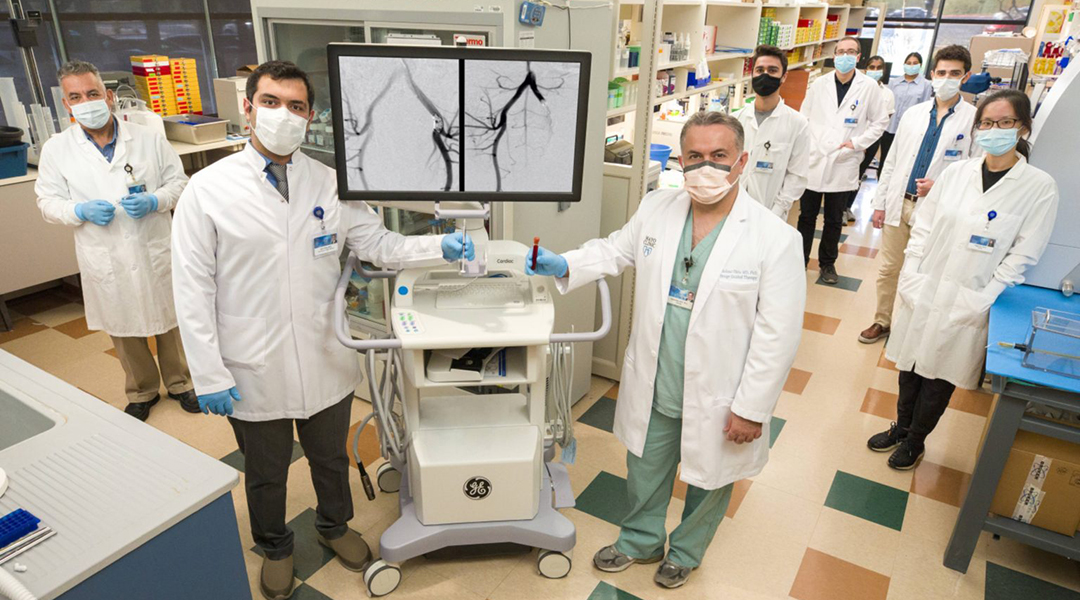 Uncontrolled bleeding is an emergency for patients taking drugs that prevent their blood from clotting. For some, standard interventions work, such as inserting metal coils above the area that’s bleeding. For others, the situation is more complicated.

“I see them in the clinic. I meet the family,” says Dr. Rahmi Oklu, a Mayo Clinic vascular and interventional radiologist. “We can’t help everyone, and I think about it a lot.” Oklu is the director of the Minimally Invasive Therapeutics Laboratory, which is a state-of-the-art translational bioengineering laboratory at Mayo Clinic in Arizona.

But Oklu and his team did more than think about it. They are working to improve current treatments, which are broadly referred to as embolization.

The team’s efforts could translate into a host of benefits for patients in the future. One example is a new category of embolic gel made from blood itself. In a recent paper published in Advanced Materials, Oklu and his team showcased these new gels, which not only block bleeding, but also support healing in the damaged area.

A new way to stop bleeding

In a series of cell and animal studies, the authors introduced these blood-derived embolic materials. Using fresh blood, the researchers extracted platelet-rich fibrin, a part of blood that is vital for wound healing. After minutes of processing, the yellowish, gel-like material called platelet-rich fibrin is collected. Fibrin forms the scaffold of the platelet-rich gel and contains the chemical signals that help regenerate the tissue.

“We collected this fraction from fresh blood, using one part of the sample immediately and freeze drying the other part,” said Oklu.

The researchers checked both versions for any degradation of the material after freeze-drying and found they were similar in activity for most growth factors. But a frozen powder or the fibrin fraction, alone, can’t block bleeding.

They needed to make the material just liquid enough to inject, but then solid once it was placed in the part of the body where bleeding was occurring. A material that fits those characteristics is called a “shear-thinning biomaterial.”

To achieve this shear-thinning characteristic, the team added nanosized particles. They also added a contrast agent so the material can be seen as it is injected. They determined that the new gel could withstand about 12 times more pressure than normal systolic blood pressure inside the artery.

“This suggests that the gel will stay in place until it is purposely removed,” said Oklu, noting that the body’s inflammatory system breaks down the gel over time, filling the blocked area with scar tissue and permanently blocking the artery. “And most importantly, it doesn’t require the patient’s blood to be able to clot in order to stop the bleeding.”

The researchers combined specialized knowledge of what clinicians need with lab-based solutions from discovery work through translation into humans and into clinical studies. The team of clinicians and scientists in the lab identified common problems with current embolic materials, including reliance on blood clotting, inability to see the injection in real time during the procedure , reliance on a specialized catheter, inability to remove the block if needed, and cost. They have worked through numerous prototypes to solve these problems.

“Our lab has started the journey to identify the next generation of embolic materials, and we think that these blood-derived embolic materials represent a serious advance,” said Oklu. “We plan to continue investigating these gels in longer experiments and to optimize the formula. Our goal is of course to take these materials through clinical trials and then into practice.”

Real progress made this year in the fight against malaria
Climate Change Will Require Heavy Lifting
Growing nerve cells: The longer the cell, the better the model
What is the carbon footprint of carbon capture and utilization?