How Polymers Can Heal Wounds

For the first time n-BG particles are used to investigate their haemostatic efficacy in wound healing applications. 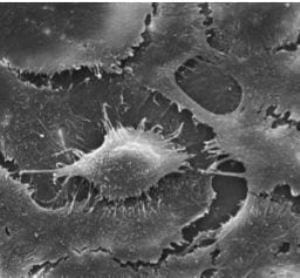 There is a general need for the development of new materials that can be applied by first-aid responders to prevent lethal amounts of blood loss from traumatically injured individuals and promote skin tissue regeneration. Consequently, the US military has expended great effort to develop rapid-acting haemostatic agents. The leading agent is a zeolite based composite that can be poured onto a wound to stabilize a victim who might otherwise bleed to death. This material has a high affinity for water; therefore it has a concentrating effect on the plasma by selectively dehydrating the blood. However, as a consequence of this affinity for water, energy release is very high during hydration, causing a tendency to burn the surrounding healthy tissues.

As a result, efforts have now been focused on developing new biocompatible materials to serve as scaffolds with an ability to induce haemostasis, as well as promoting tissue regeneration. Bioactive glass has been identified as a rapid-acting haemostatic agent that demonstrates clotting activity comparable to the zeolite-based haemostatic agent, currently used by US soldiers, but without the negative thermal side effect that tended to burn healthy tissue during application.

A recent article published in Polymer International suggests that this is the first time that P(3HB)/nanoscale bioactive glass (n-BG) composite microspheres compressed to form films have been used for applications in wound healing. For the first time, n-BG particles have been used to investigate their haemostatic efficacy in wound healing applications, due to their high surface area which could provide the support needed for thrombosis, as well as the release of an optimal ratio of SiO2 to Ca2+ ions required for the clotting cascade. Additionally, these composite films were immersed in simulated body fluid (SBF) for a fixed time period in order to induce the formation of hydroxyapatite (HA) on the surface of the composite films, leading to the formation of P(3HB)/n-BG surface functionalized composite films. These composite films were also assessed in order to understand the effect of HA deposition on the biomaterial’s surface properties, on protein adsorption as well as on keratinocyte and viability.

Upon achieving the formation of HA, the composite patch would be implanted in vivo by placement onto the wound bed as a dermal graft. Polymers are known to be more conducive to dermal tissue regeneration via chemical signals or biological signals which induce dermal regeneration and repair. Thus these novel scaffolds would be used to induce cell attachment and haemostasis, as well as to provide mechanical support to promote tissue regeneration.