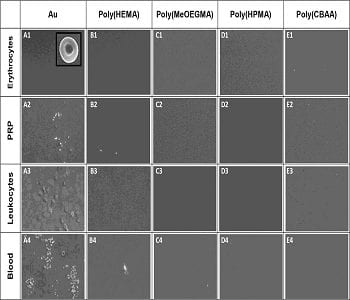 Researchers from Germany and the Czech Republic have shown that the surface modification of polymer brushes reduces fouling and adhesion of whole blood, blood plasma or blood cells.

A major problem of all artificial/synthetic medical devices incorporated to the human bloodstream such as catheters, stents, vascular grafts, heart valves, artificial kidneys is that they can contribute to serious post implantation health problems. Blood, with its soluble proteins, interacts with the surface of the devices and produces fouling. This fouling can cause thromboembolic complications, which can finally result in lethal complications. Therefore designing coatings with anti-fouling properties on artificial medical devises is a major aim in research. The focus to prevent fouling is nowadays on polymer brushes instead of ultra-thin polymer coatings. The researchers grew four different well-defined ultra-thin polymer brushes on a gold surface. These substrates coated with different polymer brushes were than tested for resistance to fouling. Therefore, the surface was in contact with different blood cells, platelet rich plasma, and with whole blood. 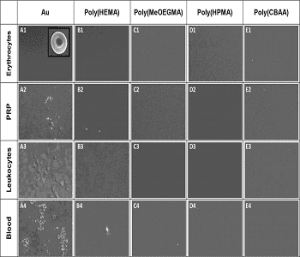 A scanning electron micrograph of polymer coatings based of poly(HEMA), poly(MeOEGMA), poly(HPMA), and poly(CBAA) exposed to citrated human blood and blood components – erythrocytes, PRP, and leukocytes. Gold surface was utilized as a reference hydrophobic substrate. 120 × 100 μm2.

Rodriguez-Emmenegger and co-workers showed that all polymer brushes increased the wettability of the surface. Wettability is thought to be one sign of fouling resistance. However, a high wettability doesn’t necessarily correlate to full prevention of fouling from complex biological samples. The morphology of the surface also influences the fouling, and high roughness and pinholes increase the fouling. They showed that their well-defined polymer brushes have a smooth surface without pinholes. The irreversible non-specific adsorption has been determined with model solutions of human serum albumin, fibrinogen, and undiluted human blood plasma. All four brushes fully prevent the fouling. Finally the researchers analyzed fouling with blood components and whole blood. They found that all four polymer brushes prevented the adsorption of erythrocytes and leucocytes and reduced the adsorption of platelets and blood.  One polymer brush (poly(HPMA)) is the most promising candidate for blood contacting devices as it showed no fouling of blood cells and less than 0.25% surface coverage of cellular components from blood. 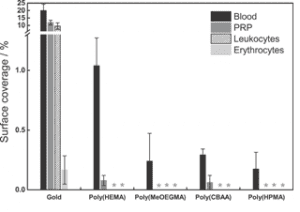 Fouling from blood components; PRP, leukocytes, and erythrocytes as well as blood on gold and polymer brushes.