How does Pluto's "beating heart" determine wind patterns on its surface? 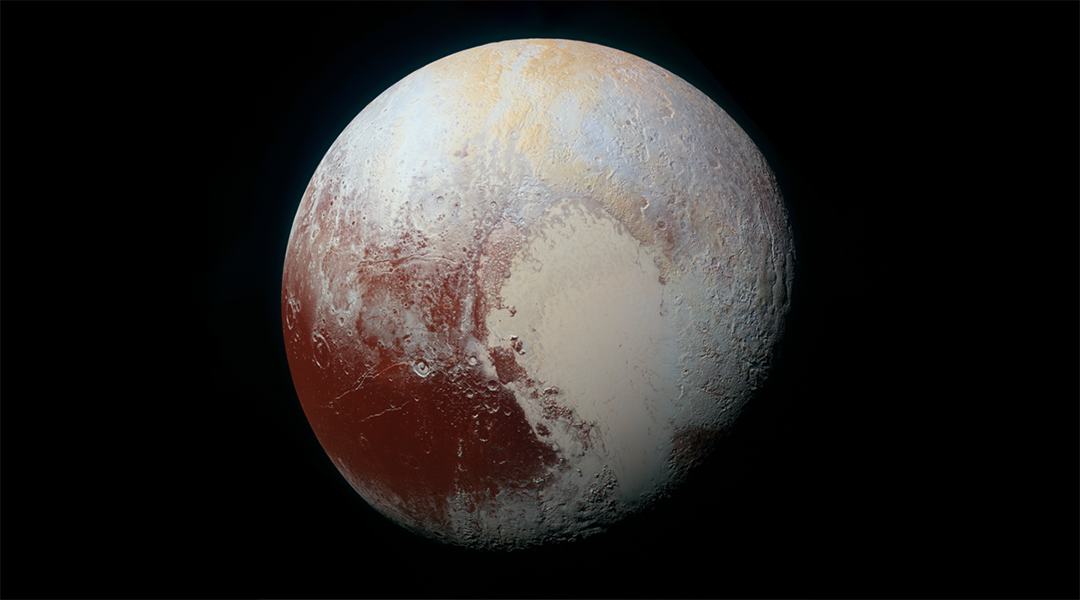 According to a new study from NASA, Pluto’s famous “beating heart” — the iconic Tombaugh Regio captured by the New Horizons mission during a flyby in 2015 — plays an important role in controlling the dwarf planet’s winds, which give rise to a number of surface features.

The Tombaugh Regio was named after Clybe Tombaugh, the astronomer who discovered Pluto in 1930, and contains a multi-kilometer-thick, nitrogen-rich ice sheet, which covers the floor of the Sputnik Planitia basin — a three kilometer deep basin and the Tombaugh Regio’s left “lobe.” Most of the dwarf planet’s nitrogen content is contained within this basin, along with small amounts of carbon dioxide and methane, as a result of its low elevation. The heart’s right “lobe” is comprised of highlands and nitrogen-rich glaciers that extend into the basin.

Now, research published in AGU’s Journal of Geophysical Research: Planet suggests that the warming and melting of nitrogen ice during the day and subsequent re-freezing of this layer at night acts as a heartbeat, which pumps nitrogen winds around the dwarf planet.

Using data gathered during the 2015 flyby, the team behind the paper modeled Pluto’s surface topography to determine how its atmosphere might be shaping surface features. They were able to model this nitrogen cycle using a weather forecast model to monitor how winds moved across Pluto’s surface.

According to the study, nitrogen vaporizes in the north of the Tombaugh Regio and then solidifies to ice in the south, triggering westward winds approximately 4 kilometers above the surface. This cycle causes Pluto’s atmosphere to circulate opposite to its eastern spin — a phenomenon commonly referred to retro-rotation. This type of atmosphere has not been observed anywhere else in our solar system, except perhaps Neptune’s moon Triton, explained the researchers.

This movement of air close to the surface transports heat, grains of ice, and other particles that create dark streaks across Pluto’s surface.

“This highlights the fact that Pluto’s atmosphere and winds — even if the density of the atmosphere is very low — can impact the surface,” said astrophysicist and planetary scientist at NASA’s Ames Research Center in California and the study’s lead author, Tanguy Bertrand, in a press release.

“Before New Horizons, everyone thought Pluto was going to be a netball – completely flat, almost no diversity,” Bertrand said. “But it’s completely different. It has a lot of different landscapes and we are trying to understand what’s going on there.”

The researchers speculate in their study that characteristic surface features such as dark plains and wind streaks to the west of Sputnik Planitia could be the result of winds generated by Pluto’s beating heart, which could transport heat or erode and darken the ice through particle deposits.

By determining these patterns, scientists can compare them to phenomena we observe on Earth and learn more about celestial bodies in our solar system. It’s impressive the ability with which researchers can discover or glean regional weather patterns on a planet almost six billion kilometers away.

“Pluto has some mystery for everybody,” said Bertrand.

Genetic diversity can help coral reefs fight climate change
The right materials are essential to the design of future fusion reactors
Why is potassium the cation of life?
Largest known comet from Oort Cloud captured by Hubble