New research has proposed a plasma-assisted route to Fe2O3-Co3O4 nanomaterials for use as PEC water splitting anodes. 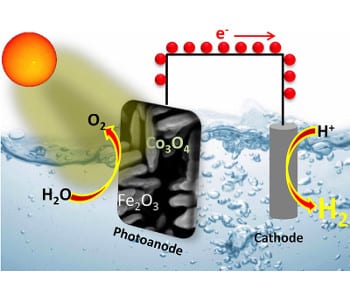 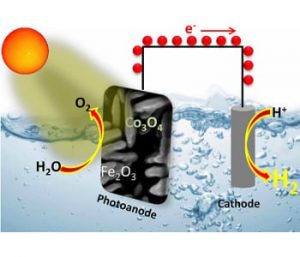 The conversion of solar energy into hydrogen via photoelectrochemical water splitting is a strategic area for sustainable energy production in a carbon-neutral fashion, enabling a possible solution to increasing global energy demand. Among the various materials investigated as photoanodes, Fe2O3 possesses various appealing features, such as abundance, non-toxicity, low cost and chemical stability. Nevertheless, its limited photoefficiency has stimulated several efforts towards improved performances. In this regard, Fe2O3 functionalization with cobalt-based catalysts offers a viable alternative, but the studies on Fe2O3 modification by Co3O4 are so far rather limited.

Now, new research has proposed a plasma-assisted route to Fe2O3-Co3O4 nanomaterials. Fe2O3 nanodeposits were grown by plasma enhanced-chemical vapor deposition on conductive substrates, and functionalized with Co3O4 through cobalt sputtering and eventual thermal treatment in air. The results highlight the formation of high purity Fe2O3-Co3O4 systems, in which Co3O4 amount can be conveniently tuned by variations of the sole deposition time. On the other hand, annealing remarkably influences Co3O4 dispersion and in-depth distribution. These variations positively affect PEC performances in solar water oxidation, resulting in a remarkable photocurrent increase and a lowered onset potential thanks to the catalytic role played by Co3O4 functionalization. The researchers claim that, to their knowledge, this represents the first example of Fe2O3-Co3O4 photoanodes produced by a hybrid PE-CVD + sputtering approach. This strategy can also be extended to other nanostructured electrodes, creating new opportunities for designing a wide range of PEC anode materials for solar energy conversion and storage.