New observations allowed astronomers to see, for the first time, the shadow of GW Orionis' inner ring, which helped them figure out its 3D orientation. 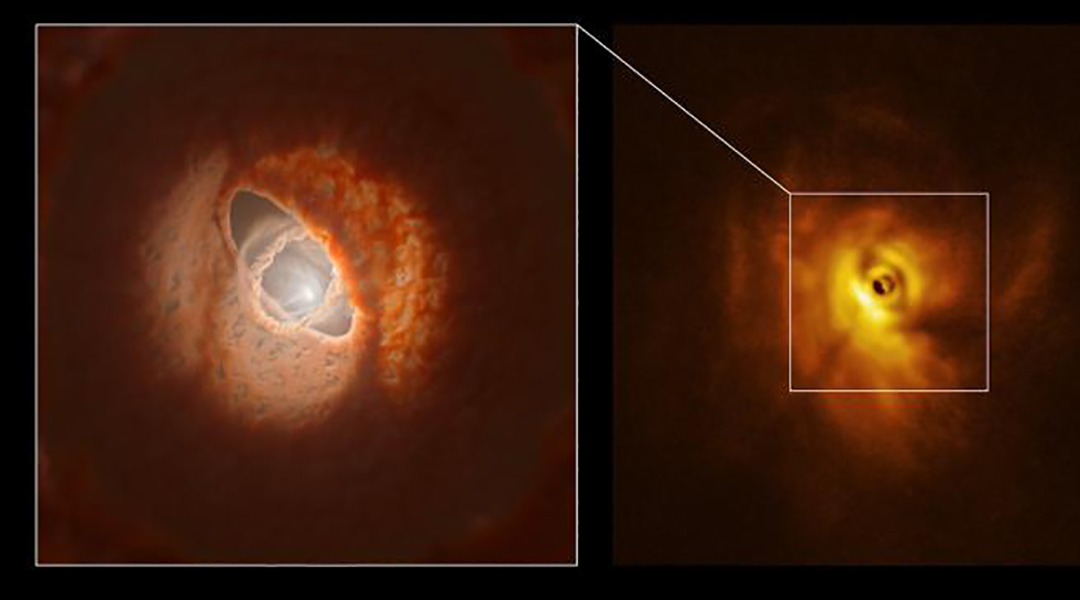 New data collected using the European Southern Observatory’s Very Large Telescope (ESO’s VLT) and the Atacama Large Millimeter/submillimeter Array (ALMA) have identified a planet-forming disk that is being pulled apart by three nearby stars, leaving it with warped and tilted rings. The system, referred to as GW Orionis, is located approximately 1300 light-years away in the constellation of Orion.

“Our images reveal an extreme case where the disc is not flat at all, but is warped and has a misaligned ring that has broken away from the disc,” said Stefan Kraus, a professor of astrophysics at the University of Exeter. “The misaligned ring is located in the inner part of the disc, close to the three stars.”

The misaligned rings were first observed in GW Orionis in 2017 by Jiaqing Bi of the University of Victoria, Canada. These results were published earlier this year in the journal The Astrophysical Journal Letters.

These types of rings are not observed in our own Solar System, where planets orbit the Sun in the same plain. The results of Kraus and his team’s findings were recently published in the journal Science and involved an international team of researchers and 11 years of observation using a number of telescopes to study the system and map the stars’ orbits. “We found that the three stars do not orbit in the same plane, but their orbits are misaligned with respect to each other and with respect to the disc,” says Alison Young of the Universities of Exeter and Leicester and a member of the team.

“This proved crucial to understand how the stars shape the disk,” added team member John Monnier of the University of Michigan.

A breakthrough came after using the VLT’s SPHERE instrument, which ESO dubs a “powerful planet finder”. SPHERE uses a method known as direct imaging to capture images of exoplanets as well as images of dust and debris around stars, much like taking a photograph. This is a challenging task as planets, being small and dim compared to nearby stars, get lost in the cosmic glare.

To get a direct image, the trick is to filter out this stellar glare to get a clearer view of the surrounding area, much like a pair of sunglasses. Light emitted by stars is unpolarized, meaning the electromagnetic waves it emits oscillate in random directions. However, when light is reflected off a surface, such as a planet, the reflected waves become partially organized or polarized. SPHERE is built to block the polarized light reflected from nearby surfaces (planets, dust and debris), resulting in a clear view with reduced glare.

Using SPHERE, the research team was able to image the planet-forming disk’s inner ring and confirm its misalignment through the first images of its shadow. “In our images, we see the shadow of the inner ring on the outer disk,” said Kraus. “At the same time, ALMA allowed us to measure the precise shape of the ring that casts the shadow. Combining this information allows us to derive the 3-dimensional orientation of the misaligned ring and of the warped disk surface.”

Through computer simulations, the team was able to rationalize the ring misalignments with what they call the theoretical “disc-tearing effect”, which proposes that the dueling gravitational pulls of the three stars pulls the disks into different planes and can cause them to break.

According to Bi, the presence of a planet between these rings is also needed to explain why the disc tore apart. “This planet has likely carved a dust gap and broken the disk at the location of the current inner and outer rings,” she added.

Klaus and his team speculate that “the inner ring contains enough dust to build 30 Earths, which is sufficient for a planet to form in the ring.” Future studies will aim to identify the planet, which could still be forming, and would be the first to exist in a three star system.

"Seven minutes of terror": The Perseverance rover's descent to Mars
Pioneers in Science: Cecilia Payne-Gaposchkin
The curious case of a star-forming ring in the NGC 3182 galaxy
Supermassive black holes on a collision course