In honor of the UN's International Day of Women in Science, this week we highlight Katherine Johnson, pioneering mathematician and NASA legend. 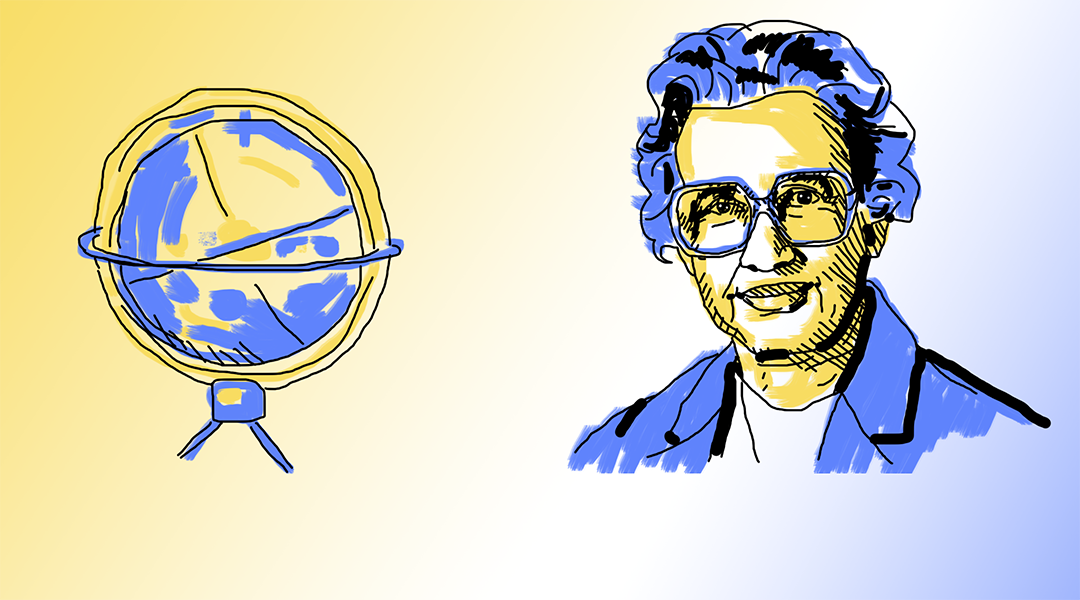 Katherine Johnson (also known as Katherine Goble) is a retired NASA mathematician and pioneer not only in the field of physics and mathematics, but in the quest for gender and racial equality. She was one of NASA’s “human computers” whose calculations helped send American astronauts into orbit in the 1960s and the moon in 1969.

Born in White Sulfur Springs, West Virginia in 1918, Johnson’s early years were challenged by the limited education opportunities available to African Americans. She was a gifted student with a knack for numbers and completed the eighth grade by age ten — four years earlier than her classmates.

In 1939, when West Virginia College became an integrated school, she was hand-picked along with two other male students to be the first African American students to enroll in the university’s graduate program, studying mathematics. This in itself is a trail blazing, once in a lifetime accomplishment, but Johnson was only getting started.

After her first session, she decided to leave school to start a family with her husband, eventually returning to teaching public school students. Some biographical sources indicate that the environment at West Virginia University was less welcoming, and she found it difficult to continue with her studies as a research mathematician.

It wasn’t until 1953 that she joined the National Advisory Committee for Aeronautics (NACA) Langley laboratory, which would later become the National Aeronautics and Space Administration (NASA). The Langley office was still segregated at the time, and Johnson therefore worked as a computer in the West Computing section, which was headed by Dorothy Vaughan — fellow trail blazer, mathematician, and computer programmer who became NASA’s first African American supervisor in 1949.

The West computing section was comprised of a group of African American women who manually carried out complex mathematical calculations and data analysis for NASA’s various teams. After two weeks, Johnson left the pool of computers to join the flight research division where she analyzed data from flight tests.

The launch of the Soviet satellite Sputnik 1 in 1957 made history and the United States hurried to catch up. But this would take some time, as their Cold War rivals achieved another space “first” in April of 1961, when the Soviet cosmonaut Yuri Gagarin became the first human to travel to space, completing one orbit of the Earth in the Vostok 1 capsule; another significant milestone in the Space Race.

In 1958, after NACA was reformulated into NASA, the Space Task group was formed with the goal of also getting a human into space. Johnson transitioned onto this project, co-authoring a report in 1960 titled “Determination of Azimuth Angle at Burnout for Placing a Satellite Over a Selected Earth Position“, along with Ted Skopinski, in which they outlined the math required for orbital spaceflight and in which the landing position of the spacecraft is specified — the first report from the Flight Research Division in which a female was given credit.

In 1961, she calculated the path for Freedom 7, the spacecraft that carried the first American astronaut, Alan B. Shepard, Jr. into space, and the following year she verified computer calculations for the Friendship 7 mission in which John Glenn became the first U.S. astronaut to orbit the planet. Johnson also completed the same calculations as well as backup navigational charts for the astronauts in case of electronic failure for Apollo 11, which sent three men to the Moon.

These ended up being instrumental during the Apollo 13 mission, the third lunar landing attempt which took place in 1970. Two days in, the mission was aborted when a secondary oxygen tank blew up, causing the main oxygen tank to fail. As oxygen began to run out, ground controllers in Houston were faced with a formidable task: how to get the astronauts home. Using Johnson’s earlier research on backup parameters and navigational charts, Houston was able to compute the correct trajectories which enabled the crew to safely return to Earth.

She later worked on the Space Shuttle program, Earth Resources Satellite, and even contributed to plans for a Mars mission. After 33 years, she retired from NASA in 1986.

Johnson has received a number of awards and honorary degrees for her pioneering work, including five NASA Langley Research Center Special Achievement awards. In 2015, at age 97, former US President Barack Obama awarded her the Presidential Medal of Freedom, America’s highest civilian honor, and in September 2017, she was honored by NASA with the dedication of a new research building named after her.

In 2016, the book and subsequent movie “Hidden Figures” highlighted Johnson’s story and those of her colleagues in the West Computing section, bringing recognition of her achievements to the wider public. She attended the 2017 Oscars when the movie was nominated, escorted to the stage by NASA astronaut Yvonne Cagle and received a standing ovation.

It is not only her scientific achievements that make Johnson a pioneer, but the fact that she was able to accomplish so much during a time when gender and racial biases presented seemingly insurmountable obstacles.

“You are as good as anyone in this town, but you are no better than any of them.”

No longer just solar sharing: Bringing agrivoltaics to the next level
How virtual reality causes (and cures) fear
Exploring the ​“dark side” of a single-crystal complex oxide thin film
Water on the moon might be more abundant than previously thought