The existence of a quantum membrane is predicted by some theories of gravity, and scientists might be one step closer to identifying one. 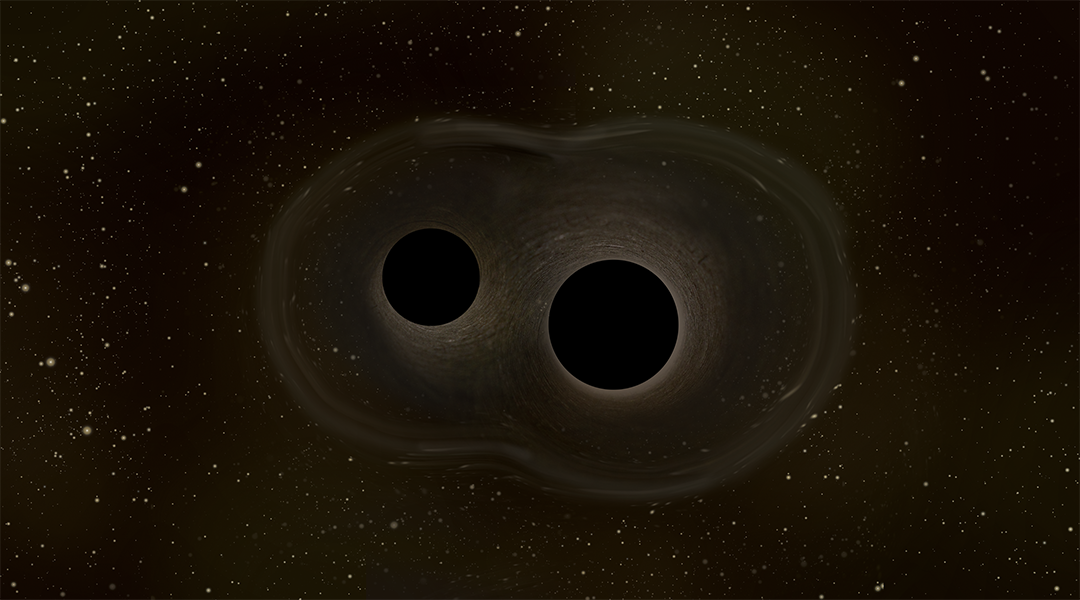 An international team of physicists has analyzed the structure of a gravitational wave emitted by two merging black holes and have identified a long sought-after phenomenon: a quantum membrane, also known as the stretched horizon, that exists just outside the event horizon, and whose existence presumably affects the behavior of gravitational and non-gravitational fields in the vicinity of a black hole.

The existence of such a membrane is predicted by some theories of quantum gravity, a field of theoretical physics that seeks to describe gravity using the principles of quantum mechanics.

The unification of quantum mechanics and general relativity — the geometric theory of gravity — has been a holy grail for physicists for nearly a century, and a number of theories for quantum gravity have been proposed. Such a unification is necessary for understanding what happened in our universe at the first instants of its existence, and how to resolve an infinite-density singularity at the centers of black holes.

Experimental verification is extremely complicated because there is almost no way to study it in a lab. The typical energy scale at which the quantum gravity effects become important is many orders of magnitude higher than the energy of particles that can be achieved in colliders. That is why it is very important to find another way to study quantum gravity.

The physical systems whose behavior is most likely to be largely affected by quantum gravity are black holes — even purely theoretical studies of these objects have led to significant progress in the development of the subject. The classical general relativistic description of black holes involves the event horizon: a spherical surface that covers the spacetime singularity. No signal from the black hole interior can cross the horizon and reach a distant observer, because the black hole gravity is so strong there that even light can’t escape it.

An expected distance between a black hole’s event horizon and a quantum membrane is of order of the Planck length, a typical length scale of quantum gravity, which is as much less than the size of an atom as the latter is less than the radius of the Earth’s orbit. Theorists expect that at such tiny distances, our current understanding of spacetime as a smooth entity breaks down, and a complete theory of quantum gravity is needed to quantitatively describe what happens there.

If the quantum membrane exists, a phenomenon called a gravitational echo should take place. A black hole is surrounded by a barrier where the shape of the black hole’s gravitational field is such that it prevents anything, including the gravitational waves — ripples in the fabric of spacetime — from escaping the vicinity of the horizon.

Due to quantum effects, a gravitational wave can partially pass through this barrier while also being partially reflected back into the black hole. But if there exists a stretched horizon just outside of the event horizon, the falling gravitational wave gets reflected a second time , and can pass through the barrier. The time interval between these “echoes” of the same wave is expected to be in the order of a second, but exact value depends on the size of a black hole and the precise structure of the membrane, which differs depending on the theory of quantum gravity.

One way to investigate the stretched horizon structure is to study very powerful gravitational waves, which get generated when two black holes inspiral each other and merge into one. In the final milliseconds of this process, a few percent of the total mass of the black holes get released as gravitational waves. The power of this gravitational radiation sometimes exceeds the combined power of all light waves radiated by all the stars in the observable universe. At the first moments of its life, the newly formed black hole settles down to a stable form by oscillating and emitting more gravitational waves, with this stage of merging called “ringdown”.

Gravitational waves of this origin can be detected by gravitational observatories, the most famous of which are American LIGO and European Virgo, located in Italy. So far, scientists have found almost 50 black hole merger events with these two detectors.

In order to experimentally study the structure of the quantum membrane, the team of physicists analyzed one of these events called GW19052 —  the most massive pair of merging black holes observed to date. In this event, the total energy of the emitted gravitational waves was equal to around nine masses of our Sun, leading to exceptionally loud ringdown.

This is the most accurate study of energy and waveform of the post-merger gravitational wave echo to date. Physicists hope that the next generation of gravitational wave detectors will allow not only to detect the membrane but also to investigate its structure in greater details, which will hopefully allow them to draw a definitive conclusion on the correct theory of quantum gravity.