Supramolecules based on the flat-on P3HT chains and grafted rGO nanosheets in the P3HT:PCBM active layers have shown improved performance as photovoltaic devices. 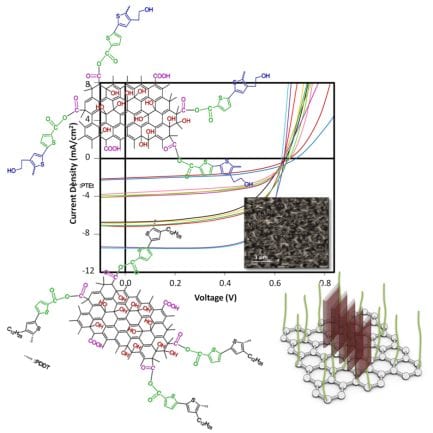 A designed donor-acceptor polymer plays an important role in a high-performing photovoltaic system. So far, the best performing solar cells contain poly(3-hexylthiophene) and phenyl-C-butyric acid methyl ester (P3HT:PCBM). Unfortunately, it is difficult to optimize the PCBM structure for solution processing.

Graphene has been widely utilized in PSCs to increase transparency, conductivity, chemical stability and flexibility. In addition, chemically modified graphene oxide (GO) has been used for designing electron acceptors for PSCs. Alternatively, rGO has been introduced to induce formation of P3HT nanofibers. Grafting the organic/polymeric moieties onto the surface of rGO preserves its electronic structure instead of altering its structural integrity. Therefore, rGO is a promising candidate as an electron acceptor when developing organic photovoltaic cells.

Dr. Agbolaghi and co-authors synthesized three kinds of rGO nanosheets that were functionalized with 2-thiophene acetic acid (rGO-f-TAA), grafted with poly(3-dodecylthiophene) (rGO-g-PDDT), and poly(3-thiophene ethanol) (rGO-g-PTEt).  They investigated the effects of face-on, edge-on, and flat-on orientations on the characteristics of photovoltaic devices. Three different orientations, including face-on on bare rGO, edge-on on functionalized rGO, and flat-on on grafted rGO were detected in toluene. The best-performing organic electronics were resulted from using the supramolecules based on the flat-on P3HT chains and grafted rGO nanosheets in the P3HT:PCBM active layers. The synthesized materials could be used with, or without donor – acceptor components in the active layers of photovoltaic devices.