How will the emerging field of photothermal materials applied to solar powered water desalination develop in the years ahead? 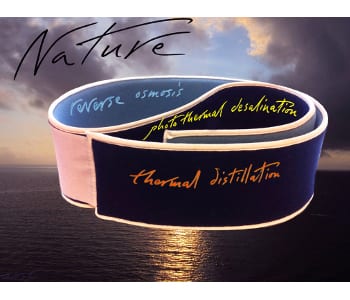 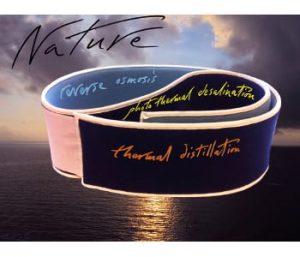 Water, water, every where,

Nor any drop to drink

Rime of the Ancient Mariner

Every continent is already experiencing freshwater shortages driven by population growth, global warming and environmental pollution. The number of people without access to a clean and secure freshwater supply is estimated to be about 1.8 billion, one quarter of the world’s population. Another 1.6 billion people live in countries where the necessary infrastructure to take water from rivers and aquifers is lacking. Desalination of seawater and brackish water seems to be the only feasible way to increase the supply and solve these problems.

Today, the installed base of desalination plants around the world has a capacity of 19.8 billion US Gallons. The global market demand for water desalination products and services is estimated to be $13.4B in 2015. Globally more than 17,000 desalination plants in 150 countries provide some freshwater to around 300 million people with capacity growing about 8 percent annually [1]. Out of necessity, countries in the Middle East have dominated the desalination market. However the specter of freshwater shortages are increasing around the world and many countries have opted to install desalination facilities [2]. These desalination processes are energy intensive and costly. They are powered mainly by electricity generated from fossil fuels with its associated adverse climate change and environmental consequences.

Desalination by membrane-based reverse osmosis (RO) and thermal distillation (TD) are the two most practiced approaches for producing pure water from seawater and brackish water today. Solar and wind powered versions of these desalination methods avoid some of the problems inherent in the use of fossil fuels. Interestingly, the use of these intermittent renewable forms of generated electricity for powering RO or TD can be considered to be a means of electricity storage and reduction of peak demand. Direct absorption of heat from the sun can also be used for driving TD, however in this case bulk water is involved in the evaporative desalination process yet evaporation is a surface physicochemical phenomenon.

Another thought-provoking means of reducing the energy, environmental and economic costs of solar powered TD would be to devise a means of locally concentrating light absorption and heat generation from the sun to just the interface between air and water, where the surface free energy and evaporation rate of the water is highest. 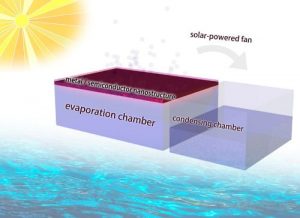 One way of achieving surface localized solar concentration to enable thermal evaporation of water and desalination is by exploiting the photothermal effect. This can be accomplished using a broad-band, highly absorbing, porous, thin hydrophobic membrane that floats on the surface of the water, as shown in the illustration. The conversion of solar photons to heat in the photothermal membrane causes local heating at the air-water interface. This in turn causes evaporation of the water through the pores of the membrane whereupon it can be condensed in a cooler region of the desalination system. The challenge is the design of the photothermal material and architecture of the porous membrane and their integration. The design needs to optimize the light-to-heat-to-freshwater conversion efficiency as well as to maximize the long-term chemical, photochemical and mechanical stability of the composite membrane exposed to the harsh sunlight and salty water conditions.

It is interesting that solar thermal water heating systems utilized today for domestic and industry use have a long history that can be traced back to Archimedes in 214 BC, who used mirrors to heat water. Presently, black materials are used to absorb solar radiation, convert it to heat and transfer it to heat water in systems with different designs, architectures and uses. The absorbing materials in the solar collectors can be black paint, metal and semiconductor blacks that include copper, aluminum, steel and silicon, often with different kinds of textured surfaces to optimize the absorption of sunlight.

In the context of surface texturing and the photothermal effect, illumination of nanostructures at wavelengths corresponding to high optical absorption can turn them into nanoscale local sources of heat via the photothermal effect, whereby light through Joule resistive losses is transformed to heat. The most well studied systems are nanostructured metals that display conduction electron resonances at optical wavelengths, called plasmons, exemplified by Cu, Ag and Au. Optical excitation of these metal nanostructures at their plasmonic resonance provides a means of controlling temperature at the nanoscale, which can be controlled by the size, shape and organization of the nanostructures. Non-radiative relaxation of optically excited plasmons has enabled a number of photothermal nanotechnology applications that include cancer therapy and drug delivery, pollution control, photocatalysis, thermometry and surgery.

The photothermal effect can also operate through the non-radiative relaxation of phonons when organic or inorganic semiconductors are excited at energies above the electronic bandgap and when metals are excited at intra-band and inter-band energies. These excitations can result in localized heating of individual semiconductor and metal nanostructures in an array or delocalized heating of all the nanostructures in the array through collective thermal effects. The resulting temperature distribution in the array will depend on a host of nanostructure parameters that include, element composition, size, shape and geometrical arrangement, specific heat, mass density and absorption cross-section, thermal conductivity and dielectric constant of substrate and surrounding environment, light intensity, wavelength, polarization, continuous or pulsed illumination, monochromatic or polychromatic nature, and area of the illumination. Photothermal effects in semiconductor and metal nanostructures provide a means of controlling local temperatures enabling for example gas-phase light-assisted heterogeneous photocatalytic splitting of water and conversion of carbon dioxide into fuels such as carbon monoxide, methane and methanol.

Recently, an electro-polymerized black coating of poly-pyrrole grown on a stainless steel mesh, made hydrophobic by surface modification of the poly-pyrrole with a fluoroalkylsilane, was used as a photothermal membrane for local heating of interfacial water to enable water evaporation driven desalination. This solar absorbing membrane was employed in a proof-of-concept all-in-one solar distillation system for producing fresh water from salt water [3]. The evaporated water was transferred by a solar powered fan to a condensing chamber as depicted in the diagram to complete the photothermal desalination cycle.

Interestingly, little has been reported on photothermal desalination, whereby optically excited highly absorbing nanostructures have been integrated into porous membranes to selectively power surface evaporation of water using both the light and heat from the sun. Today, there exist quite a large collection of black nanostructures and black nanocomposites based on various kinds of carbons, metals and semiconductors and combinations thereof that could be made hydrophobic and stable in light and salty water. They could be used to coat the surface of different kinds of porous membranes providing them with the structural and physicochemical properties required for the development of an energy efficient and cost effective photothermal desalination system. This desalination system may take myriad forms to function in a wide range of environments. Moreover, it can be combined, integrated and scaled to accommodate every type of climatic condition anywhere.

It will be interesting to see how the emerging field of photothermal materials applied to solar powered water desalination develops in the years ahead as the global demand for clean and secure freshwater supplies increases due to the combined effects of climate change and droughts, industrial expansion and environmental pollution, population growth, food demand and agricultural needs. In an increasingly thirsty and energy hungry world, maybe it makes more sense for large centralized RO and TD desalination plants to service the water demands of large cities while small decentralized TD ones that make use of photothermal desalination can serve small communities, industries and farms.