Spanish researchers have mixed waste from the paper industry with ceramic material used in construction to make a brick that has low thermal conductivity. 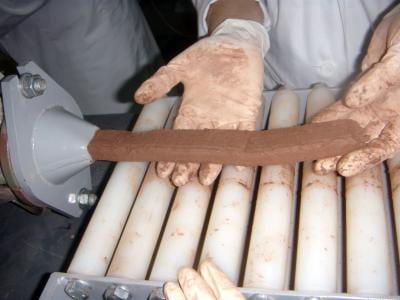 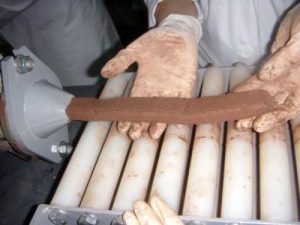 The bricks come out of the machine “like sausages” and are then cut. C. Martinez et al., Universidad de Jaén.

Researchers at the University of Jaen (Spain) have mixed waste from the paper industry with ceramic material used in the construction industry. The result is a brick that has low thermal conductivity, meaning it acts as a good insulator. However, its mechanical resistance still requires improvement.

“The use of paper industry waste could bring about economic and environmental benefits as it means that material considered as waste can be reused as raw material.” – This is one of the conclusions of the study developed by researchers at the Upper Polytechnic School of Linares (University of Jaen), which has been published in the journal Fuel Processing Technology.

The scientists collected cellulous waste from a paper factory (recycled waste in this case) along with sludge from the purification of its waste water. In their laboratory they then mixed this material with clay used in construction and passed the mixture through a pressure and extrusion machine to obtain bricks.

“Adding waste means that the end product has low thermal conductivity and is therefore a good insulator,” explains Carmen Martínez, researcher at the University of Jaen. “In addition to the resulting benefit of using these bricks instead of their traditional counterparts made of traditional raw materials.”

Another of the advantages of adding waste to the brick prototypes is that they provide energy due to their organic material content. This could help to reduce fuel consumption and kiln time required for brick production.

At the moment the prototype’s dimensions are small (3 x 1 x 6 cm). But the team has already tested larger bricks and the results are similar. “On the whole, this technique could bring about a saving in energy and raw materials for brick factories along with environmental benefits from the use of waste that is initially discarded,” adds Martínez.

The researcher recognises, however, that the Achilles heel of these bricks is their lower mechanical resistance compared to traditional bricks, although this parameter is above the legal minimum. There are still a few problems to solve in the adherence and shaping of those pieces that have high percentages of paper waste.

The team continues in their search for the happy medium between sustainability and material resistance and is still researching the advantages of adding other products, such as sludge from water treatment plants or residues from the beer, olive and biodiesel industries.