Electrospinning and plasma polymerization are combined to provide vascular graft scaffolds that are mechanically compliant and biocompatible. 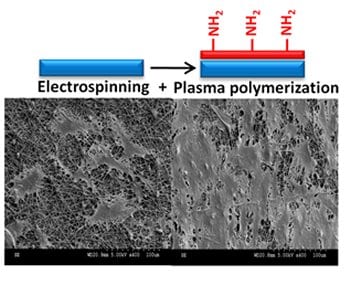 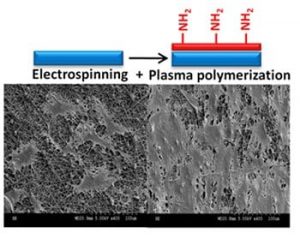 Cardiovascular diseases are the dominant cause of premature death worldwide. Bypass surgery is the common treatment for diseases involving small-diameter blood vessels when angioplasty or stenting are not feasible. Unavailability of healthy autologous replacement vessels, among other reasons, has prompted the development of synthetic vascular graft prostheses. Currently available large-diameter synthetic grafts are ineffective as small-diameter replacements due to clot formation, inadequate surface properties that cause cell-detachment in high velocity blood flow, and general lack of patency. Additionally, the mechanical properties of those synthetic grafts poorly match those of native blood vessels. Pre-endothelialization of the lumen has shown promise as a strategy to improve the performance of small-diameter synthetic grafts, but it is still handicapped by poor adhesion and retention of endothelial cells (ECs).

The extracellular matrix inside human blood vessels possesses a 3D random nanofibrous structure that may be adequately mimicked by synthetic nanofiber mats in regard to mechanical and morphological properties. Electrospinning is the ideal technique for producing such highly porous, large surface area scaffolds. Electrospun poly(ethylene terephthalate) (PET), in particular, exhibits the relatively low stiffness and favorable strength of interest for vascular graft applications, its tensile properties being comparable to those of natural arteries.

Michael R. Wertheimer and Sophie Lerouge (Montreal, Canada) now show that the morphology of electrospun nanofiber networks proved suitable for forming a surface-bound EC monolayer, unlike conventional vascular grafts (ePTFE or woven PET), where cells migrate inside the material. PET is chosen because it is stable, cost-effective and cyto-compatible, with tunable properties, and because PET-based vascular implants have already received FDA-approval. However, such scaffolds must undergo a suitable surface modification for optimum biocompatibility and to favor the growth of a confluent, stable EC monolayer. The issue of blood shear-induced cell detachment additionally underscores the need to promote cell-adhesion. This is accomplishedby coating the electrospun PET mats with an ultra-thin amine-rich plasma polymer film, known to promote cell adhesion.

The present research shows that the resulting bioactive scaffolds possess mechanical properties close to those of the extracellular matrix beneath the luminal endothelium, and surface-biological characteristics that favor EC adhesion, growth and resistance to flow-induced shear. This could be highly advantageously used for pre-endothelialization of the lumen of small-diameter vascular prostheses and for reducing their risk of occlusion. It is foreseen these improvements constitute an important step towards helping overcome clinical complications associated with current generations of off-the-shelf vascular prostheses.