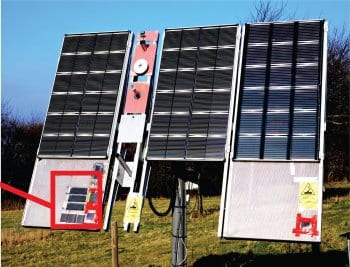 Stability of organic solar cells (OSCs) has direct implications on the application-, environmental-, and cost-effectiveness of the technology. Encapsulations of the OSCs play the most crucial role in rendering stability to the modules by providing protection against environmental factors such as water, oxygen, and UV radiation; these factors causes rapid degradation in the OSCs materials resulting in deterioration of the photovoltaic properties over time.  While the main aim of encapsulation is to prolong the stability of a solar cell, however, it should also satisfy the technological goals of the specific technology which in the case of OPV includes transparency, flexibility, and processibility with low-cost printing and coating techniques.

In new work by F. C. Krebs et al. a low-cost encapsulation method was adopted for ITO-free large-area OSC modules (70-100 cm2) and their stability was consequently evaluated under outdoor operational conditions (on a solar tracker or on rooftops) and storage conditions (indoor storage in a room) for a duration exceeding one year. The encapsulation was achieved by laminating them the between two sheets of simple low-cost food-packaging barrier material adhered to the modules using a UV-curable adhesive. The encapsulated modules were operated in outdoor conditions over 1 year simultaneously in India and Denmark (Gen-I).

The preliminary results revealed various encapsulation shortcomings that were causing rapid degradation of the modules. It was found that degradation was not homogenous throughout the modules but originated from specific locations in the modules. These locations include the edges as well as the button-contact that is pierced through the encapsulated module for making external electrical connection. By making simple changes in the method of encapsulation, the modules were evaluated again for one year in outdoor and storage conditions in Netherlands and Denmark simultaneously (Gen-II). The stability of these Gen-II modules was found to be significantly higher in comparison to those of Gen-I, with the best Gen-II module in both outdoor and storage conditions performing above 95% of their respective initial efficiency.  By using a combination of various imaging techniques, a thorough examination was conducted to determine on the route of degradation which successfully led to the identification of the most degradation susceptible material in the modules.

X-rays reveal in situ crystal growth of lead-free perovskite solar panel materials
The temporal politics and ethics of hydropower development in the Himalayas
One-shot radical polymerization for hydrogels
How do we take the methane out of natural gas?