Orange fruit vs. turpentine – aspects of molecular chirality at surfaces 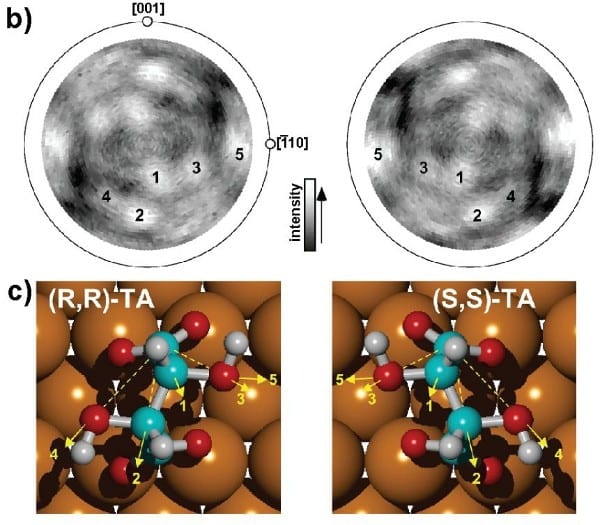 Chirality is an interesting phenomenon that we are intuitively familiar with from everyday life: macroscopic objects such as shoes, screws, or our hands are not superposable with their mirror images. Chemists and biologists, however, are particularly intrigued when chirality occurs on a much smaller length scale; nowadays molecules are known that have groups of atoms whose arrangement determines the molecule’s handedness, just like the arrangement of our fingers differentiates the left from the right hand.

In his topical review article that appeared in physica status solidi (b) on 20 September 2012, Prof. Dr. Karl-Heinz Ernst from the University in Zurich gives a phenomenological overview of past and current efforts to understand the involved surface-chemical aspects of effects that arise due to chirality. He first outlines the history of this field that became established after the existence of chiral substances was initially concluded from the observation of different optical activities in the 19th century. Ernst points out that while physical properties (e.g. solubility, hardness, melting and boiling point) of substances with different handedness are typically identical, their biological activity can change drastically: in the case of limonene the smell varies from “orange fruit” to “turpentine”.

Giving manifold examples in his article, Ernst discusses that chirality of adsorbates on surfaces evolves in different ways. It might already be present in the individual building blocks of a more complex structure, or it might be a consequence of the delicate interplay of hydrogen bonds, Coulomb and van-der-Waals forces, and the polarity of the adsorbates. Seeds also play a role and the presence of chiral crystals during growth can lead to chiral footprints in the end product. Ernst points out how, particularly in recent years, the joint efforts of state-of-the-art experiments and modern simulations lead to a deeper understanding of such highly interesting but complex processes. Eventually, he highlights that understanding these fundamental questions might lead to exciting applications, for instance related to catalysis, but also more speculative ones: inducing the switching between different chiralities upon inelastic electron scattering can even drive a unidirectional molecular rotor.