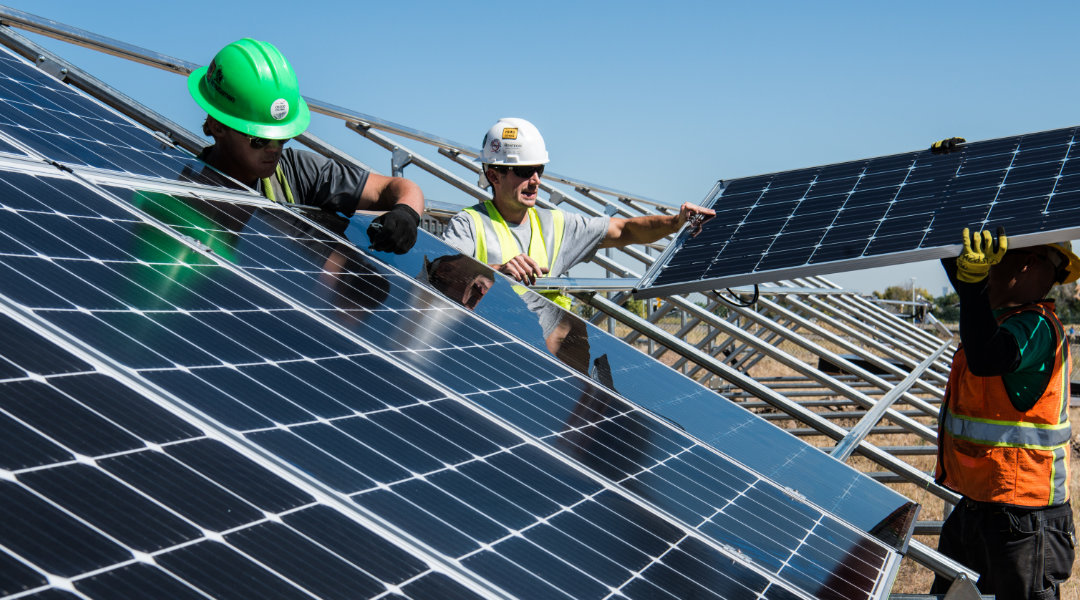 Currently, over 95% of the world’s hydrogen production processes, like steam reforming of natural gas, partial oxidation of methane, and coal gasification, require the use of fossil fuels. As a result, the production of one ton of hydrogen simultaneously produces eight to twelve tons of carbon dioxide. In 2019 alone, 70 million tons of hydrogen were produced worldwide, and these numbers are predicted to rise.

In contrast to fossil fuel-based hydrogen production, solar-powered water splitting via electrolysis does not produce any CO2 emissions and has been the subject of intensive research efforts in recent decades. Here, hydrogen and oxygen are separated by a photovoltaic current generated inside what is known as an electrolyzer — a cell that contains an anode and a cathode to catalyze the water splitting reaction. Today, photovoltaic electrolysis systems that use several photovoltaic modules connected with electrolyzers present the most mature technology for solar hydrogen production. These photovoltaic electrolysis systems are called photo-electrochemical cells or PECs as they generate solar electrical energy and convert it chemically to hydrogen.

While progress in this area is promising, it is very challenging to compete with conventional technologies in terms of cost i.e., fossil fuels are still relatively very cheap. There are several small-scale demonstrations of photovoltaic electrolysis systems with more than 15% solar-to-hydrogen efficiency. However, the use of power electronics and a significant number of necessary auxiliary components such as control circuits, connectors, monitoring, and measuring units increases the cost of hydrogen production.

Thus, a team of researchers from SABIC Corporate R&D at King Abdullah University of Science and Technology (KAUST), Saudi Arabia, built a photo-electrochemical system that integrates the photo-absorber with catalysts to provide an opportunity for cost reduction. According to team leader Professor Hicham Idriss (Fellow at SABIC and Hon. Professor at the Department of Chemistry, University College London (UK)), there were several challenges associated with developing a new photo-electrochemical system for industrial scale hydrogen production. First is scale-up and the fact that the new developed photo-electrochemical devices are yet less progressed and have efficiencies lower than long established photovoltaic electrolysis systems.

The team’s findings were recently reported in the journal Angewandte Chemie, in which they successfully designed, fabricated, and tested a photo-electrochemical reactor to address these challenges. “One of the young scientists in the team said why don’t we just glue a thin foil on the back of the cell, and after many failed trials it worked perfectly as a catalyst and for heat management,” said Idriss.

The final system is comprised of an integrated photovoltaic electrolysis device to balance the cost of the system and uses concentrated sunlight to reduce the cost of the photo-absorber. Additionally, the KAUST researchers employed an alkaline electrolyte in their electrolyzer, which supplies the ionic conductivity within the photovoltaic electrolysis device. This way, the KAUST researchers reduced the catalyst cost and eliminated external thermal management needs.

The novel photo-electrochemical reactor for hydrogen production from water worked close to the maximum theoretical efficiency (ca. 18.3 ±0.7%) at low light. Under higher light concentration and using optical lenses, the hydrogen production rates increased at a constant solar-to-hydrogen efficiency of approximately 13 ±0.6%. Finally, catalytic tests conducted for over 100 hours showed no sign of degradation nor variation from the achieved hydrogen output; further tests suggest that the system could be stable for year, said Idriss.

But there is still potential for optimization. “We lose a good deal of energy still, because the cells give more than the needed voltage to split water. We need to design a cell with either twice the voltage at high concentration or connect two of them to power three units. Both are possible,” Idriss said. Before getting into that, they have to conduct an economic, technical, and financial analysis to ensure that further research is worthwhile.

“The major challenge in solar water splitting is in making a stable and affordable system for largescale applications,” Idriss concluded. “For hydrogen, we do not know how to make very large electrolyzers yet.”