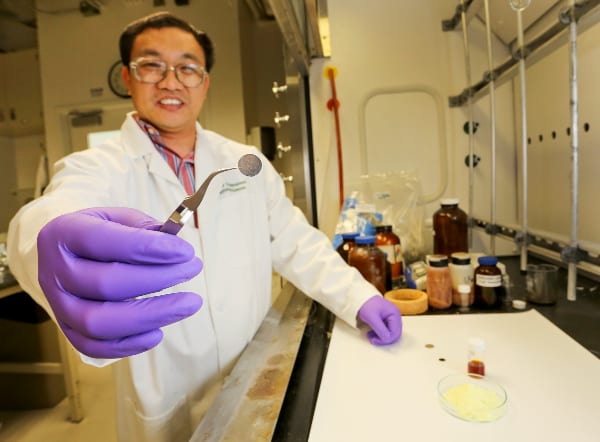 Scientists at the Department of Energy’s Oak Ridge National Laboratory have designed and tested an all-solid lithium-sulfur battery with approximately four times the energy density of conventional lithium-ion technologies that power today’s electronics. 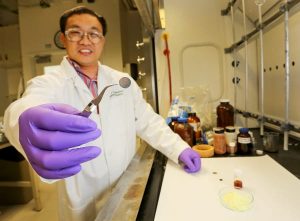 “Our approach is a complete change from the current battery concept of two electrodes joined by a liquid electrolyte, which has been used over the last 150 to 200 years,” said Chengdu Liang, lead author on the ORNL study.

Scientists have been excited about the potential of lithium-sulfur batteries for decades, but long-lasting, large-scale versions for commercial applications have proven elusive. Researchers were stuck with a catch-22 created by the battery’s use of liquid electrolytes: On one hand, the liquid helped conduct ions through the battery by allowing lithium polysulfide compounds to dissolve. The downside, however, was that the same dissolution process caused the battery to prematurely break down.

The ORNL team overcame these barriers by first synthesizing a never-before-seen class of sulfur-rich materials that conduct ions as well as the lithium metal oxides conventionally used in the battery’s cathode. Liang’s team then combined the new sulfur-rich cathode and a lithium anode with a solid electrolyte material, also developed at ORNL, to create an energy-dense, all-solid battery.

“This game-changing shift from liquid to solid electrolytes eliminates the problem of sulfur dissolution and enables us to deliver on the promise of lithium-sulfur batteries,” Liang said. “Our battery design has real potential to reduce cost, increase energy density and improve safety compared with existing lithium-ion technologies.”

The new ionically-conductive cathode enabled the ORNL battery to maintain a capacity of 1200 milliamp-hours (mAh) per gram after 300 charge-discharge cycles at 60 degrees Celsius. For comparison, a traditional lithium-ion battery cathode has an average capacity between 140-170 mAh/g. Because lithium-sulfur batteries deliver about half the voltage of lithium-ion versions, this eight-fold increase in capacity demonstrated in the ORNL battery cathode translates into four times the gravimetric energy density of lithium-ion technologies, explained Liang.

The team’s all-solid design also increases battery safety by eliminating flammable liquid electrolytes that can react with lithium metal. Chief among the ORNL battery’s other advantages is its use of elemental sulfur, a plentiful industrial byproduct of petroleum processing.

“Sulfur is practically free,” Liang said. “Not only does sulfur store much more energy than the transition metal compounds used in lithium-ion battery cathodes, but a lithium-sulfur device could help recycle a waste product into a useful technology.”

Although the team’s new battery is still in the demonstration stage, Liang and his colleagues hope to see their research move quickly from the laboratory into commercial applications. A patent on the team’s design is pending.

“This project represents a synergy between basic science and applied research,” Liang said. “We used fundamental research to understand a scientific phenomenon, identified the problem and then created the right material to solve that problem, which led to the success of a device with real-world applications.”